The national leader of the All Progressives Congress, Bola Tinubu, who has emerged as the presidential candidate of the party, has assured opponents including Vice-President Yemi Osinbajo, that he holds no grudge or grievance against them.

Tinubu, while giving his remarks after winning the presidential primaries of the party at the Eagle Square, Abuja, on Wednesday, said those who competed against him have nothing to fear.

Meanwhile, Vice-President Osinbajo, who was said to have enjoyed a cordial political relationship with Tinubu refused to step down.

Many supporters of the former Lagos governor criticised Osinbajo for contesting the presidential ticket of the APC with his former boss.

Osinbajo served as Commissioner for Justice and Attorney General of Lagos State between 1999 and 2007 when Tinubu was the state governor. He had recently claimed he was instrumental in the appointment of Osinbajo as Vice-president.

Other aspirants also continued with the contest with some of them noting that they wouldn’t step down for any reason.

After being declared the winner on Wednesday, Tinubu informed his opponents that they have nothing to fear as he holds no grudge against them.

Tinubu’s speech reads, “We have been at historic Eagle Square for many hours such that day has turned into night and night back into day.

“Because of your democratic exertion, this convention shall be recorded as a shining moment in the evolution of our party and the life of our nation.

“I must thank you all for making me the standard-bearer of our progressive party. And I humbly accept the nomination of this convention to be the presidential candidate of our enlightened, humanitarian and great party, the All Progressives Congress.

“I also offer my sincere gratitude to President Buhari for his calm and prudent leadership throughout this process. I thank him, also, for his steadfast determination to ensure a level playing field and a free and fair primary process for every aspirant. Without him, I would not be standing here today as the new flag bearer of Nigeria’s party.

“I thank the governors for their invaluable contribution to internal democracy and unity.

“I commend the party leadership and organizers for the conduct of a successful convention.

“Thank you, the delegates, for the confidence you have shown in me. I will prove that your choice was a wise one. You have moved our party and country towards its best future. On your mandate, I shall stand.

“I commend my fellow aspirants. It is a difficult thing to run for president. The stiff and bold competition you offered made our party stronger and made me better. I must say a special word of thanks to the seven aspirants [Alhaji Badaru Abubakar; Sen.; Ibikunle Amosun; Sen. Ajayi Borrofice; Rt. Hon. Dimeji Bankole; Sen. Godswill Akpabio; Dr. Kayode Fayemi; and Barr.(Mrs.) Uju Kennedy] who chose to step down their personal ambitions for the good of the party and the unity of our purpose.

“The competition is now over. Those who did not support me, you have nothing to fear. I hold no grudges or grievances.

“Let us each agree to join hands in defeating the PDP and beating back our common foes of poverty, terror and violence. We now have a date with destiny in February 2023. Let us win so Nigeria can become the nation it is intended to be.

“To my campaign team and close advisors. Your dedication, long hours, and sound advice have brought me to this point.

“I thank my beautiful wife, Oluremi, for her patience and wise counsel. Thank you for standing by my side. I am indeed a fortunate man.

“Now, permit me to address the nation. Yes, we face serious problems. But I believe that we have it within us to reach our finest destiny. With help from God, we shall make this nation better for the generations to come.

“President Muhammad Buhari has already laid a solid foundation in security, economy, and anti-corruption. We will build upon this for the salvation of our people.

“So, I ask you: Do we dare reform our national economy such that prosperity grows as poverty vanishes?

“Yes, we dare. Do we dare provide meaningful education and jobs for our youths so that they may strive for a better future?

“Yes, we dare. Our teeming youth population is our nation’s greatest asset. We will create jobs for our youth from the Zamfara and Osun gold deposits to the vast agricultural lands across the country. We will create new opportunities in the FINTECH sector, the creative and entertainment industries, digital skills and other areas.

“Do we dare feed our nation and provide the farmer a solid income for his toil? Yes, we dare.

“Do we dare construct a society where the vulnerable, the weak, the disadvantaged and the elderly are attended to and loved? Yes, for we must care for those who cannot care for themselves.

“Do we dare muster our collective strength to conquer terrorism, kidnapping, and violent evil of any form? Yes, we dare.

“After the PDP convention, I commended Abubakar Atiku. The ensuing contest between our party and his will be one of competing visions.

“Our vision is of progress and the future that can be. We must defeat the PDP’s reactionary ideals. Our better, more progressive vision of Nigeria shall secure a better society for all Nigerians.

“May this be our task arising from this convention. Let nothing stand in the way of our achieving a more just society and a greater Nigeria. 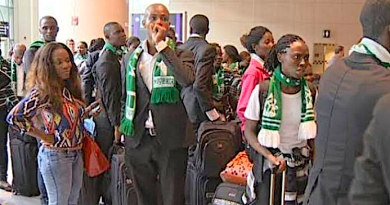 From Ukraine Down To Uromi, Calm Down Seems To Be The Buzzword – The Nigerian Voice

I’m More Qualified Than Osinbajo Because While I Was Rivers Assembly Speaker, He Was Just A Commissioner – Amaechi