Governors who are members of the All Progressives Congress (APC) have submitted the names of five presidential aspirants to President Muhammadu Buhari to select a consensus candidate from.
A reliable source revealed that the governors submitted the names in the early hours of Tuesday, Daily Trust reports.

The names, according to the source, included that of the Vice President, Yemi Osinbajo, former governor of Lagos State, Bola Tinubu, Governor Kayode Fayemi (Ekiti State) and Governor Dave Umahi (Ebonyi State).
The governors had after meeting with the President said they would return to the villa after meeting with the party’s National Working Committee (NWC) and other stakeholders.
“They picked one from South-East, one from South-South and three from South-West geopolitical zones in line with their position that power should shift to the South,” he said.
He said the president is expected to pick from the list.
The presidential primary of the party holds today.
The Senate President, Ahmad Lawan was named as the consensus candidate by the National Chairman, Senator Abdullahi Adamu. This was, however, punctured by the presidency.
The ruling APC National Working Committee had also said it was not part of the endorsement of Lawan, as the consensus presidential candidate of the party.
The NWC in an interview had said the National Chairman of the party, Abdullahi Adamu, who made the announcement spoke for himself, while they (the committee) stood with the position of the Northern governors and of the President that the presidency should go to the southern region in 2023.
“We are full briefed by our chairman and he told us the Senate President, Ahmad Lawan, is the consensus candidate of the party but it is not an issue that has been discussed on the floor of the NWC. You are all aware that about two days ago, the northern governors had a meeting that the leadership of this country should go to the south. So, the NWC are with the governors. Just some minutes ago, the northern governors went to the president to say they are still on what they said with regards to power shift to the south.
“The chairman and all of us are entitled to our opinion. This decision was never taken by the NWC,” Sulaiman Argungu, the National Organising Secretary had said.
SaharaReporters earlier reported that Buhari also denied that he endorsed Lawan, which was in contrast to an earlier proclamation by Adamu.
No fewer than 13 Northern Governors of ruling All Progressive Congress after their meeting on Monday also confirmed that Buhari had no preferred candidate in the party primary election that started in Abuja.
The governors had revealed this shortly after meeting with Buhari at the State House in Abuja.
Plateau State Governor, Simon Lalong who spoke to newsmen after the meeting, added that the northern governors had agreed that power should shift to the South.
They had also met with the National Working Committee of the party.
The President’s meeting with the APC governors from the north is the fourth parley in his effort to have a harmonised position prior to the convention.
Those present at the meeting are  the Chairman of the Progressive Governors Forum and governor of Kebbi State, Atiku Bagudu, chairman of the Northern governors Forum and governor of Plateau State, Simeon Lalong, Abubakar Baduru (Jigawa) and Babagana Zulum (Borno).
Others are Aminu Bello Masari (Katsina), Abdullahi Sule (Nasarawa), Bello Matawale (Zamfara), Mallam Nasir el-Rufai (Kaduna), Abdullahi Ganduje (Kano), Yahaya Inuwa (Gombe), Abubakar Bello (Niger), and the Yobe State governor, Mai Mala Buni.
Despite Buhari’s denial, SaharaReporters learnt that he indeed confided in the APC National Chairman, Abdullahi Adamu, that Lawan was his choice but never instructed him to make it public.
“Buhari will deny that he anointed Senate President, Lawan as consensus candidate. Although Buhari confided in Adamu, that he prefers Lawan, he didn’t tell him to announce it.
“Governors had pigeon holed Buhari by asking the presidency to go south and El- Rufai got wind of it and leaked their position to the press to pressurize Buhari not to to endorse Lawan,” one of the top sources had revealed.
Earlier, the National Chairman of the All Progressives Congress (APC) announced Senate President Ahmed Lawan as the consensus presidential candidate of the party.
Adamu made the announcement at the meeting of National Working Committee (NWC) on Monday in Abuja.
His adoption of Lawan as consensus candidate is against the position of 11 APC northern Governors, who endorsed that power must shift to the South after President Muhammadu Buhari’s tenure.
Adamu told the National Working Committee that he arrived at the choice of the Senate President after consultation with Buhari. 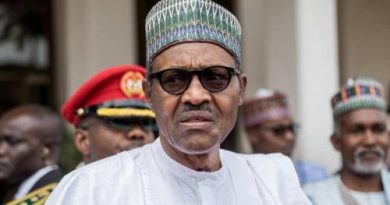 She Can Keep Me, For One Month, By Azu Ishiekwene