The returning officer and South-South chairman of YPP, Tosan Blessing, declared Ofehe the governorship candidate of the party in the 2023 general elections and subsequently presented him with a certificate and flag of the YPP.

In his acceptance speech, the environmental rights activist noted that the state was too endowed with mineral resources and potential, hence the YPP cannot afford to continue to sit idle and allow looters access to the common patrimony, leaving the state undeveloped.

Ofehe, however, urged party faithful and Deltans to reject the Peoples Democratic Party (PDP) and All Progressives Congress (APC) in 2023, adding that he was in the race as “a voice of the voiceless” and a pathfinder for the deprived and the underprivileged.
He lamented that the state has lost 24 years due to “maladministration resulting from unpatriotic spirit of those who lay the foundation of our pitiable state amidst plenty.”
“Delta is abound in crude oil resources and natural gas that are already being managed and wasted by the Federal Government. We will ensure a paradigm shift from the manners these God-given resources are tapped and utilised. The result of what we will do with these funds that will come in the form of federal allocation will abound.
“We know we can replicate it because as a state with the highest number of tertiary institutions, we can boast of adequate human capacity. This is why I am appealing for your commitment, this is why I want you to take this race as a movement that must come to fruition. We must join hands with the leadership of our dear party to see us through this race,” Ofehe said. 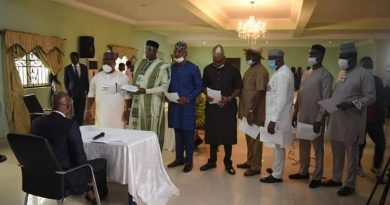 Court To Hear N712m Case Against Lamido – – The Tide