Members of a civic group, the Global Coalition for Security and Democracy in Nigeria, GCSDN, have petitioned the Economic and Financial Crimes Commission and the Independent Corrupt Practices and other related offences Commission to arrest and prosecute Adam Namadi, an aspirant under the Peoples Democratic Party.
Namadi, who is the son of former Vice President Namadi Sambo, was hoping to become the 2023 (PDP) flag bearer to represent Kaduna North Federal constituency at the House of Representatives but scored only two votes at the primary election, putting him at 12 votes behind the runner up.

He publicly stated that he spent N76 million on delegates to influence the outcome of the primary elections for the ticket of the House of Representatives, Kaduna North Federal Constituency but upon failure to clinch the ticket, asked for a refund.
Reacting in a petition signed by Frederick Odorige the global coordinator of the GCSDN, the group condemned the action and called for Namadi’s arrest noting that “bribery in any form or shape to corrupt elections and misdirect the will and expectations of the people for personal gains, is criminal.”
The group said, “The ICPC Act ss. 8-26 criminalises (1) accepting gratification, (2) giving or accepting gratification, (3) bribery of public officers, (4) use of office or position for gratification…..Elections are the cornerstones of democracy.
“Must we continue to allow the machinations of a few persons to impose unpopular and unacceptable candidates on the people? This form of corruption is the genesis of bad governance in Nigeria. The corrupt politicians you are dealing with today are manifestations of those that bribed their ways into public offices.
“When they come into the office, they desperately fight to recoup what they corruptly invested into the electioneering process. Bribing party delegates is an offence that is similar to the offence of bribe received by INEC officials who were prosecuted and jailed for their corrupt roles in previous elections.”
“We hope that this petition will be an opportunity to investigate and arrest all other persons who paid and received money as aspirants and delegates respectively in this election and other elections involving other political parties.
“Sirs, if this culture of commercializing and corrupting our electoral system is allowed to continue, elections in Nigeria will definitely lose its true values and result in international disgrace as the world watches. Please do not allow this to happen under your watch. We look forward to your prompt response.” 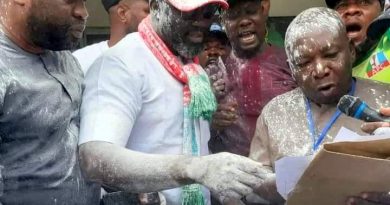