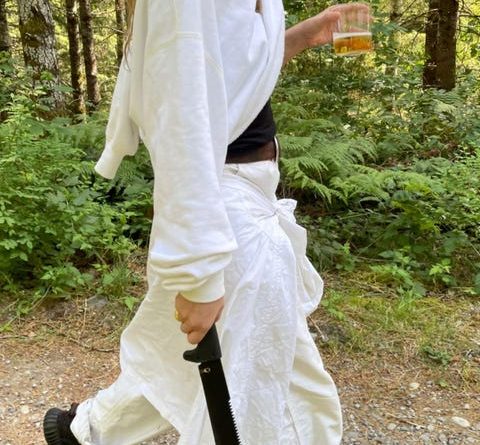 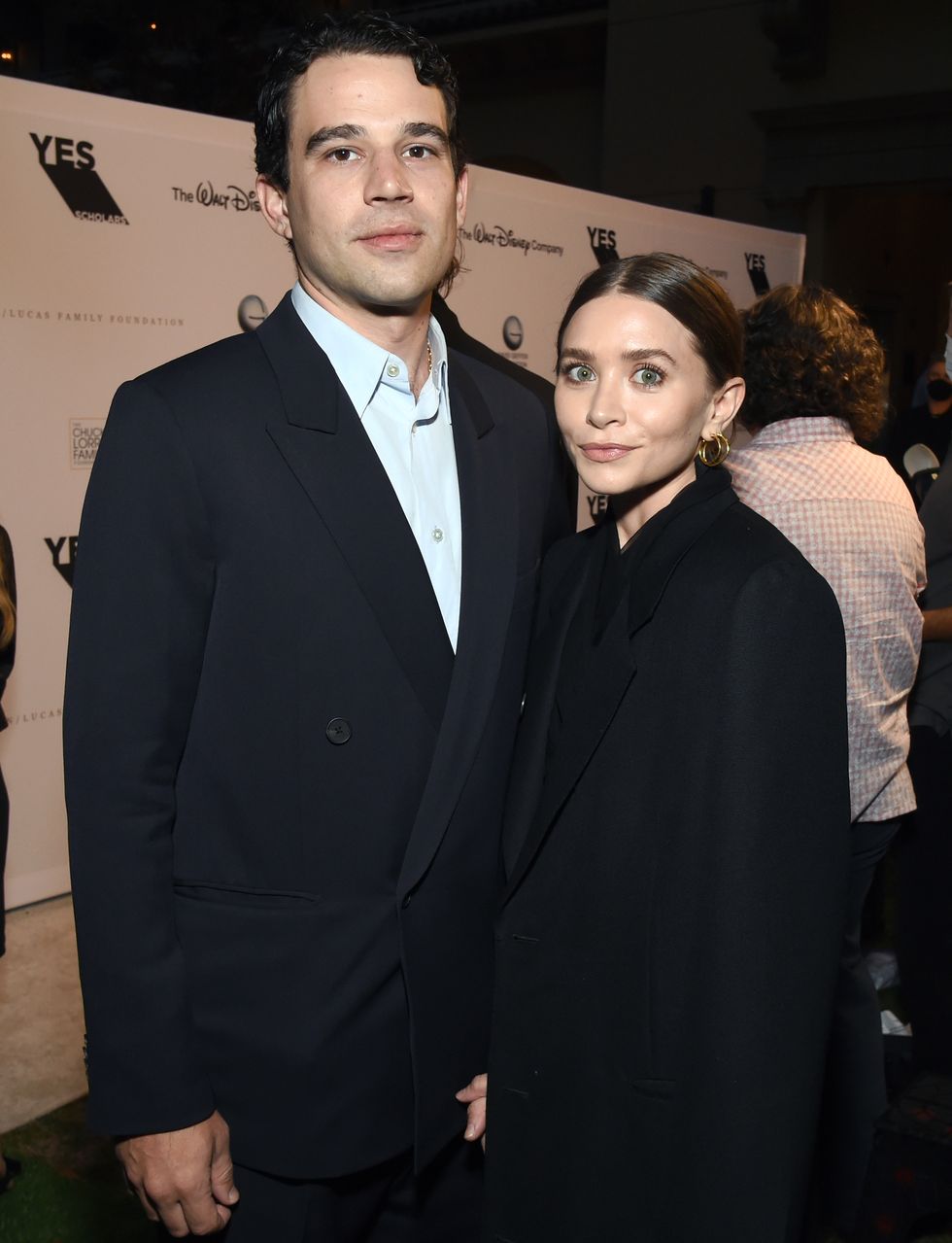 Ashley Olsen and her twin Mary-Kate Olsen have kept their lives as private as two world-famous child stars-turned-adult designers can manage. But while the girls haven’t spoken about their love lives, the tabloids and paparazzi have gotten some details on who they’re with. Mary-Kate has been married to Olivier Sarkozy since 2015 but requested an emergency divorce in May 2020, during the coronavirus pandemic. That divorce was finalized in January 2021.

Ashley, meanwhile, is currently dating a 33-year-old artist, Louis Eisner. The two have been photographed together a couple times. After nearly a year not being seen, they signaled their relationship is still on and strong in March 2021 when they were photographed out in New York City on a date. On July 9, 2021, Eisner made a very rare move: posting a photo of Ashley on his Instagram Story. Yes, she’s carrying a beer and machete for reasons unspecified:

On July 18, 2021, they were seen holding hands after dinner at Balthazar in NYC—a very rare public outing for these two.

And on September 23, 2021, the two attended their first event together: the YES 20th Anniversary Gala:

In May 2022, Ashley sparked rumors the two may be married when she was photographed wearing a gold band on her left ring finger.

Here, details on who Eisner is along with his and Ashley’s dating history.

What does Louis Eisner do?

Eisner is a bicoastal artist who grew up in California. His mother Lisa is a famous fashion photographer and jewelry designer, so there’s art in his blood. He wrote a glowing caption about her on his Instagram for Mother’s Day 2019. “You gave me life and also taught me how to find its magical beauty,” he wrote to her. “Forever thankful to you and all the mothers in the world.”

He was featured in Interview back in December 2010, where the outlet noted that Eisner went to Columbia University and studied art history. He was part of Still House Group, a collective of young artists, for years after he graduated.

You can see some of his paintings formerly on auction at Artnet.com. He has a more abstract style. Apparently Ivanka Trump bought an Eisner piece in 2013, so his work is part of her art collection.

How old is Eisner?

Eisner was born on July 31, 1988, so he’s now 33. He shared a shot from his high school yearbook on his Instagram, which publicly revealed his birth date. He’s a Leo!

When did he and Ashley meet and start dating?

Not much has been revealed about the two’s romance. RadarOnline reported back in February 2019 that the two quietly started dating in 2017 after being just friends for years. Grazia notes they were first seen publicly at the Hammer Museum’s Gala in the Garden in October 2017.

They allegedly met through mutual high school friends and have known each other for more than five years.

Are Ashley and Louis close with Mary-Kate and Olivier Sarkozy?

When that Mary-Kate first separated from her husband of nearly five years in May 2020, Ashley was supportive of her sister during this time. A source told E! that Mary-Kate was quarantining with Ashley and a group of friends outside of New York City. “It’s gotten very ugly between them [Mary-Kate and Olivier],” the source said, referring to it as a “heated divorce.” Mary-Kate is “done with constant drama,” the source added.

But before Mary-Kate and Olivier’s relationship ended, they were seen out a few times with Ashley and her significant other. In June 2019, the sisters celebrated their 33rd birthdays with Eisner and Sarkozy by their sides, according to E!. And in November 2019, the Daily Mail ran photos of the Olsen twins with their respective partners, double-dating at Bowery Hotel’s Gemma restaurant in New York City.

How serious are Ashley and Eisner now?

Radar’s source in February 2019 said the two were “very much in love.”

An insider also explained to Radar that Eisner likes his privacy, and that’s why he hasn’t walked any red carpets with his girlfriend. (Ashley seldom walks red carpets, for what it’s worth.) “It’s not that they are trying to keep their relationship on the down low, Louis just doesn’t like the spotlight—even less so than Ashley,” the source said.

Back in 2018, a source told the outlet that they’re not about to get married either. “They’re not in a rush,” Radar’s source said. “He’s a long-term relationship kind of guy, but he doesn’t follow societal norms.”

In Mary-Kate and Ashley’s August 2018 WSJ magazine interview, the outlet noted that Ashley was contemplating moving to Los Angeles full-time. This could be in part because that’s where Eisner has been based. A 2017 New York Times profile on his mom described him as commuting back and forth between Los Angeles and Mexico City.

Eisner has been to some major public events for Ashley. He was at her and Mary-Kate’s 33rd birthday party in New York City, E! reported, where he had dinner with their friends and Mary-Kate’s husband.

On July 29, 2019, the couple made a rare appearance out in Pacific Palisades, California, where they were photographed going to see Once Upon a Time in Hollywood.

And on September 23, 2021, the two finally made their event debut together at the YES 20th Anniversary Gala in Los Angeles:

Did Eisner and Ashley get married in 2022?

Ashley sparked rumors that she may be married when paparazzi photographed her wearing a gold wedding band on her left ring finger while out in New York City on May 8. The designer, who has kept her life extraordinarily private, has not commented on the speculation as of May 10.

Is Eisner on social media?

Eisner has an Instagram, which mostly shows artwork. He does, however, share personal photos from time to time, although he has never posted any of him and Ashley together in the same frame. He posted one about his brother in March 2018.

He also shared a yearbook photo of himself in January 2019, writing, “Tbt Senior page. Forgot to give them a baby photo but now this is my baby photo.”

Has Eisner ever posted a photo of Ashley on his Instagram?

Eisner has kept his relationship with Ashley almost entirely off-line. But on July 9, 2021, he made an exception: He shared a photo on his Instagram Story of Ashley with him during a hike. She was carrying a beer and machete (no, he didn’t specify why). He appeared in other shots in the wilderness and with animals:

How are Eisner and Ashley doing during the coronavirus pandemic?

A year into quarantining, Eisner and Ashley’s relationship is still very much on. The couple of nearly four years now was photographed in New York City on Sunday, March 14 on a double date with friends. Daily Mail ran photos of the two alongside each other in coats. Eisner, in one shot, has an arm around Ashley’s back. According to the outlet, the couple had dinner and wine with W magazine editor-in-chief Sara Moonves and her boyfriend, fashion photographer, Jeff Henrikson.

Alyssa Bailey
Senior News and Strategy Editor Alyssa Bailey is the senior news and strategy editor at ELLE.com, where she oversees coverage of celebrities and royals (particularly Meghan Markle and Kate Middleton).
Hilary Weaver
Hilary Weaver is a freelance writer based in New York who writes about politics, queer issues, Meryl Streep, Glenn Close, and every woman the Queen has ever made a dame. 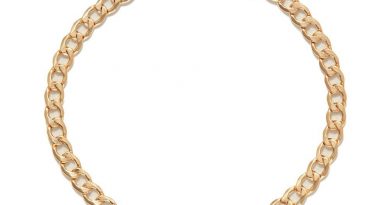 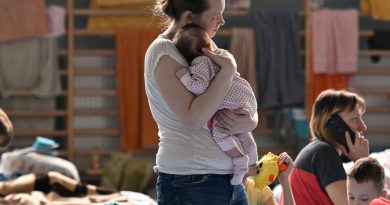 Reproductive Healthcare Should Not Be a Peacetime Luxury