The official history of Nigeria claims that the Independence of Nigeria was won by nationalist politicians on the platter of gold. But contrary to such dubious claim the Nigerian workers, women and the youths who fought for the nation’s independence suffered casualties in the hands of the British colonial police. Apart from killing women who demanded for cancellation of double taxation and workers who demanded better conditions of service the colonial regime jailed young activists who demanded for a socialist reconstruction of Nigeria. In fact, it was for this reason that the British government entered into a class alliance with the nationalist politicians with a view to retaining the status quo in order to protect the interests of imperialism. Hence, flag independence was packaged and bequeathed to the nationalist politicians in October 1960.
When the civilian regime was sacked in 1966 by military officers who later led the nation to fight a civil war and installed a regime of repression and corruption it was the working class and other progressive forces that fought against unending military dictatorship. However, successive military and civilian regimes ensured, through draconian laws and backward civil service rules that Nigerian workers are completely ostracised from the political terrain. It is on record that majority of the politicians who formed the National Democratic Coalition (NADECO) in May 1994 had served military regimes in various capacities. They were therefore involved in the struggle against military dictatorship after the annulment of the results of the June 12, 1993 presidential election won by Bashorun MKO Abiola, only for restoration back to power and preservation of class interests.
At the end of military rule the political class who took over the reins of power have made a complete mockery of constitutional rule and endangered the democratic process. Happily, the Nigeria Labour Congress and Trade Union Congress have resolved to reposition the Labour Party to contest political power with members of the ruling class. In order to achieve the historic objective the labour movement should proceed to mobilise Nigerian workers and allies to embark on mass registration of the members of the Labour Party. This has become a daunting task in view of the undeniable fact that the members of the political class have virtually collapsed the neocolonial State through the implementation of anti people’s political and economic programmes for the past 23 years.

The dividend of democracy promised by the ruling class parties has turned out to be worsening insecurity, gross economic mismanagement and grand corruption. Since the resolution of the labour movement to mobilise the oppressed people of Nigeria to get organised and participate in the electoral politics of the country is going to be questioned by the ruling class it is pertinent to point out that the fundamental right of workers to belong to the Labour Party is recognized by section 40 of the Nigerian Constitution which provides that “every person shall be entitled to assembly freely and associate with other persons, and in particular he may form or belong to any political party, trade union or any association for the protection of his interests.”
Like other citizens, workers are equally entitled, by virtue of section 39 of the Constitution, to freedom of expression, including freedom to hold opinions and to receive and impart ideas and information without interference. In Inspector-General of Police v All Nigeria Peoples Party (2008) 12(WRN 65 the Court of Appeal annulled the issuance of police permit for rallies and other public meetings on the grounds that it was a breach of the fundamental rights of citizens to freedom of expression and association guaranteed by sections 39 and 40 of the Constitution. In line with the judgment, section 83 of the Police Establishment Act 2020 has imposed a duty on the police to provide adequate security for participants in peaceful rallies and public meetings.
In addition to constitutional provisions the Government of Nigeria has ratified the United Nations Universal Declaration of Human Rights of 1948 International Covenant on Economic, Social and Cultural Rights, International Covenant on Civil and Political Rights (ICCPR)5 both of 1966 as well the African Charter on Human and Peoples’ Rights (ACHPR) 1981 which guarantee freedom of association and freedom of expression. Indeed, the right of workers to associate and organise is enshrined in the Freedom of Association and Protection of the Right to Organise Convention 1948 (No. 87)6 and the Right to Organise and Collective Bargaining Convention 1949 (No. 98) of the International Labour Organization (ILO). Section 254C(2) of the Constitution has conferred exclusive jurisdiction on the National Industrial Court to enforce provisions of all ILO Conventions that have been ratified by Nigeria.
In the case of Independent National Electoral Commission v Balarabe Musa & Ors (2003) 10 WRN 1 the Supreme Court faulted the civil service rules which restrict the participation of civil servants and other public servants in the politics of the county. In the leading judgment of the apex court, the Honourable Justice Ayoola JSC held that “There is nothing reasonably justifiable in a democratic society in the interest of defense, public safety, public order, public morality or public health in prohibiting a member of the public service or civil service … from eligibility to be registered as a member of a political party. The submission that the restriction is a valid derogation from section 40 by virtue of section 45 (1)(a) of the Constitution was erroneous.”
In his concurring judgment, Mr. Justice Uwais, the then Chief Justice of Nigeria said that “The provisions of section 40 of the 1999 Constitution are clear. Their import is to allow ‘every person,’ including public office holders and civil servants, the freedom to assemble freely and associate with other persons to form or belong to any political party, or trade union or any other association for the protection of his interests. The section has made no exception and there is no proviso therein limiting its application to civil servants or public officers.”
Even though the civil service rules were not set aside as its legal validity was not challenged in the case, it has been held by the Court in several cases that sections 7, 66 (1); 107 (1) (f); 137 (1) (g); 142(2); 182 and 187(2) of the 1999 Constitution permit civil servants and other public officers who wish to contest elections to resign their positions 30 days to the date of elections for all the various positions of the President and Vice President, Governors and Deputy Governors, Federal and State Legislators as well as Chairmen and Councillors. See FAYEMI v. ONI & ORS (2019) LPELR-46623(CA); PPA v. PDP & ORS (2009) LPELR-4865;(CA); ADAMU V. TAKORI (2010) ALL FWLR (P. 540) 1387 (C.A)
Notwithstanding that the Constitution is silent on the right of workers in the private sector to participate in politics it is submitted that they are equally entitled to contest elections without any legal entanglement. However, like civil servants, private sector workers who wish to contest elections are advised, subject to agreements reached with their employers, and/or the applicable conditions of service, to resign their positions or ask for leave of absence. It is therefore incumbent on workers in the private and public sectors to stop agonising about the problems confronting the country. This is the time to get organised with other pro-labour, radical and human rights forces and insist that a new Nigeria is possible.
Femi Falana SAN,
Interim Chair,
Alliance on Surviving Covid 19 and Beyond (ASCAB)
May Day, 2022. 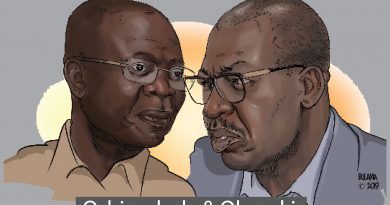