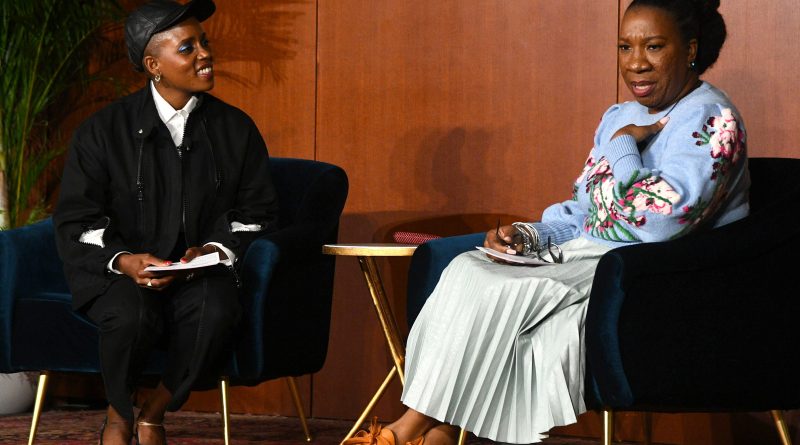 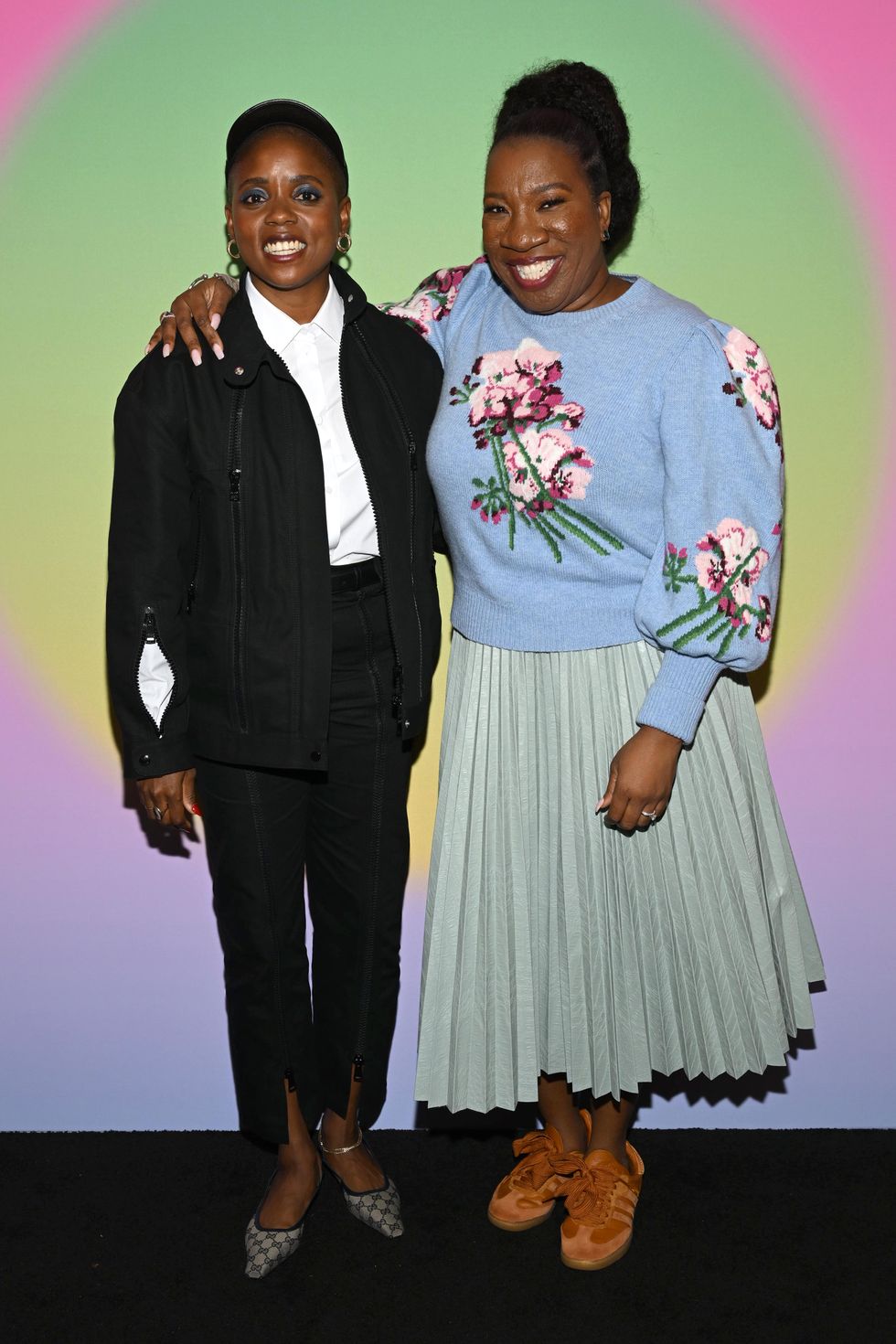 I’m burnt out. I know this is not an original or even particularly illustrative statement to make in 2022, but it is the truth. The news is bleak and often unwieldy. In the U.S., reproductive rights are crumbling, the LGBTQ+ community is being attacked in state legislatures across the country, a new wave of COVID is upon us, all while a devastating war plays out in Ukraine and climate change looms heavy, tucking itself into every corner available. It’s not a time that is particularly rife with hope—which is why I was so surprised to find it in an auditorium at Barnard College this Tuesday.

The evening’s event, titled “22 for ‘22: Visions for a Feminist Future,” was a global gender equity summit put on by media company The Meteor and Gucci’s Chime for Change, and will be broadcast virtually on May 9. The speakers were an intergenerational cohort of activists, organizers, journalists, and artists—people working on some of the most urgent issues of our time. Some were names you’ve heard (actors Busy Philipps and Amandla Stenberg); others have just penetrated the public consciousness, like Chris Smalls, who recently organized Amazon’s very first U.S. union at a warehouse in Staten Island. The question at the heart of the summit was: what should the future look like for women, girls, and nonbinary folks? But the reason we were really there, the underlying probe, was a bit more complicated. Even if we can imagine it, how do we even get to that future? How do we keep up the momentum until that future finally arrives?

At times, people asked this directly. When Smalls took the stage alongside legendary labor leader and co-founder of the National Farm Workers Association Dolores Huerta, he asked her about how to care for your mental health in the midst of labor organizing. Huerta recommended reaching out to people who support you and celebrating “a lot with song and with music and with friends, so that it doesn’t get so burdensome that it crushes you.” Philipps asked Paula Ávila-Guillén, a human rights lawyer and activist who’s worked to decriminalize abortion across Latin America, what the U.S. can be doing to fight against the upcoming Supreme Court decision that’s expected to overturn or gut Roe v. Wade. It’s frustrating, Ávila-Guillén said, “when I see what’s about to happen in the United States, and I don’t see people protesting every day.”

When asked offstage about the upcoming five-year anniversary of the “Me Too” movement this fall, its founder Tarana Burke said that it’s imperative to focus on what the movement’s work has made possible, as opposed to specific successes and failures. “I could run you a list of the laws that have been passed and the legislation and who’s gone to jail and who lost their jobs and all the rest of that, but all of that is fleeting,” she told ELLE.com. “For example, Harvey Weinstein got however many years; Bill Cosby got let out of jail. Imagine if that was our gauge. It’d be like watching a tennis match. And our hope would be attached to that. Imagine trying to live like that. Imagine trying to steer a movement like that.” Instead, she said, the conversation should be about how “Me Too” shifted the culture and created space for “an international dialogue we couldn’t have had five-and-a-half years ago.”

That doesn’t mean there isn’t more work to do—there’s a “shit ton,” to use Burke’s words. She is keenly aware that the fire won’t always burn bright. “There’s already a complete drop in interest in sexual violence—look at this fashion show that happened the other day,” she said, presumably in reference to Alexander Wang’s return to the runway in L.A., his first show after being publicly accused of sexual assault. “You can’t get even people to be mad about it. You can’t get people to be shamed about it. And I’m not going to make a fight about it, because that’s not the fight…I care more about the people who came out and courageously spoke out about what he did, what they feel. I don’t want to shame the people who attended that thing, because they have to live with their decisions. But what I thought about really for days and days [is], what are those people who came forward feeling? That’s our fight.”

Of course, the speakers also addressed that original question—about what a future that’s inclusive and equitable and safe and feminist might look like. “I would love to paint a future that has a few more shades in the film space—a few more shades and sizes,” Janicza Bravo, the co-writer and director of Zola, told ELLE.com backstage. “One of the first times I was at Sundance with work of my own, I remember reading this story,” she continued. “There was a director who’d made a small, independent film who was now getting a chance to make a huge movie. Part of the story was that the opportunity he was handed was because he was sitting across the desk from this very established white filmmaker who was like, ‘I just looked at him, and I saw myself.’ I remember reading that and thinking, that’s never going to happen to me. No one’s ever going to sit across from me and see themselves. So how do I get to do that thing? I would love in 10, 15, 30 years to sit across from a young person who looks like me and tell that story: I saw myself, and I was able to make this opportunity for them.”

“While it is so disheartening, I try to recontextualize it as actually just a death rattle in response to the fact that things are radically changing.”

Because even amid the horrors and defeats, the night’s speakers still had hope that this kind of future is possible. More than one person at “22 for ‘22” suggested that perhaps the reason the country feels so fragile right now is because we are nearing the end of a time when exclusionary, bigoted behavior is deemed acceptable. “Sometimes I think about these anti-LGBT legislation attempts as kind of a death rattle,” actor Amandla Stenberg told writer and activist Raquel Willis during the final panel. “It’s more and more apparent that we’re having these critical conversations about gender, about expressing gender beyond the traditional binary that we’ve internalized. So while it is so disheartening, I try to recontextualize it as actually just a death rattle in response to the fact that things are radically changing.”

Backstage, Burke told ELLE.com the same: “I really think the reason it feels so bad right now is because these horrible people, they see the end. They’ve seen the end for a long time, so they’ve been gearing up. They’re fighting for their lives, because it’s the last little bit of their life left. Their way of life is not sustainable, and this next generation just won’t stand for it.”

She continued: “I just don’t feel very worried about this next group. Because, my God, they’re so ready.”