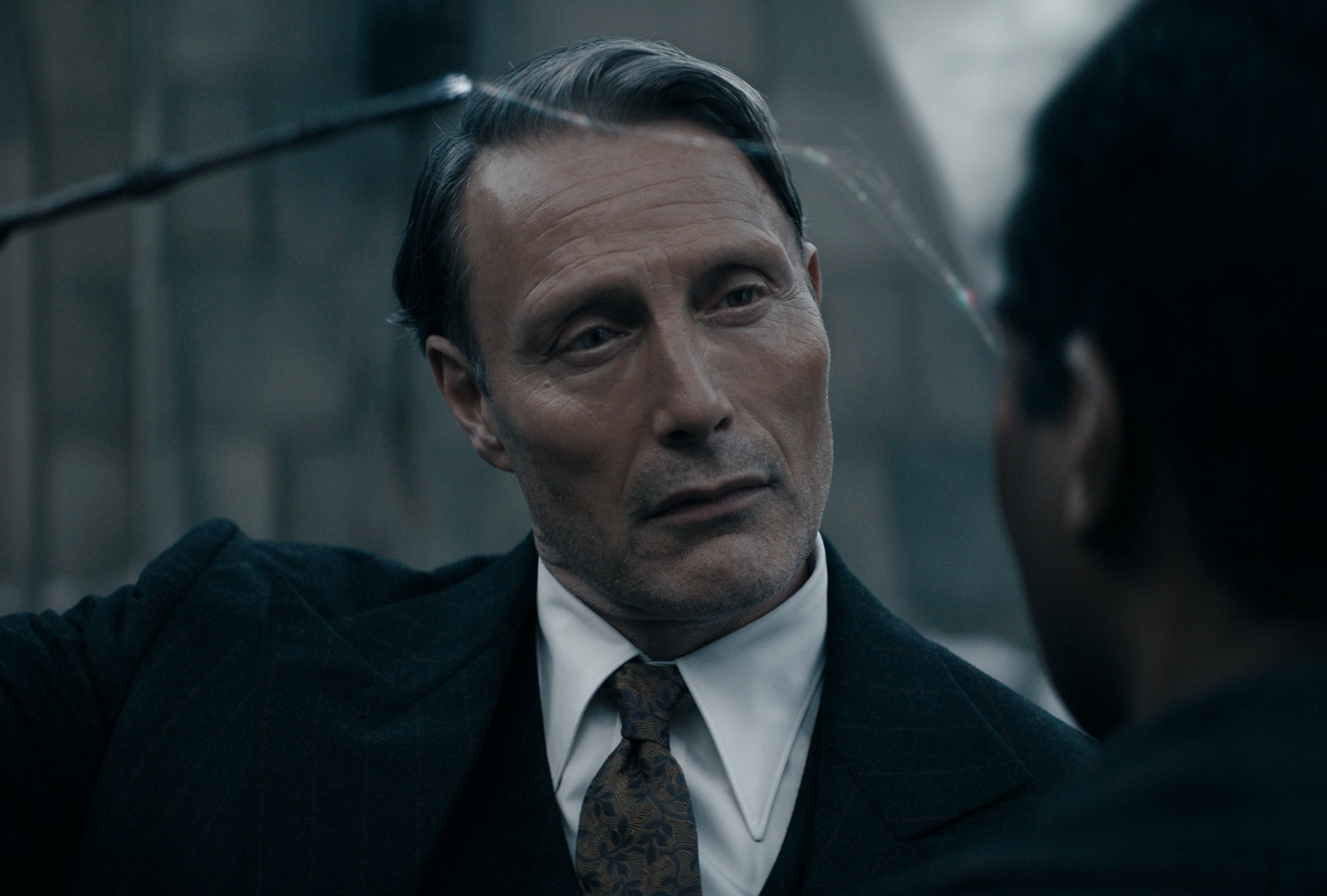 Way back in my 20s, my friends and I played a game that involved casting actors as certain Guy at the Party types. This fantasy’s purpose wasn’t to make these fetes more desirable by studding them with stars, but to accurately suss out the source of a performer’s charisma.

Straightforward troublemakers like Johnny Depp are easy to profile. He’s the guy whose arrival makes everyone softly groan, and he revels in that. To his credit, he brought a bottle to share, but it’s the cheapest rum he could find; also, you know he’s going through your cabinets and closets to find where you hid the good stuff, with which he will then disappear along with your favorite shoes . . . just because.

He loves living up to his self-image as a “scamp,” which is much nicer than the names other people call him – like, say, The Sun, which described Depp as a “wife beater.” Depp sued the newspaper for libel and lost, leading Warner Brothers to oust him from the “Fantastic Beasts” franchise.

Then the studio called in a more refined option to replace Depp as Gellert Grindelwald in “Fantastic Beasts: The Secrets of Dumbledore”: Mads Mikkelsen.

No actor is consistent in their film choices or possesses a persona appealing enough to lure me to a theater simply because their name is on the marquee. But if I had to choose such a performer, Mikkelsen might be that guy. My husband and I have casually seen more of his movies than we’d realized simply because we like him. You probably have too. He’s the modern jazz equivalent of Hollywood actors: a vision of silver-haired refinement and maturity, with a face that has earned its lines, yet rarely seems haggard. 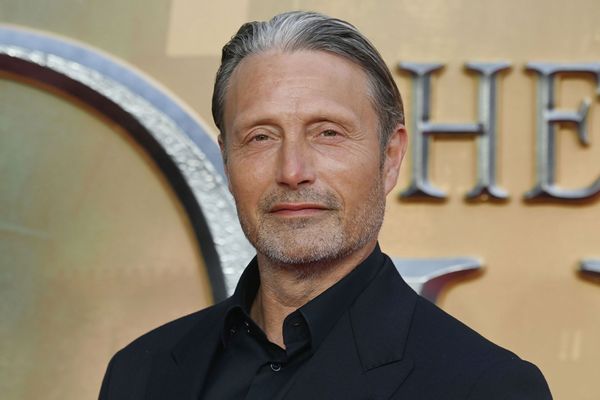 My husband and I have casually seen more of his movies than we’d realized simply because we like him.

“Fantastic Beasts” is a franchise I’ve been fine with experiencing on cable, mainly because it best answered the question, “What else is on?” But the thought of seeing the great Dane take on Grindelwald, playing him as the scorned, vindictive ex-lover to Jude Law’s Albus Dumbledore, is tempting enough to consider breaking that streak.

That is Mikkelsen’s superpower: his tractor beam magnetism. In fantasy party terms, he’s Guy Who Quietly Lurks in Your Kitchen. His type chooses to show up because he genuinely likes people. Still, he’d rather not mingle. He know you’ll come to him. People like that can be inscrutable, intimidating. But if you engage him in light conversation, you might find out that he’s merely afflicted with a handsome version of “resting bitch face.”

A recent GQ article backs up this characterization: “I was always one of those actors who instead of going to the back row, with my voice or my energy, I would try to invite them up to me, make them curious: ‘Come up to me, and see what I have to say,'” he revealed.

He probably enjoys a hard cheese.

In the same article, he deemed method acting to be “bulls**t,” and openly fantasized about driving Daniel Day-Lewis nuts by breaking down whatever part he’d slipped inside of. “‘I’m having a cigarette? This is from 2020, it’s not from 1870 – can you live with it?’ It’s just pretentious!”

Anyway, now that we’ve spoken to him, maybe we feel much better about him lingering near your kitchen knives; he probably enjoys a hard cheese, and the implement you’ve provided on your charcuterie board isn’t going to cut it. Then again, maybe he’s judging the fact that you bought your knives at Target. He’s too polite confirm that, but can’t you see it in his eyes?

Onscreen, Mikkelsen favors silence and unknowability the way other artists work with clay or oil paint, using it to contour his speech with negative space or highlight its sharpness. His means of combining a slightly smoked delivery with quietude creates an irresistible attraction, the basis his chilly, polished portrayal of Hannibal Lecter. 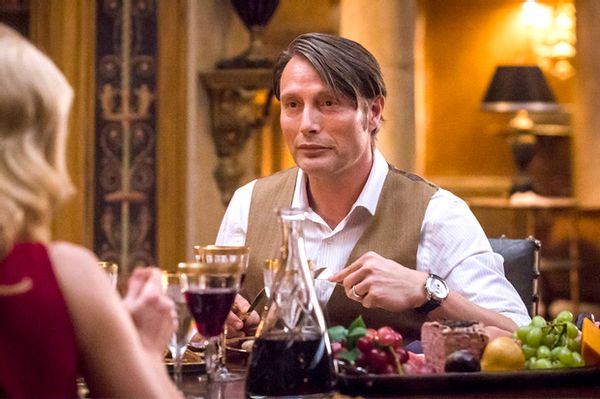 But he brings that mystery to all the major roles he’s played in the top film franchises, starting with 2006’s “Casino Royale,” where we met him as Le Chiffre, the elegant villain who wept tears of blood.

Mikkelsen gets a lot of mileage over people puzzling over him.

In 2016 he ticked off parts in the Marvel Universe, as the ruthless sorcerer in “Doctor Strange,” and as Galen Erso, the tragic scientist forced to design the Death Star in “Rogue One.” Homicidal fiend in on galaxy and distant, regret-filled father in another. Just for kicks – the year before he signed up to play Rihanna’s titular “bitch” in her video for “Bitch Better Have My Money,” which ends with him duct taped to a chair and on the verge of being tortured by her.

“Who is this guy?” Mikkelsen gets a lot of mileage over people puzzling over him, the way we would at a houseguest choosing to socialize only when it becomes necessary. He’s quiet, and may not be much of a small talker. Still if you ask, he’ll tell you he used to study dance, which explains why his acting style favors showing more than speaking.

And that stillness makes him bizarrely sexy, even in doleful parts like his history teacher Martin in 2020’s “Another Round,” a man who regains his passion by remaining ever-so-slightly inebriated throughout the day. The Oscar winner for Best International Feature Film is being remade for American moviegoers with Leonardo DiCaprio, but please. Leo doesn’t have the soul to match what Mads did for that part; imagine him pulling off a Sazerac-fueled drunk-guy groove to The Meters’ “Cissy Strut.” Impossible.

That stillness makes him bizarrely sexy.

Mikkelsen can, because he wears an assurance that telegraphs his contentedness with filling space without sucking the air out of the room. That could win back anyone who wasn’t a fan of his predecessor’s carnival sideshow version of Grindelwald and prefers their monsters to resemble the ones in the real world. In that vein, Mikkelsen has declined to definitively weigh in on J.K. Rowling‘s virulent transphobia, which is . . . a choice.

He told GQ that he wasn’t familiar with her views, declaring, “I have a habit of not commenting on things that I don’t know anything about, and I actually think that that would suit the entire world.” Disappointing, yes, and a convenient stance for a man who sells himself as not quite being anything aside from a devoted husband and father who reportedly downplays his outsized fame in his home country, where he has George Clooney levels of pull.

Without having seen “Fantastic Beasts” I’d wager it’s superior to past movies simply because Mikkelsen showed up.

And we probably shouldn’t expect much more from a guy we’d envision subtlety refilling the ice buckets and empty chip bowls, but who will never let you know whether he hates the red you’re serving to everyone.

It’s not as if you can do anything about it in this dream scenario; Depp already ghosted and took the premium spirits. Then again, Mikkelsen’s relative sobriety is precisely what the wizardly world may need. It’s usually enough to make mediocre flicks palatable, and passable fancies outright enjoyable. Without having seen “Fantastic Beasts” I’d wager it’s superior to past movies simply because Mikkelsen showed up. He’s a reliably entertaining companion because he’s mastered the magic art of saying less.

“Fantastic Beasts: The Secrets of Dumbledore” is currently playing in theaters. This time we might even watch it there. 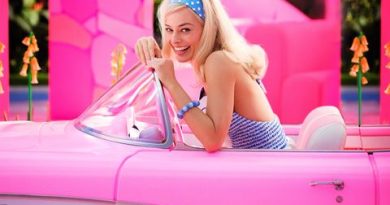 Greta Gerwig’s Barbie Live-Action Movie: Everything We Know So Far 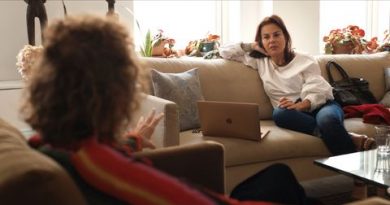 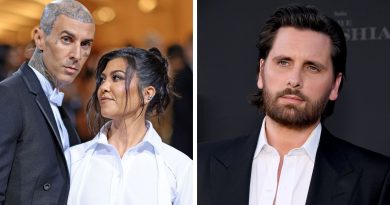 Forget eloquence what metrics did you guys use to actually rate Peter Obi ahead of Asiwaju Bola Tinubu?-Bola Swaga

Because Emilokan is too big to tell Nigerians 🇳🇬 why we should hire him to do the job. Tell him to attend any of the town hall meetings or be interview by Channels or Arise TV just like the rest of the candidate did.. A big red flag...

What did you even know about BAT? Nor be eloquent u got na the system that they are using to put you and your children into an abject poverty by selling your votes for immediate wants even when you know they can't do the work. I pity for your children. Ozuor

Una no dey get fine face