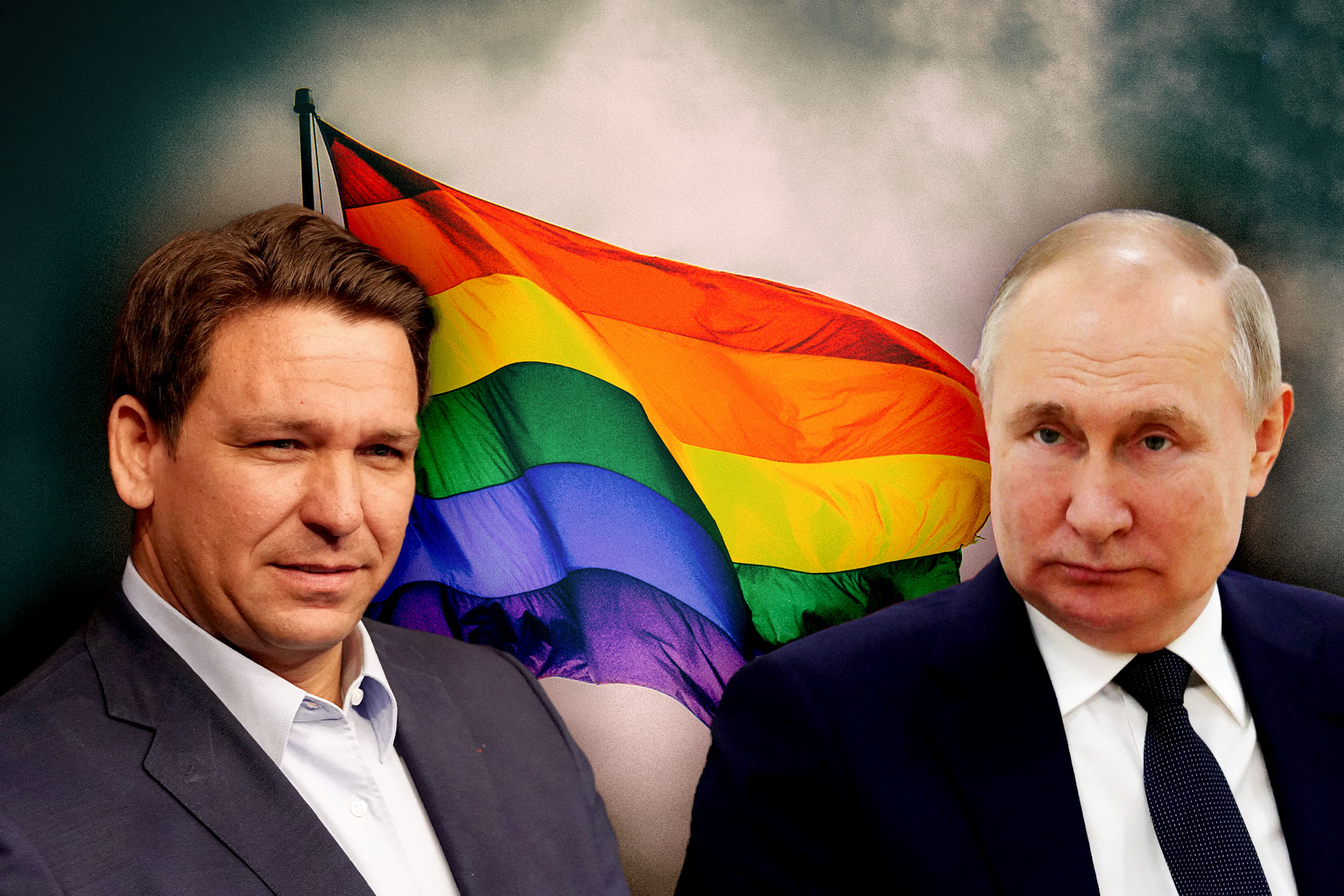 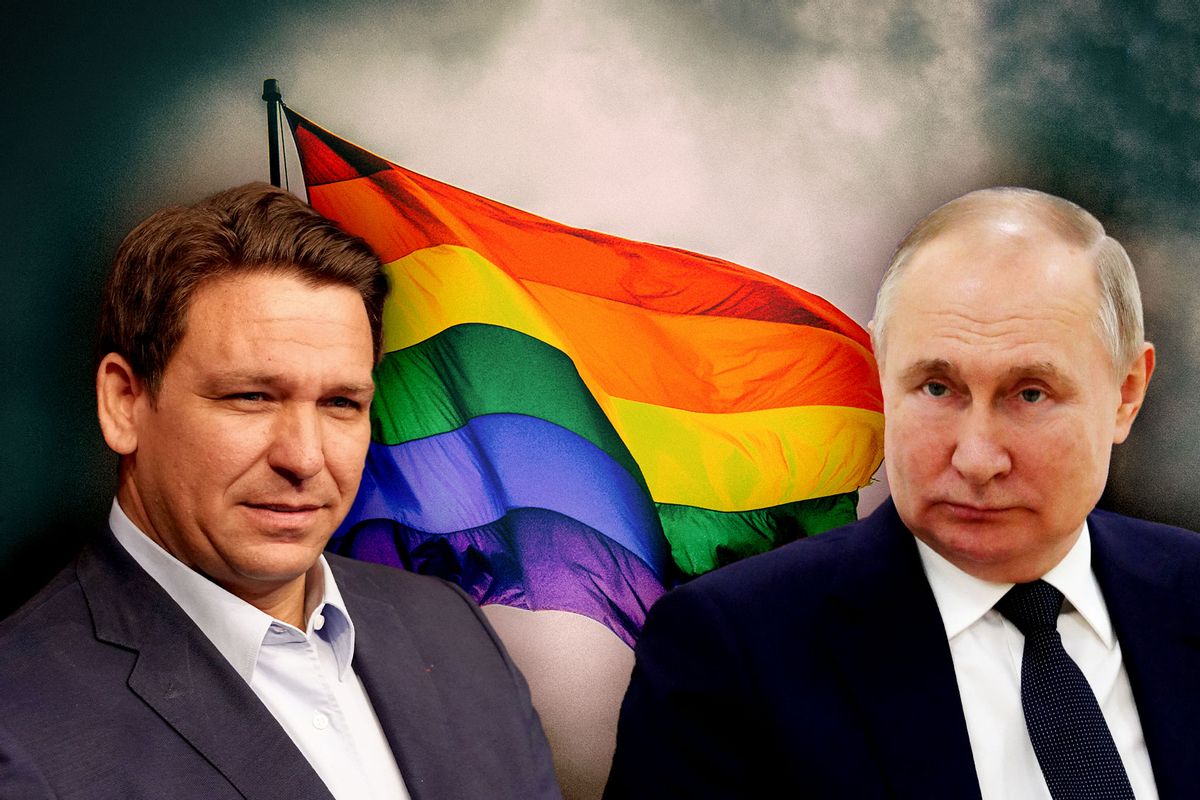 The conservative government was alarmed at the rise in the numbers of young people espousing LGBTQ identities. So leaders decided it was time for a crackdown. Claiming that it was all about “protecting” the children from supposedly sexually predatory adults, a “don’t say gay” law was passed that barred “promoting non-traditional relations to minors.” Defenders of the law insisted that LGBTQ people were “not being discriminated against in any way.” However, as human rights advocates pointed out, the law was so vaguely worded as to bar any open expression of queer or trans identities. Simply being out of the closet became reason enough to be accused of “gay propaganda,” since, after all, one could read that as a signal to minors that being gay is okay.

This is Florida now— but it was Russia first.

Florida in the year 2022 is where Republican Gov. Ron DeSantis signed a law that threatens financial ruin for any speech that could be construed as “instructing” kids about LGBTQ identities. But nine years ago, the same controversy was centered in Russia, where President Vladimir Putin signed a federal “don’t say gay” law. The only difference is Putin could apply it to the whole nation, whereas DeSantis can only exert power on public schools in his state. In both cases, however, the same baseless justification was used: kids were being “groomed” by adults with nefarious intent so speech needed to be restricted to protect kids. In both cases, however, the actual reason for the law is to force people to live in the closet and punish anyone speaking out on behalf of equal rights.

Though it’s not being talked about much, if at all, in the mainstream media, the 2013 ban on “gay propaganda” in Russia and the current Florida law barring any “instruction” on “sexual orientation or gender identity” are incredibly close to each other. So close, in fact, that’s it’s impossible to imagine that DeSantis and his allies didn’t draw inspiration from the same Russian dictator who is currently waging a genocidal war on Ukraine.

As NPR reports, “don’t say gay” bills are spreading as Republicans in over a dozen states have introduced copycat legislation meant to ban books and shove teachers and students back into the closet. There’s good reason to think Putin inspired this current raft of “don’t say gay” bills beyond just the similarity in how the bills are worded and the same “groomer” lies being used as justification. The American religious right has long and deep ties to Putin and the authoritarian government in Russia. Indeed, they’ve spent years specifically advocating for and supporting the “don’t say gay” law in Russia.

It’s impossible to imagine that DeSantis and his allies didn’t draw inspiration from the same Russian dictator who is currently waging a genocidal war on Ukraine.

In other words, the religious right has long been aware of Putin’s “don’t say gay” law and the lies his government used to defend it. It’s not a coincidence that the same ideas and rhetoric are being deployed by Republicans here. Indeed, at the same time Russia passed its “don’t say gay” law in 2013, they also passed an “anti-blasphemy” law that recommended jail sentences up to three years for “offending religious feelings.” If that sounds familiar, it should. The same kind of language is being used in the Republican war on what they call “critical race theory.” For instance, the “Stop WOKE” bill DeSantis is also pushing bans any materials that discuss racism that white people claim causes them “discomfort, guilt, anguish, or any other form of psychological distress.” The anti-“critical race theory” movement in the U.S. has been used to ban books teaching that slavery or the civil rights movement happened, just as Russia’s “anti-blasphemy” law is used to punish any criticism of the Christian right.

Despite Putin’s claims to the contrary, human rights advocates were right about the impact of his “don’t say gay” law: The Russian “don’t say gay” law has been used as an all-purpose excuse to crack down on LGBTQ rights, all under bad faith claims of “protecting” children. Public materials that portray same-sex couples have been censored. Gay rights activists have been arrested. People were fired for being out of the closet. Pride parades were banned. Right now, the Russian government is trying to shut down one of the nation’s biggest LGBTQ rights groups. Ukrainian citizens worry that the campaign of terror against queer people will be extended to their country if Russia succeeds in its invasion. WNBA star Brittney Griner is being held hostage in Russia right now, and while the official excuse is drug-related, gay rights activists are accusing the government of holding her in no small part because she’s an out lesbian. And while the European Court of Human Rights ruled against the “don’t say gay” law in 2017, unsurprisingly that’s done little to stop the human rights abuses in Russia.

Due to Russia’s horrific invasion of Ukraine and the seemingly unending war crimes being committed there, most Republicans have become shy about the pro-Putin sentiment that’s been churning through their party for years and was only amplified by Donald Trump’s robust admiration for the Russian dictator. But it is hard to ignore that this explosion of “don’t say gay” and “critical race theory” bills look like they were directly inspired by Russia’s “gay propaganda” and “anti-blasphemy” laws. Even the justifications — wild accusations of “grooming” and whining about the dominant class’s hurt feelings — sound identical. The American right’s affinity for Putin’s Russia is still going strong, even if some of them are being a little quieter about it these days.

RELATED: Don’t be fooled: The GOP love affair with Putin is worse than it looks 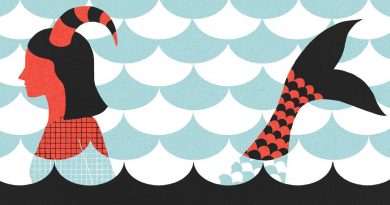 Jennifer Coolidge is having a moment, and we are here for it. Thanks in part to her brilliance as Tanya