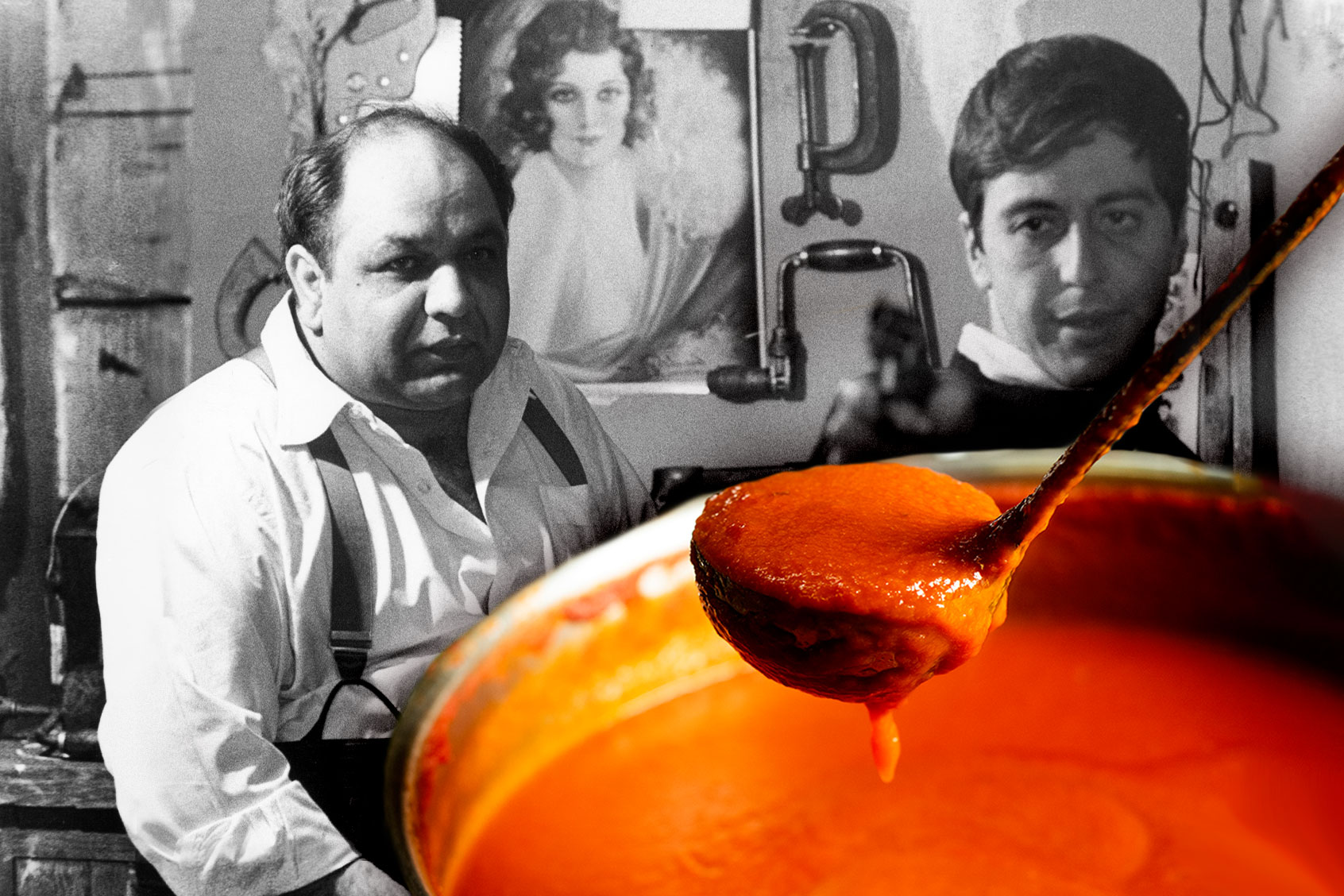 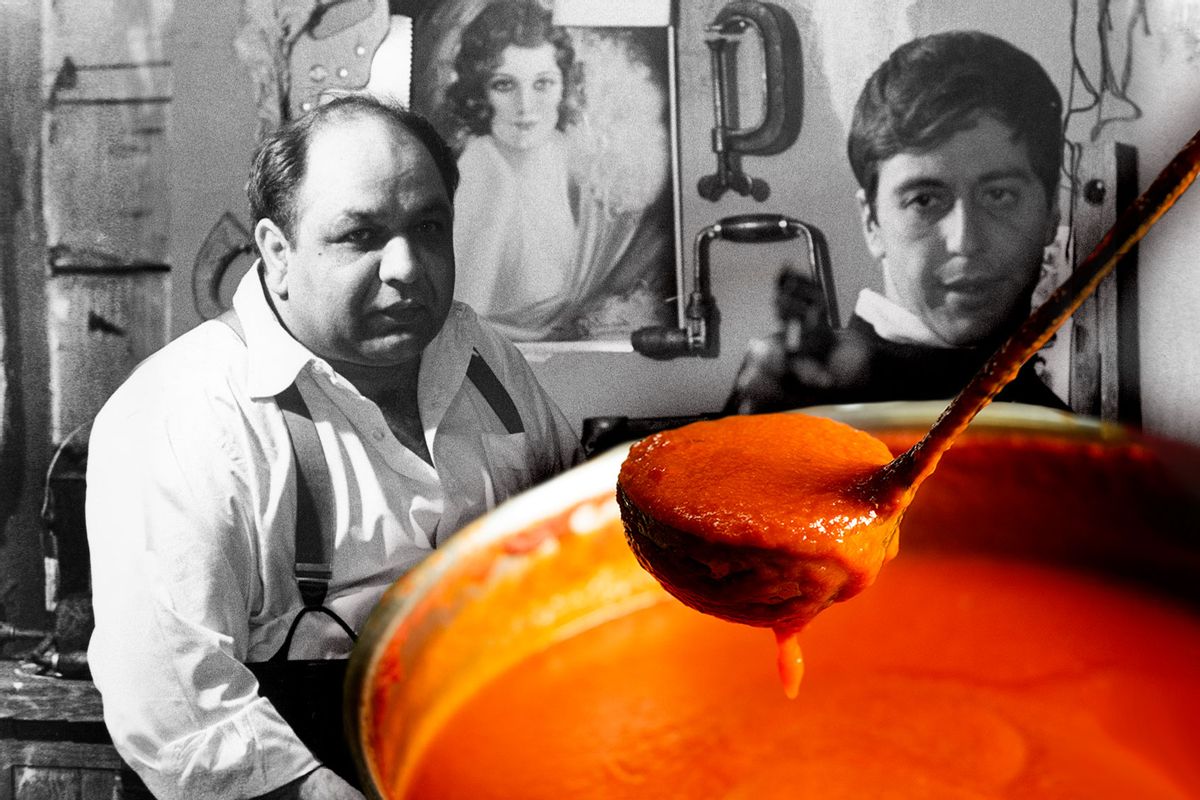 This revelation comes courtesy of a mid-progress taste check on a marinara sauce made with homegrown tomatoes. It’s important for you to know about the tomatoes’ origins because it explains my surprise at discovering that the sauce was missing its typical sweetness, the main reason to grow your own tomatoes in the first place.

Unable to figure out how to amend this problem, my husband asked, “Did you add sugar? It’s supposed to have sugar.” I thought he was joking but, no, he was dead serious.

Then he cited his source: “That’s how Clemenza says to do it in ‘The Godfather.’“

“Did you add sugar? That’s how Clemenza says to do it in ‘The Godfather.'”

Fifty years after “The Godfather” debuted in theaters, it remains a masterpiece of storytelling and cinematic technique and a trove of career-making performances. So influential is Francis Ford Coppola’s telling of Michael Corleone’s mob boss origin story that the origin story of the film is becoming its own series called “The Offer,” premiering in late April on Paramount+. The movie has many lessons to teach the steep costs of attaining and retaining power, what a man gains and loses from pledging his loyalty to his family’s greatness above all else.

RELATED: We snagged the recipe for Carmine’s hearty Italian meatballs

However, as my husband showed me, even a person who doesn’t live and die by Coppola’s masterpiece may somehow have learned how to make Peter Clemenza’s sauce.

If you don’t, just watch this scene for some basic instructions.

Peter “Leave the gun. Take the cannoli” Clemenza (played by Richard S. Castellano) was a loyal killer for the Corleone family, but he also won everyone’s love the old-fashioned way: through their stomachs. To Michael Corleone, he was a trusted adviser and full of wisdom, but perhaps nothing as useful as how to cook for a (grouchy, fully armed) crowd.

You’ll notice the man was not specific about measurements, which is why so many versions of this recipe are floating around out there. This one tweaks a classic Sicilian-style version shared with me many years ago by a friend’s lovely mother who took pity on on one of my first attempts to make sauce using fresh garden tomatoes.

“You never know, you might have to cook for 20 guys someday.”

Clemenza’s trick may be sugar – and even though I’ve been using the same sweetener-free marinara recipe for many years, he was right about that boost – but the greater accomplishment of that scene is to plant a recipe into the brains of millions of folks without them knowing it. Even if you’re a person like my spouse who doesn’t cook that often, if you can remember the outline of what he says in that scene, then you know how to make a very basic gravy.

This scene is useful for everyone, as Clemenza tells Michael,  because “You never know, you might have to cook for 20 guys someday.”

Here’s our version, along with a line-by-line breakdown. You can use this sauce on spaghetti or other pastas. Without meatballs, it’s a great sauce to use in lasagna. But if have a terrific meatball hook-up, why deny yourself that pleasure?

“You see, you start out with a little bit of oil. Then you fry some garlic.”

Pretty self-explanatory save for a few details, including the amount of garlic to use. I love garlic, so I never use less than six cloves. Mince or finely chop the garlic and saute it until golden. Watch it closely to make sure the garlic doesn’t burn; the difference between an aromatic, crisp golden hue and a pot-ruining charcoal is a matter of breaths.

“Then you throw in some tomatoes, tomato paste, you fry it; you make sure it doesn’t stick. You get it to a boil . . .”

Clemenza loves to use the word “fry.”

Clemenza loves to use the word “fry,” but we get his point. The acid in the tomato juice deglazes the pan, which is why I like whole canned tomatoes; it approximates the texture of my garden crop. In the movie scene he uses two large cans of tomatoes and two smaller cans of tomato paste. Depending on how much meat you use, how many people you’re feeding and how wet of a sauce you prefer, you might want a third can handy. (If you have access to fresh, homegrown tomatoes, you can simply remove the skins from them by submerging them in boiling hot water until you see them split, then rubbing them off with your fingers. Slice and remove the seeds if you want; I don’t. )
Leave the lid off, bring it to a simmer and reduce the sauce to your preferred thickness.

Clemenza probably isn’t making his own meatballs – not because he couldn’t, but you know he knows a guy, and who has the time? This recipe is about keeping it easy. As for the sausage and meatballs, cook them separately so you can “shove” them in closer to the finish. As an option, vegetarians, you can leave out the meat or use whatever protein substitute you’d like. Just be sure to amp up your seasonings.)

Once you’ve mixed in the sausages and the meatballs and let all their lovely flavorings and fat incorporate into the sauce, add the wine. Give that a few moments to insinuate its flavor into the mix, and then add your sweetener.

Clemenza uses sugar; I find that a squeeze of honey in my sauce both balances out the acidity and adds whatever “oomph” is missing from my tomatoes. Canned ones will almost certainly need that boost, but if you’re lucky enough to grow your own, or have access to some great heirlooms when they’re in season, you might not need as much.

One more lesson from that scene: Before you eat this with people you care about, let them know you love them “with all-a your heart.” It makes the meal that much sweeter. Everything We Know About Netflix’s Addams Family Series, Wednesday

America needs its own Jubilee: We are a nation in profound crisis