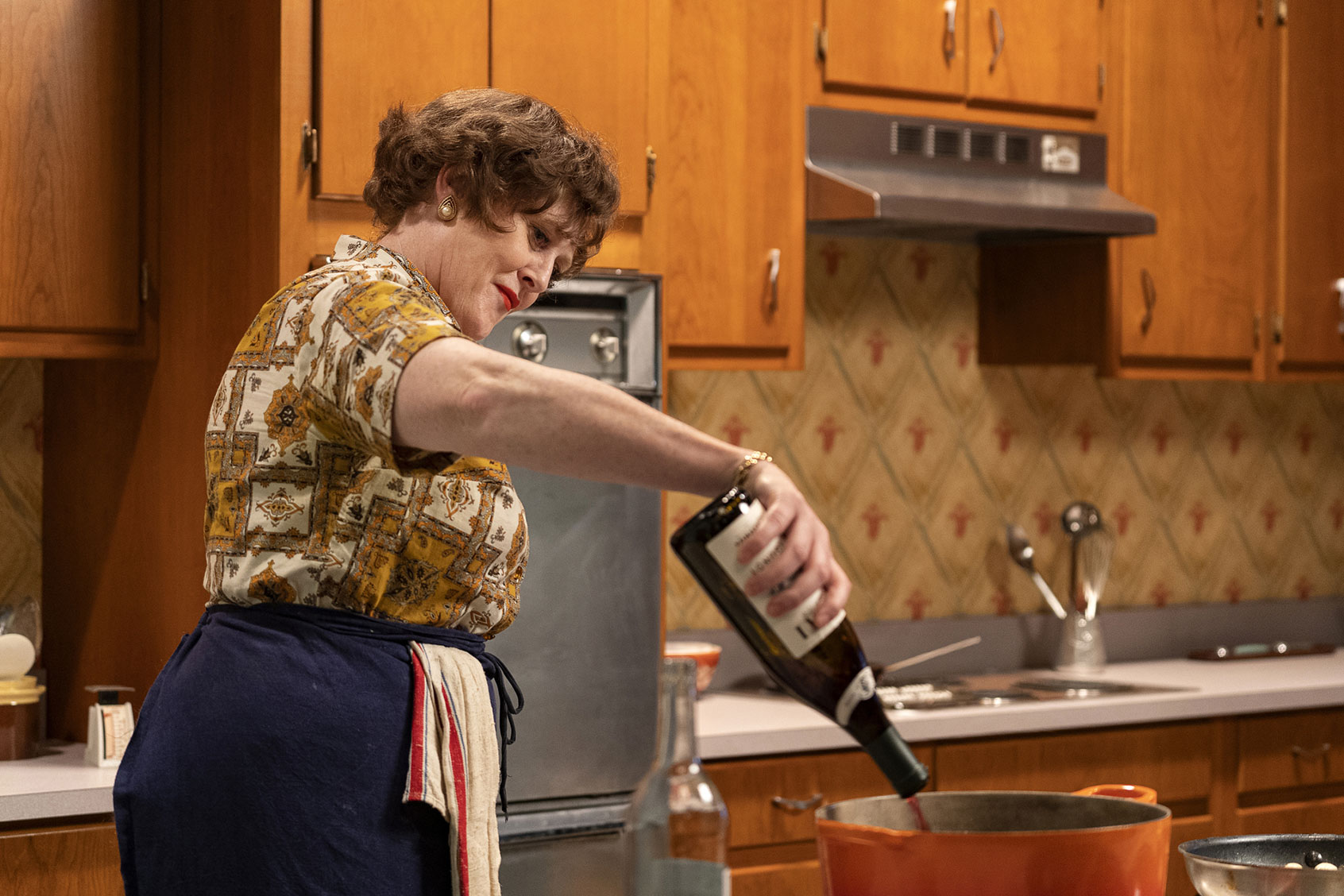 It was the Queen of Sheba’s cameo that got me, unexpectedly appearing more than midway through HBO Max’s “Julia” premiere. In this telling, Julia Child (Sarah Lancashire) has an uphill climb to win over dismissive male producers at WGBH, Boston’s public television station, eggheads who pooh-pooh the intellectual value of a show that demystifies the art of French cooking.

They lacked the vision to see that Child was on to something that would transform the way Americans think about food. The scene in question shows her determination to get them on her page: Julia gaily waltzes into the offices of WGBH, cake plate in hand and ready to negotiate with a side of sugar. Once inside their offices she unveils her small masterpiece, explaining to her greatest fan and future producer Alice Naman (Brittany Radford) that its simplicity is one of the reasons she adores it. That’s when my eyes welled up.

The recipe’s simplicity also is why I could make that cake in grade school, having copied down the ingredients from a recording of “The French Chef,” the very show she’s pitching. In the same way Lancashire’s Julia arms herself with an extra helping of chocolaty persuasion, I made my share of Reine de Sabas for school occasions and church functions, for gifts to neighbors and friends, as general a token of, as Julia might have put it, bonhomie. 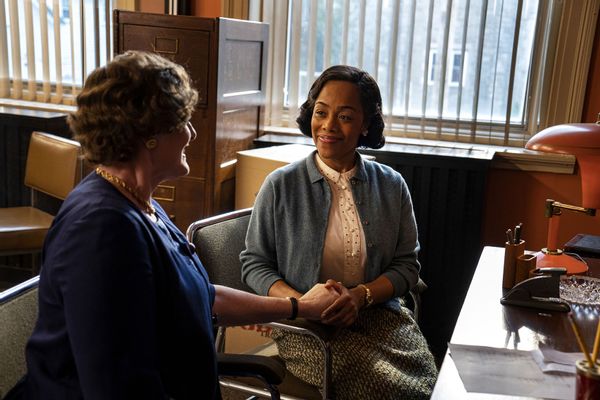 I was programmed to embrace her from early childhood

because of the place she holds in our memory, whether collective or individual. Reruns of “The French Chef” aired after my local public TV station’s children’s programming block ended, making it very likely that I was programmed to embrace her from early childhood.

Women who held a certain image of her from way back then may see her in another light now. There is no way I would have fully appreciated the sundry social, gender and political subtexts “Julia” explores even a decade ago, for the simple reason of being closer to the age she was when her popularity ascended.

RELATED: “The Julia Child Challenge” and the mystique of one of America’s most iconic chefs

Times have changed since Child’s era, but only by increments, as the show demonstrates. Alice, Julia and her best friend Avis (Bebe Neuwirth) and other women are constantly navigating the fragile male egos in their orbit, whether in the form of WGBH’s sexist eggheads or Julia’s own husband Paul, played by David Hyde Pierce. And one of the main ways Julia succeeds is by acknowledging their misogyny and turning it back on them.

They try to write her off because she isn’t conventionally telegenic, but that’s disproven when a guest appearance on a dull as dust literary show results in the station getting more positive letters than ever. She pitches a TV pilot anyway; they continue to reject it out of snobbery. But she is insistent.

“One of the advantages of looking like me is that you learn at a young age not to take no for an answer,” she coos. Still, station producer Russ Morash (Fran Kranz) isn’t convinced. “No offense, but it this what we really think public television should be doing?” he asks the men in the room, ignoring Alice and Julia.

In response one of them eye-humps the Queen of Sheba. “Cut me a slice.”

Through “Julia,” showrunner Chris Keyser digs into the humanity underneath the ideal, giving us another ambitious woman that is in some respects the forerunner of Deborah Vance, Jean Smart’s unsinkable comedian at the heart of “Hacks.” Lancashire’s Julia is a stately woman who curses and bawdily describes chicken parts, and she knows she can get away with that because she has no aspirations to be a sex symbol.

And “Julia” lives up to the popular image of Child as a bubbly, matronly professor of joie de vivre while also reminding us that she became an icon through her own effort (and financial investment, as the writers depict), and despite the obstacles placed in her path. She’s also revealed to have few hang-ups, some of which are instilled in her psyche by men like her father (James Cromwell), who grudgingly puts up with his daughter’s demonstrative self-reliance as he looks down on Paul.

This is another facet of the show’s effort to grapple with the way successful women must constantly battle sexism and patriarchal pushback. Yet another surfaces in the form of Child’s discomfort with homosexuality despite her devoted friendship with James Beard (Christian Clemenson). Then again, a wild day out they share has the dual role of pointing out Child’s privilege as a wealthy white woman arriving on the national stage in time of societal tumult. “America can’t love a fat old fairy like me,” Beard tells Julia, adding with genuinely affection, “You, on the other hand, make people very happy, including me.”

Lancashire, primarily known to American viewers from “Last Tango in Halifax” and “Happy Valley,” presents Julia as a combination of savory and sweet, with a dash of bitter melancholy. She is unafraid to bare Julia’s calluses and cracks, making her more human and whole in the process.

Like any story sauced with nostalgia, “Julia” folds in passages that are expressly engineered to achieve maximum heartstring-tugging throughout its first season. Some lurk within fictional recreations of scenes based upon Julia Child’s life and legend. Other tearjerker moments are products of artistic license, as one is apt to liberally employ in a show like this.

Mainly this plays out within the prevailing mythology surrounding Julia’s marriage. The common story is that her husband Paul supported her unconditionally in her career. Maybe that was entirely true, which “Julia” acknowledges, in its way, by consistently showing how loving they are to one another. But it also makes a multicourse meal out of Paul’s petulance at Julia’s successes, giving Pierce an excuse to pull shades of Niles Crane out of deep storage, setting him into full French farce mode. 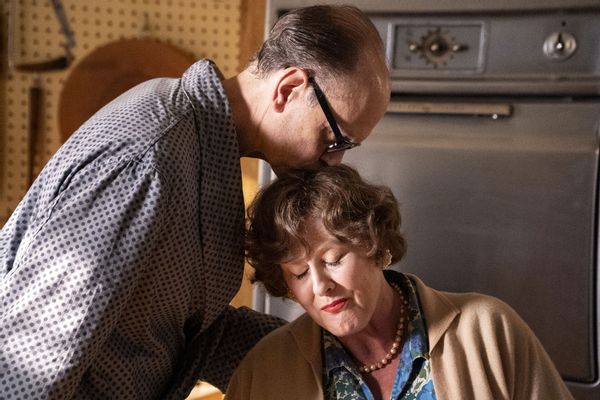 Julia (Seacia Pavao / HBO Max)Still, Paul’s conditional support is one of the ways “Julia” subtly critiques the pursuit of fame, writing love letters to it in some scenes and quietly resenting it in a mixed bag in others. “It’s lovely,” Julia says of her sudden success, “until I really think about it. And then it’s less lovely.”

Julia Child was never enough in some way for a lot of people, everywhere

Where the show is most poignant is in the ways it reminds worshipful stans that in her time Julia Child was never enough in some way for a lot of people, everywhere.  Even when “The French Chef” becomes a breakout hit and brings revenue in to WGBH, Russ resents being associated with the show.

When someone cuts her down to her face, the shock, hurt and embarrassment blazing across Lancashire’s expression is absolutely devastating. This happens enough times that when an episode ends with a tear-inducing surprise courtesy of another comforting legend, you might feel your stomach untwist.

“Julia” isn’t without its flaws, and if you’ve passed your saturation threshold with all things Julia Child this show may feel far less essential than others.  Episodes emphasize a brightness and zest to overpower the shades of blue written into Lancashire’s character, an approach that also sanitizes the battles women like Bradford’s Alice Naman had to fight.

That character is based in part on WGBH producer Ruth Lockwood, who was responsible for bringing a number of series like “The French Chef” to the air; she’s also depicted by a Black woman who is confident in her abilities and survives through forbearance and a high tolerance for frustration. While “Julia” doesn’t hesitate to depict the sexism Alice faces, it balks at directly engaging with the prevalent racism in 1960s Boston. Instead we’re meant to get what’s implied when she’s ignored in stores or meets other Black people at all diners where everyone else looks like them, which is accurate to the era yet avoidant in terms of truly showing that part of its reality.

One defense of that, I suppose, is that viciousness would sink the souffle – and “Julia” is nothing if not a spirited balance of substance and airiness devoted to deflating snobbery and exclusion. Child’s critics might scoff at this, pointing out all the groundbreaking chefs who came before and after her only to exist her shadow. (For a while every up-and-coming chef was the “Julia Child” of their culinary specialty.)

She taught Americans how to taste life

And yet, “Julia” is fulfilling for the same reason that Julia Child was and continues to be. As her husband Paul puts it, she taught Americans how to taste life. By showing us how to cook well, Child lent nobility to our daily lives and a renewed appreciation of the necessary task of making dinner.  “The French Chef” exposed Americans to the joy of being in her company for half an hour every week. “Julia” delectably continues that tradition.

“Julia” debuts with three episodes Thursday, March 31 on HBO Max, and will release episodes weekly. Watch a trailer for it below, via YouTube.

Blake Masters, a mini Trump, has a plan to privatize (almost) everything everywhere

How Broadway’s Penny Lane Got Her Look