Minister of State for Labour and Employment, Festus Keyamo, has been omitted from the list of consensus candidates from the South-South zone ahead of the All Progressives Congress delegates meeting.

Keyamo was not among top government officials and politicians from the zone that appended their signatures to the list.

Stella Okotete, representative of women in the Caretaker Extraordinary Committee; representative of the South-South in the CECPC, David Lyon; Senator Ita Enaga, Senator Magnus Abe, Victor Giadom and Deputy Senate President, Ovie Omo-Agege, were present at the meeting where the decision was made.

However, all the six states in the region were allocated at least an office as shown on the list.

Top on the list of beneficiaries is former Deputy National Secretary of the party, Giadom, who is returning to the party as National Vice Chairman (South-South) and a member of the NWC.

While Governor Ayade picked Edu (Cross River) for the National Women Leader, Ameachi was said to have picked Giadom (Rivers State) for the position of National Vice Chairman.

Omo-Agege was also said to have picked Morka (Delta State) for the National Publicity Secretary position. 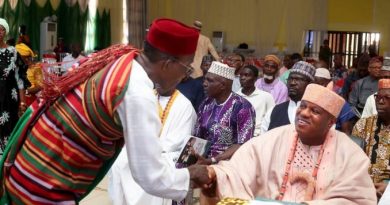