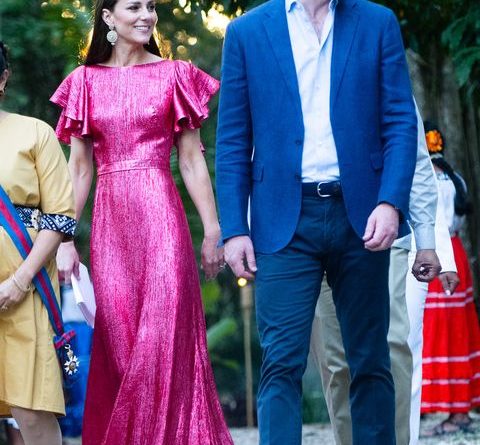 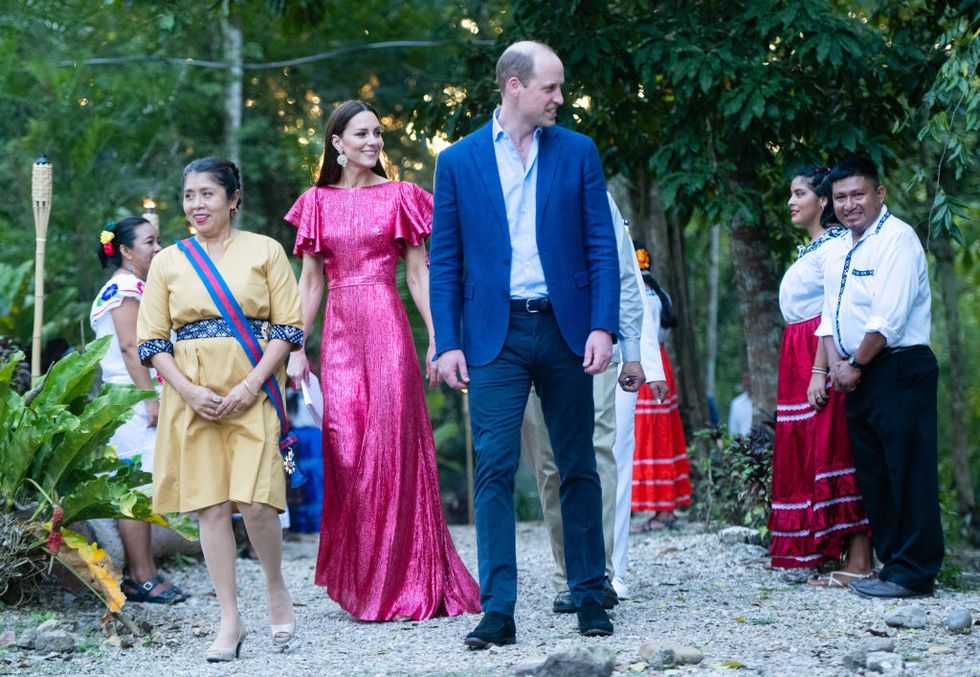 Glamour was the dress code for the Duke and Duchess of Cambridge’s final night in Belize.

Stepping away from her preferred royal blowout, Kate—who is traveling with hairstylist Amanda Cook Tucker—went for a sleek middle part and accessorized her look with Onitaa earrings, a locally sourced Mayan design clutch, and silver Jimmy Choo heels.

The event was held at Cahal Pech, at the base of Belize’s Mayan ruins. The couple were greeted by Governor General of Belize Froyla Tzalam and Prime Minister Johnny Briceño, and joined other guests—including politicians and community leaders—to celebrate the queen’s Platinum Jubilee with a night of Belizean culture.

In a speech, the Duke of Cambridge spoke of his grandmother’s 70-year reign. “I am honored to convey the very warmest wishes from my grandmother, the queen of Belize, on the occasion of her Platinum Jubilee,” he said. “She always speaks so fondly of her visits to Belize, which of course included a memorable stop here at Cahal Pech in 1994.”

He added, “Yesterday we also had a taste of Belize’s wonderful cultural diversity—from Mayan chocolate to Garifuna drumming. And yes, you even got us dancing! Belize may be small, but your rich blend of ethnic groups contributes to the harmonious tapestry of life.”

The duke also revealed that he and Kate were keen to bring their children, Prince George, Princess Charlotte, and Prince Louis, to the Central American country. “We hope to return again soon and to show our children this wonderful country,” he said. “They are rather jealous that they are not here with us now!”

Earlier in the day, March 21, the royal pair visited the ancient Mayan ruins of the Caracol archeological site in Belize’s Chiquibul Forest, where they learned about the history and climbed up the famous 141-foot Caana (“sky palace”).

They dressed appropriately, in casual hiking clothes and Ray-Bans, with Kate tucking a white John Lewis T-shirt into a pair of khaki-green G-Star RAW cargo pants and sporting white Superga sneakers. As the Cambridges’ guide described how the Mayan civilization built the temple palace 3,000 years ago, Kate couldn’t hold back her amazement. “Wow,” she exclaimed as they took in the views from the top.

“These sites are a testament to Belize’s long and proud history and culture,” William told guests in the evening. “And climbing up all those steps is very good exercise!”

Today, the couple are flying to Jamaica for two days, where a protest calling out the royal family’s colonial ties and accusing them of perpetuating slavery will take place just 10 miles away from their arrival point in Kingston. Arranged by a human rights coalition of Jamaican activists and equalities organizations, the demonstration is asking for the British monarchy to apologize for their past and pay for slavery reparations.

Kensington Palace has yet to comment on the situation.

The true story behind the Midge Maisel-Sophie Lennon rivalry