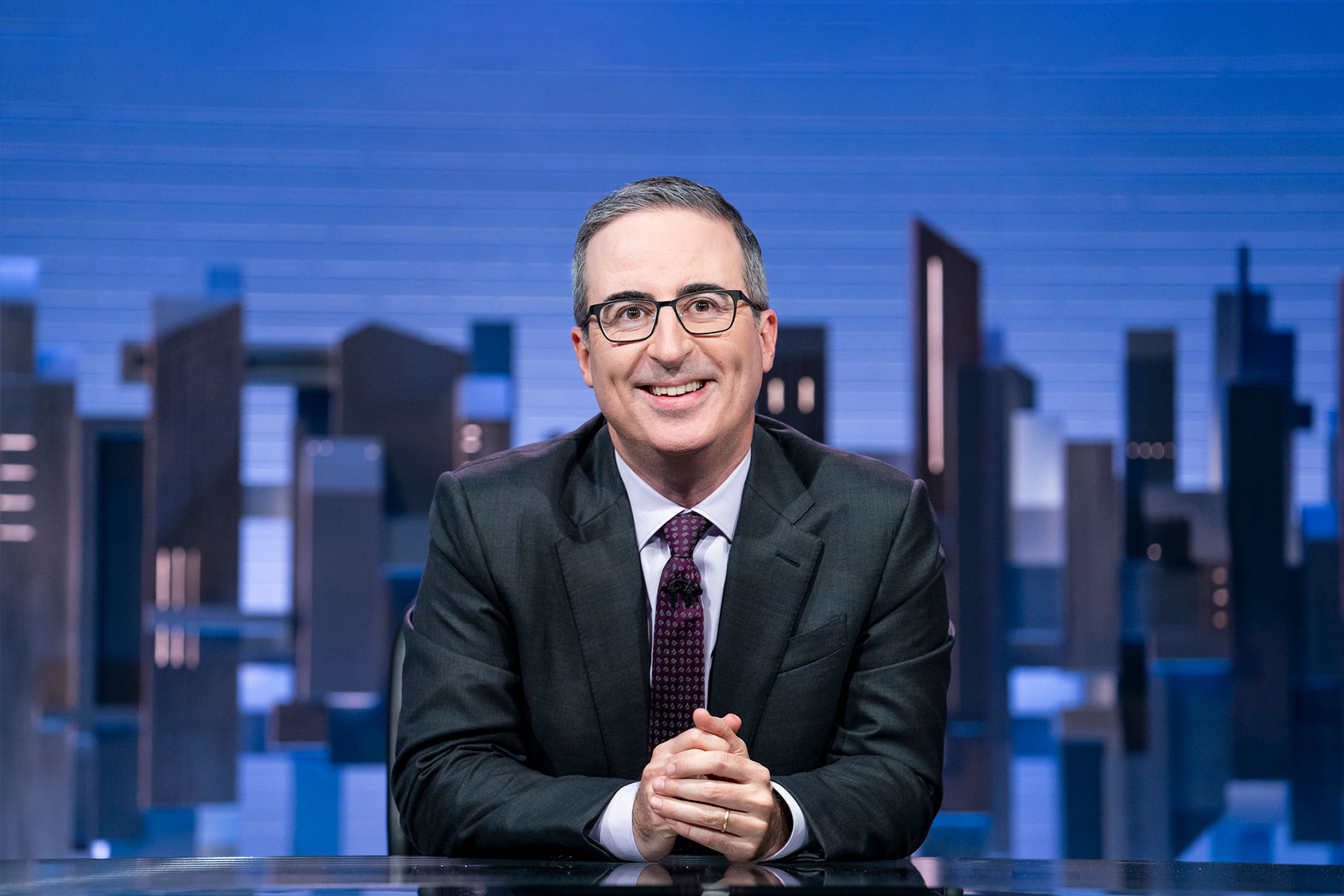 “The Crown” is having a terrific season, in the meteorological definition of the term. By TV quality standards, maybe not. But since Queen Elizabeth II died in September, Netflix subscribers have kept the drama in its most-watched list leading up to its fifth season premiere a week ago.

Since then, it has held its place atop the streaming service’s ranking of popular shows, although that’s always been the case whenever a new season premieres.

Netflix is a global service, but viewers in the United States love some Windsor-related drama almost as much as enjoy prestige flicks about any English royalty, especially when they’re portrayed by Cate Blanchett or Helen Mirren.

So when John Oliver refers to the British Monarchy as “the best thing to happen to white actors since literally everything else” on the Nov. 13 episode of “Last Week Tonight,” the proof was and is but a few clicks of the remote away.

Between BBC America, PBS and premium cable channels, along with a few niche streamers you may have never heard of, the royal family is a constant fixture in worldwide popular culture by design. Coverage of Queen Elizabeth’s funeral magnified that to an extraordinary degree, offering anglophiles the world over the opportunity to appreciate everything she did for the world.

Oliver has long been in the opposition’s camp, and “Last Week Tonight” viewers have long known that. The host’s jests at the British monarchy’s expense have ranged from the playfully benign, like describing Britain as “the country that’s been saying YAAAAAS QUEEN for centuries,” to a couple of swipes delivered days after the queen’s death considered too spicy for the show’s U.K. broadcaster Sky TV.

Among the jokes Sky dropped from its airing of the Sept. 11 episode was one that closed a segment in which Oliver eviscerated there-and-gone prime minister Liz Truss for, among other idiocies, voicing her opposition to taxes that would cut energy companies’ profits as U.K. citizens faced an energy crisis.

After describing Truss as “basically Margaret Thatcher if she were high on glue,” he cracked,  “You may not like this, but I’m going to say it because it’s true. The nicest thing the Queen of England ever did for anyone was die the week that woman became prime minister. Because for at least a week, she’s not going to be getting justifiably destroyed for answers like that.”

Considering that, Oliver’s restraint in waiting two months to deliver a precise and devastating barrage of body blows the monarchy is commendable, although it’s highly unlikely its drop date was randomly selected.

Oliver’s takedown of “The Monarchy” is primarily a cultural, historical, and political education for his viewers in the United States.

The level of monarchal fawning and genuflection in the United States and countries around the globe was astronomical in the weeks following the queen’s death and funeral, even as the knives came out to greet King Charles III’s ascension to the throne. Season 5 of “The Crown” is the “Charles and Diana” season, chronicling the end of their marriage and Diana’s emergence as the rebellious defector from a system bent on stifling her.

Unsurprisingly, the show’s creator Peter Morgan wrote then-Prince Charles more sympathetically than the public perceived him after Diana’s public accounts about his infidelity and the family’s reported careless attitude toward her mental health.

This handsome take on Charles, shall we say, is the least of the illusions Oliver’s episode brutally corrects – although he remarks that Charles “doesn’t have the inscrutability of his mother, or enjoy her level of public affection, and his ascent to the throne comes as the UK is facing a cost-of-living crisis.”

Aside from the quip about the actors, “The Crown” isn’t mentioned at all. But the connection is implied through Oliver’s likening of the Windsors to characters – Britain’s Mickey and Minnie Mouse, save for the fact that funding Disneyland’s denizens isn’t compulsory for American taxpayers. 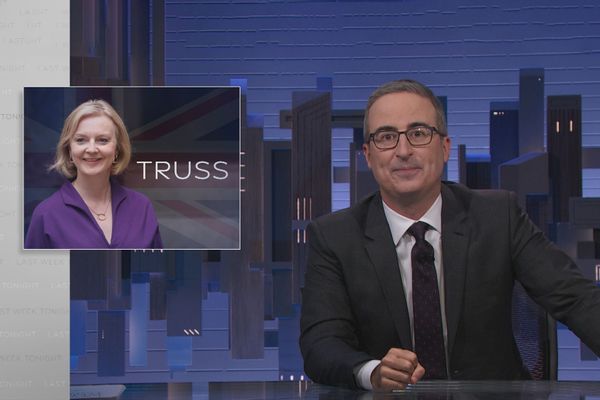 Oliver’s takedown of “The Monarchy” is primarily a cultural, historical and political education for his viewers in the United States. Many Americans don’t connect the image of Queen Elizabeth to either the many inhumane cruelties committed by her ancestors, who built the family’s wealth on the slave trade, marking their captives by branding their skin.

In some ways, Oliver’s monarchy smackdown on “Last Week Tonight” isn’t unusual in its approach. Oliver’s coverage consists of economic arguments against the state supporting the royal family, alongside historic examples and the primo cringe of watching archival Charles bleat, “Ah, dig that crazy rhythm!” as he listens to the work of hip-hop DJs. All of that makes a pretty good case for the British monarchy being, as he says, equivalent to the human appendix. “We’ve long evolved passed needing them, and there’s a compelling case for their surgical removal.”

But really, it’s the moral case against them that is the most compelling in that it reveals our global tendency to accede to their demands of respect as an extension of the unjustified worshipfulness we show to any undeserving people in upper echelons of social and political power. Those who might find it unseemly to liken 67% of the British public’s oak-solid support for the monarchy to the cultish zeal Elon Musk’s and Donald Trump’s faithful inspire in them may fail to fully consider the acts of torture and murder committed in the queen’s name in countries considered to be part of the British Commonwealth.

Musk’s and Trump’s wealth may have been earned by exploiting and discriminating against minorities, but while Queen Elizabeth was on the throne, the British military responded to a Kenyan farmers’ rebellion to reclaim the land the government stole by placing an estimated hundreds of thousands of people in concentration camps.

The Kenya Human Rights Commission has said 90,000 Kenyans were executed, tortured, or maimed during the crackdown. In light of all that, the clip shown of Charles making a vague non-apology deploring this dark history to an audience during one of his tours of the continent and blithely saying, “I hope we weren’t too bad on you,” to an Indigenous man he met in Canada, a member of the British Commonwealth, is . . . not a good look. (Sorry Charles – the British were quite bad on that country’s Native peoples.)

This season of “The Crown” covers Elizabeth’s famous “annus horriblis,” taking us inside the devolvement of what was presented as a storybook marriage to reveal the lie devastatingly. News of the queen’s death moved Morgan to halt production on the show out of respect for the family, even though in the eighth episode, “Gunpowder,” BBC chairman and staunch royalist Duke Hussey (Richard Cordery) delivers what he believes to be a rousing speech about both the BBC and the monarchy being central to Britain’s identity.

It would seem that Oliver would side with BBC director-general John Birt (Nicholas Gleaves) in that conversation, part of the new guard who views it as an inessential vestige of the past – except for the fact that Oliver would probably tell them both to take a flying leap.

This episode of “Last Week Tonight” is merely the latest in a long line of episodes and segments questioning the West’s generous view of Britain as a bastion of civility, an image held in place by the outsized significance we assign to a monarchy whose duties are ceremonial.

Oliver points out that British taxpayers pay 100 million pounds each year for the royal family’s upkeep as part of the Sovereign Grant.  But that amount is eclipsed by the family’s private wealth, the extent of which is a closely guarded secret, and includes the property portfolio of the Duchy of Lancaster and Duchy of Cornwall’s billion-dollar real estate portfolio, which now passes to Prince William.

The Monarchy is not legally liable to pay income tax, capital gains tax or inheritance tax, although the family began paying tax voluntarily (and after a lot of public grousing) in 1993. It’s difficult to refrain from sneering at Hussey’s slavish declaration of gratitude for all the queen has done for Britain without also recalling the dueling voices of two British citizens in our time featured in news clips that Oliver plays.

One, a genteel-seeming white woman, can only explain the monarchy’s necessity by saying “It’s nice that we have it. It’s a British thing, isn’t it? And I think a lot of people would like what we have.”

Another, a young Black woman, explains her reaction to the queen’s death by saying, “It’s like, I care, but I don’t.” When asked to explain what she means, she says that she acknowledges the queen is “a person who died. Like sad, like . . . ” So why doesn’t she care? “She ain’t done nothing for us.”

There it is, captured in its brilliant simplicity – the pull between a view that reasons we keep institutions and practices we don’t need out of tradition, because it’s “nice that we have it,” and another that wonders what makes it worth it.

The West’s esteem for the British monarchy, Oliver shows us, is simply a fancier version of the wealth worship that leads many working people to vote and act against their own interests. And we can distance ourselves from that notion by absorbing it as fiction, and the family as characters in a living, never-ending performance.

Or we can sit with the point he makes at the episode’s end. “Far too often, they hide behind a convenient shield of politeness and manners, which frequently demands the silence of anyone who might criticize them or what they stand for. Will this segment even air on SkyTV in Britain? I honestly don’t know. Maybe. Maybe not.” (To its credit, Sky aired it.)

“But if they do cut it out for being disrespectful, they may want to seriously think about why,” Oliver continued. “Why they and everyone else are working so hard not to offend a family whose name was branded into people’s skin, and who sit atop a pile of stolen wealth wearing crowns adorned with other country’s treasures.”

Will conversations like the one Oliver has presented and many others are having an impact on how we view “The Crown” and other glowing portraits of modern royals? Maybe not. But at least we know the Netflix hit has an end date.

Rihanna Casually Dined at Nobu in a Neon Yellow Set

Why Trump will lose in 2024: He’s committed the cardinal sin of reality TV — he’s boring

Arrive With a Bang Chelsea Handler hosted the 2023 Critics Choice Awards and arrived with a bang, literally! “For my