President Muhammadu Buhari has asked that Yobe State governor, Mai Mala Buni, should be allowed to plan the national convention of the All Progressives Congress (APC) amid the ongoing crisis in the ruling party.
Niger State governor, Abubakar Sani Bello, has since taken over the affairs of the APC following the recent sacking of Buni, who has been accused of scuttling the APC national convention scheduled for March 26.

However, the Independent National Electoral Commission (INEC) in a letter obtained by SaharaReporters rejected a notice of a National Executive Committee (NEC) meeting announced by Bello, saying it recognised Buni as the caretaker committee chairman and not Bello.
But in a letter from Buhari which was quoted by The Cable, the President said the APC “has demonstrated its inability to proceed with the issue of effecting change in the leadership of its Caretaker Extraordinary Convention Committee (CECC)”.
It was learnt that the letter was dated March 16 and addressed to Atiku Bagudu, Kebbi governor and chairman of the Progressives Governors Forum (PGF).

The president said there is a need for the party to avoid litigation considering that the party has aggrieved members who have threatened to go to court.

The Yobe state governor had earlier on Wednesday met with the president who is in the United Kingdom (UK) for a two-week medical checkup.
The letter reads as quoted by The Cable, “It has come to my attention that, because of recent events, the APC is faced with a multiplicity of court cases pending against it in various courts across the country.
“As a result of this, the party faces the possibility and prospect of the invalidation of all its activities and actions by the Independent National Electoral Commission (INEC).

“The party has demonstrated its inability to proceed with the issue of effecting change in the leadership of its Caretaker Extraordinary Convention Committee (CECC), in a way that is inclusive, legal and respectful of the time limit set and required for giving the INEC sufficient notice of the time and venue for holding its convention.

“No doubt, these controversies and uncertainties, as enumerated above, pose a real threat to the party; and may lead to a possible nonrecognition of its activities, elections and the probable invalidation of all its other actions by INEC. This may ultimately even lead [to] its implosion and non-existence.

“First, the issue of the leadership of the Caretaker Extra Ordinary Convention Committee (CECC), should immediately return to status quo ante.
“Second, all members of the governors’ forum and their followers should desist from any behaviour or utterance that will likely lead to disunity in the ranks of the party, and ultimately jeopardise the transition to the convention.

“Third, the Mai Mala Buni-led CECC should, accordingly, be allowed to proceed with all necessary preparations to hold the convention as planned-unfailingly, on 26th March 2022.” 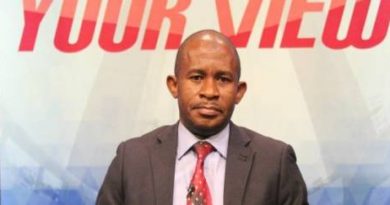 Jonathan Cannot Contest Under The Law In Nigeria By Kabir Akingbolu

Five Things We’re Doing To Fight Back Against Closing Of Civic Space In West Africa, By Kibo Ngowi

U are confused. Labour party don't share money. Is only PDP and APC supporters that are selfish and hungry

Because of you, your entire family shall never beg for food 👋👋 ... See MoreSee Less

✨ Nothing is permanent, not even our problems.
Trust GOD because one day you'll laugh at the problems that made you cry. ... See MoreSee Less

She be everybody sister. Success get many relatives.

She is everyone sister now.🤣🤣🤣

This spin on Milk Bar’s “snaps” are a salty, no-bake chocolate treat