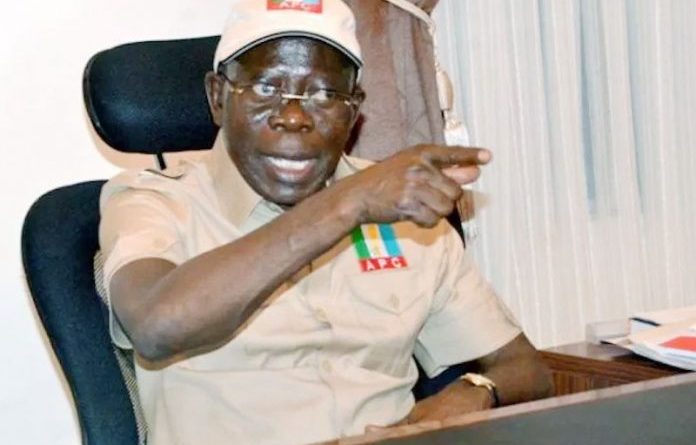 The National Chairman of the All Progressives Congress (APC), Adams Oshiomhole, may have  reignited his feud with the Edo State Governor, Godwin Obaseki, as he insisted on Sunday that it was not within the discretion of the state governor to decide who becomes the speaker
Oshiomhole, who stated categorically that Hon.Frank Okiye was not the Speaker of the Edo State House of Assembly, stressed that he would not close his eyes to illegal decisions and actions capable of derailing the nation’s democracy.
In a statement issued  by his Chief Press Secretary, Simon  Ebegbulem, he describied as arrant nonsense, the allegation by Okiye that he  plans to impeach the governor.
Oshiomhole explained that he had no personal quarrel with Obaseki, adding  that what the governor was supposed to do was to lobby the entire 24 members of the House who are all APC members so as to produce a Speaker of his choice, noting that inaugurating the House at 9:30pm with nine members was a rape on the nation’s democracy.
Oshiomhole said: “First of all, Okiye is not the Speaker; he is member-elect. I watched the governor say those things but the truth of the matter is that he knows better than that. The question I will put to you is, is it within the discretion of the state governor to decide who becomes the Speaker?
“The only option for him is to lobby and if he lobbies and in the end he is unable to get everybody to toe his line, he has to concede that these are not his commissioners or special Assistants for which he has absolute monopoly to appoint. But even at that, if they are commissioners, they must be screened by the House of Assembly, that is the law.
“So, if he chooses to put it in the manner that he has unfortunately put it, giving the impression that as the governor he can do everything, is there anything in the constitution that you know, that empowers a governor to decide who becomes a Speaker.
“But like every other person in a democracy, you get what you are able to negotiate, the operative word is negotiation, persuasion, that is what we did in Abuja. But inspite of all the efforts we invested at the federal level, incidentally as the chairman I was active on that, we conceded in the end when Senator Ndume said he will not go the way the party wanted. We could not deny him that right to contest and he went and contested and he got 24 votes.”
Oshiomhole added that it was not within the power of the President to use the state instrument to prevent Ndume from contesting because it was his right so to do
According to him, all the president could do  was to peddle his influence both through the party and other channels to persuade people to ensure that this time around, APC has a national leadership that the party believes can work in harmony with the him..
Oshiomhole said when he was a governor, he went through the same process,  persuading the members, by calling all of them, first explaining to them the need to ensure geo-political balance.
The APC National  Chairman stresed that sometimes they succeeded, while some other times they did not, but added that the bottomline was that it is the responsibility and absolute prerogative of members of the House to elect the speaker.
Oshiomole said as the saying goes that when a child starts stealing a piece of meat from the mother’s pot, he might grow to become an armed robber, stressing that if the spirit of the constitution is not defended, especially as regards how the legislative arm of government would come into play and reduce it to individual contestation, it would be unfortunate for democracy.

How AMC’s “Interview with the Vampire” will expand on Lestat