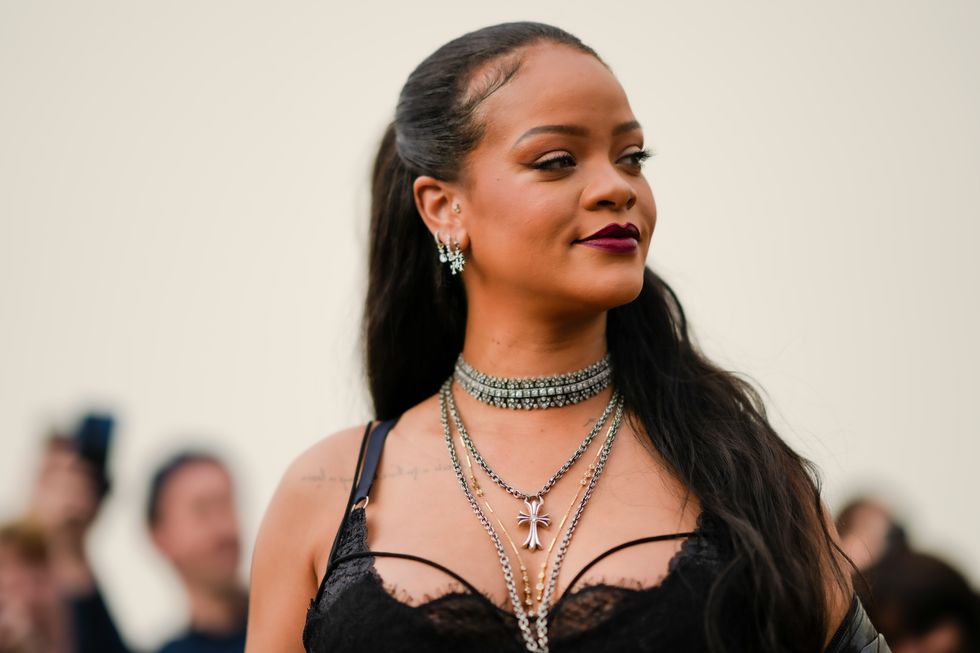 Rihanna welcomed her first child in May, and a few months in, she’s now ready to talk about him. Rihanna spoke to Entertainment Tonight, Vogue, and The Washington Post about life as a new mom and shared the first details about her and her boyfriend A$AP Rocky’s baby boy.

Rihanna explained why she and Rocky haven’t shared their son’s name or any photo of him to The Post—and hinted the information may come eventually. “We just didn’t get around to it yet, really,” she said. “We’ve just been living. But I guess there’s a certain freedom that comes with kind of just like getting it out there.”

She added that her upcoming Super Bowl halftime performance is the rare type of project she’d take on despite being a new mom. “If I’m going to leave my baby, I’m going to leave my baby for something special,” she said. “It was now or never for me [for doing the Super Bowl halftime show].” She added, to the disappointment of many surely, that the Super Bowl gig does not mean she is releasing a new album.

“Super Bowl is one thing. New music is another thing. Do you hear that, fans?” she said with a laugh. “The second that I announced this, I said, ‘Oh, my God, they’re going to think my album is coming. I need to get to work.’”

To Vogue, she detailed more about what her life is like now. “[There’s] not much balance,” she said. “But everything is stimulating. Everything right now is firing off. I’m excited. It’s getting me super motivated, super energized to do new things, to create, and I’m back in the studio and now we’re going to be back on stage for the Super Bowl. Which is just crazy that I even agreed to that, but I am, and I’m excited. Of course being a new mom is insane. It is lovely. It is epic, honestly.”

Her favorite part of motherhood is simple: “His smile. He is the happiest baby,” she said. “No matter what you’re doing or what you’re feeling, when he smiles at you everything else just goes away. It’s the best.”

In her Entertainment Tonight interview, she shared more about how cheerful her little one is when discussing her favorite moments as a parent. “He’s amazing, he’s a happy baby,” she said generally.

Regarding her favorite memories specifically, she said, “Oh my god, the mornings, like, seeing his morning face!” she said. “Seeing a baby with, like, little bags and waking up and they’re just, like, startled. They’re trying to figure out where they’re at. It’s the cutest, it’s my favorite part of the day.” She also revealed she’ll make “freestyle” songs while singing to her baby.

Arizona’s school privatization battle heats up: Will the voters get to decide?

For the love of Mexican cuisine: Revisiting “Like Water for Chocolate” on its 30th anniversary