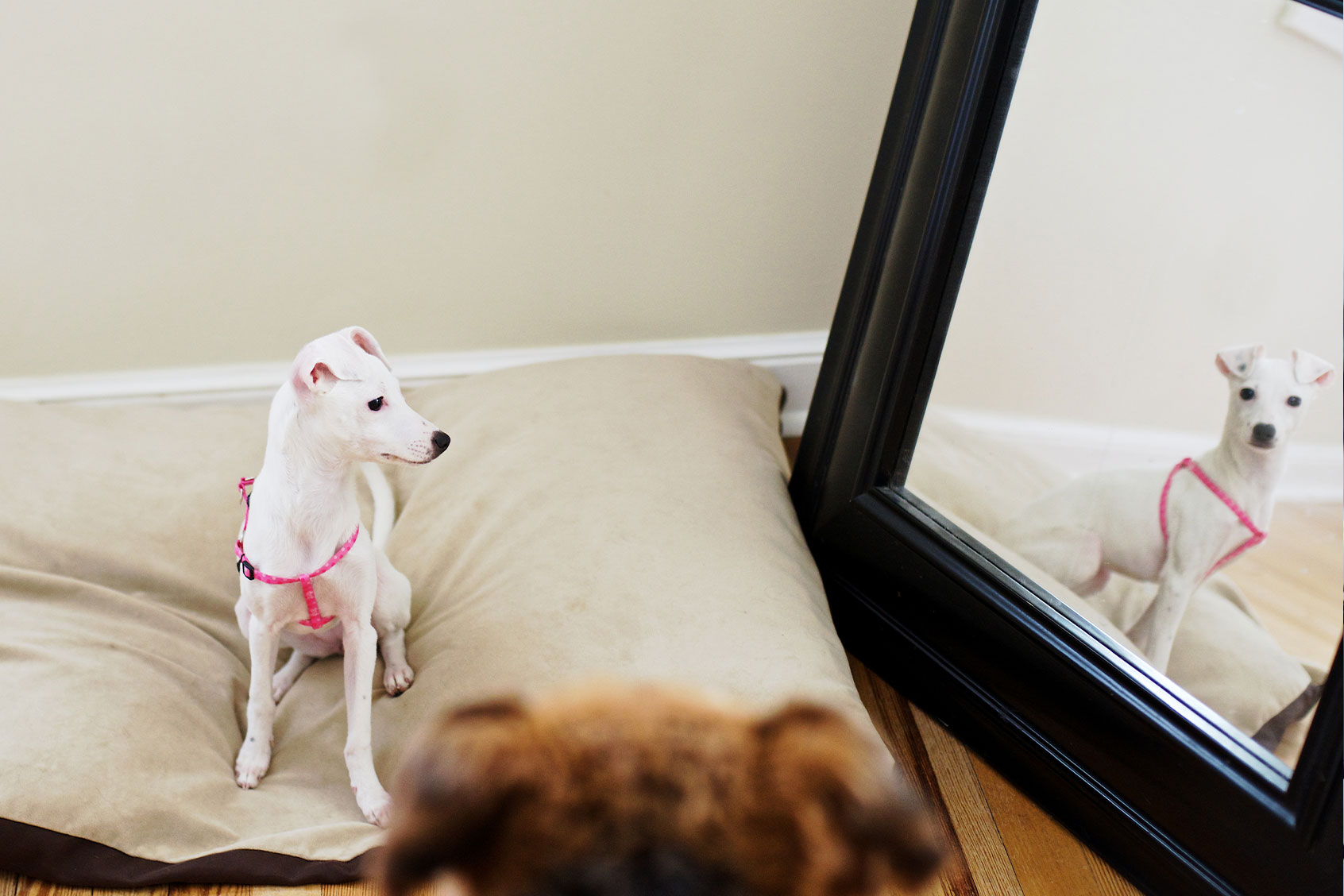 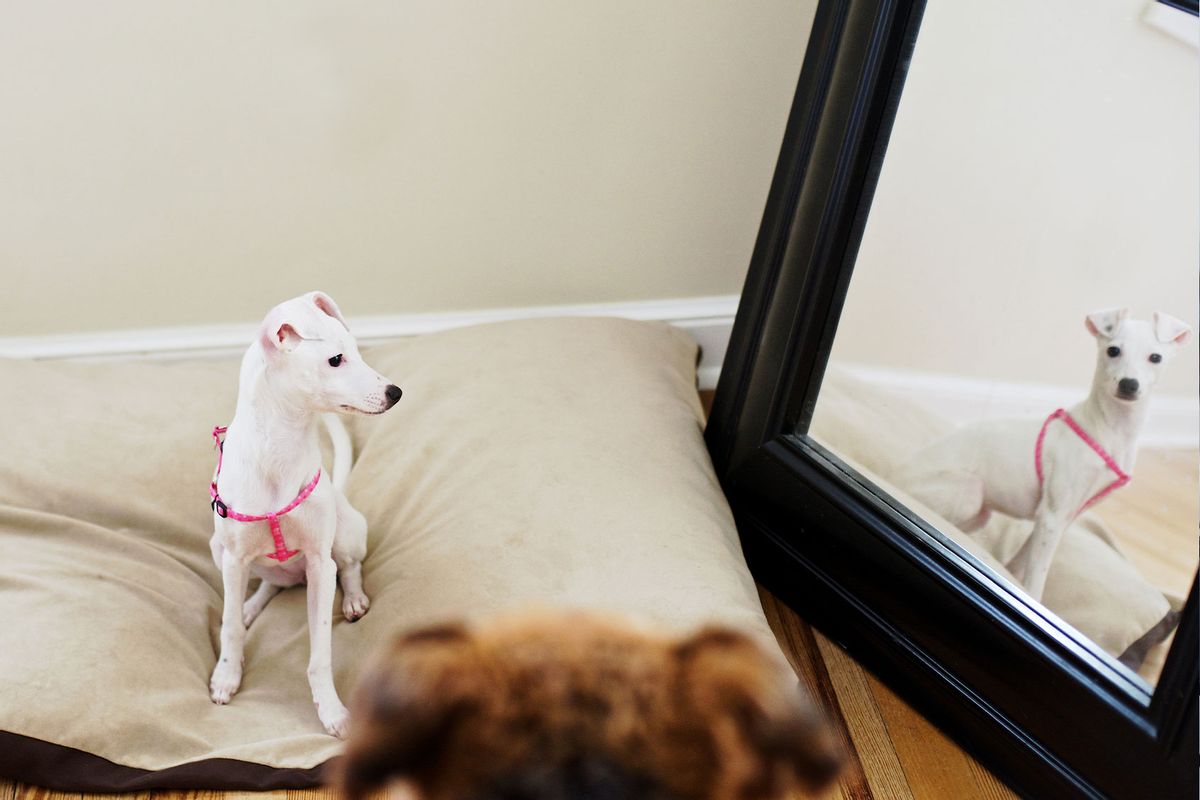 In 2021, Bunny, a TikTok-famous Sheepadoodle, stared at herself in a mirror and asked “who is this?” by tapping her paws on her augmentative and alternative communication (AAC) device’s buttons. The much-viewed video of her pondering herself in a mirror prompted jokes that she was having an existential crisis. Although it is unclear if Bunny was actually aware of her own identity in the mirror, the incident raises questions about animals’ self-awareness — and whether dogs can pass the “mirror test,” considered a defining test of animal intelligence that distinguishes some creatures’ cognitive abilities from others.

For the unfamiliar, the mirror test is used to determine whether an animal has the ability of visual self-recognition, which is considered a marker of intelligence in animals. Scientific evidence has previously suggested that dogs do not recognize themselves in the mirror, at least as far as previous mirror test experiments on canines found.

The test, which was developed by psychologist Gordon Gallup in 1970, involves placing a visual marker on an animal’s body. Scientists then observe what happens when the animal is placed in front of the mirror, watching the animal’s reaction both to their reflection with and without the visual marker on its body. If an animal passes the mirror test, they will usually adjust their body position in a way so they can get a better look at the marker on their body and pay more attention to that part of their body.

RELATED: Bunny the “talking” dog is reporting her dreams

“The mirror test is designed to provide information on whether it’s possible for an animal to recognize itself in the mirror,” Leo Trottier, cognitive scientist and founder of How.TheyCanTalk Research and developer of the FluentPet system Bunny uses, told Salon via email. “Intrinsic to how it works is that the animal needs to be ‘naive’ (needs to have no preparation that might in appropriately skew the result).”

Trottier added for this reason, the visual marker is usually added to the animal when they are unconscious.

“When the animal is again shown the mirror, the animal passes the test if they touch themselves at the location of the mark when they’re able to see that they’ve been marked in the mirror,” Trottier explained.

Currently, there are eight non-human species of animals that can innately pass the mirror test: chimpanzees, bonobos, gorillas, orangutans, bottlenose dolphins, Asian elephants, cleaner wrasse, and magpies. But is it possible that any animal can learn to pass the mirror test, as Bunny (possibly) seems to be inching towards doing? To answer that requires delving into bigger questions about how these experiments are conducted.

“‘You only need one talking pig,’ as the line goes — but does this also mean you only need one cat who recognizes themselves in the mirror?” Trottier said. “I’m not claiming that’s what’s going on here … but it really is quite compelling.”

“One big issue that confronts questions like these is that there are different and somewhat competing paradigms in how science is performed,” Trottier said. “In the conventional paradigm, the interest primarily lies in finding averages: people complete crossword puzzles in X seconds when drinking water, and Y seconds when drinking coffee.”

In this paradigm, Trottier said, exceptions don’t equate definitive answers. The problem lies partly in the fact that it is hard to use inductive reasoning to typify the behavior of all animals of a given species when you only test a sample.

“In the same vein, if we do the mirror test with 10 cats, and find that none of them pass it, then we conclude that ‘cats cannot pass the mirror test,'” Trottier continued. “There is an entirely other paradigm, though, which is interested in the exceptions.”

Trottier pointed to a YouTube video of a cat who appeared to recognize herself in the mirror.

“‘You only need one talking pig,’ as the line goes — but does this also mean you only need one cat who recognizes themselves in the mirror?” Trottier said. “I’m not claiming that’s what’s going on here … but it really is quite compelling.”

In 2018, questions swirled over which animals can pass the mirror test when a study published in PLOS Biology suggested that some fish have the capacity to pass the mirror test. While the study was criticized and deemed “controversial” by some, researchers ultimately concluded that the cleaner wrasse, a 10 centimeter-long fish that lives in reefs and lives up to 4 years, could pass the mirror test.

Joshua Plotnik, an assistant professor of psychology at Hunter College in New York, told Salon via email that when thinking about which animals can pass the mirror test, it is crucial to consider context of evolution.

“The mirror test is an experimental task used to investigate an animal’s capacity for self-recognition, and has only been used experimentally for [around] 50 years,” Plotnik said. “Evolution works far slower, so when we investigate the evolution of cognition, we usually do it by comparing related species that diverged millions of years ago.”

But more importantly, Plotnik questions if the mirror test is the best indicator of self-recognition and self-awareness.

“And not all of these types of self-awareness are measurable with a mirror,” Plotnik said. “The mirror test is simply a tool we use to investigate one type of capacity for self-recognition / self-awareness.”

So, does that mean more animal species can pass the mirror test than we think?

“I’m not sure there are many more species that will pass the mirror test, but I don’t think that really matters,” Plotnik said. “The mirror test is just one tool we use in animal cognition to understand the animal’s perspective or understanding of self.”

“Especially those tools that might allow us to better understand this capacity in less visual species,” Plotnik said.