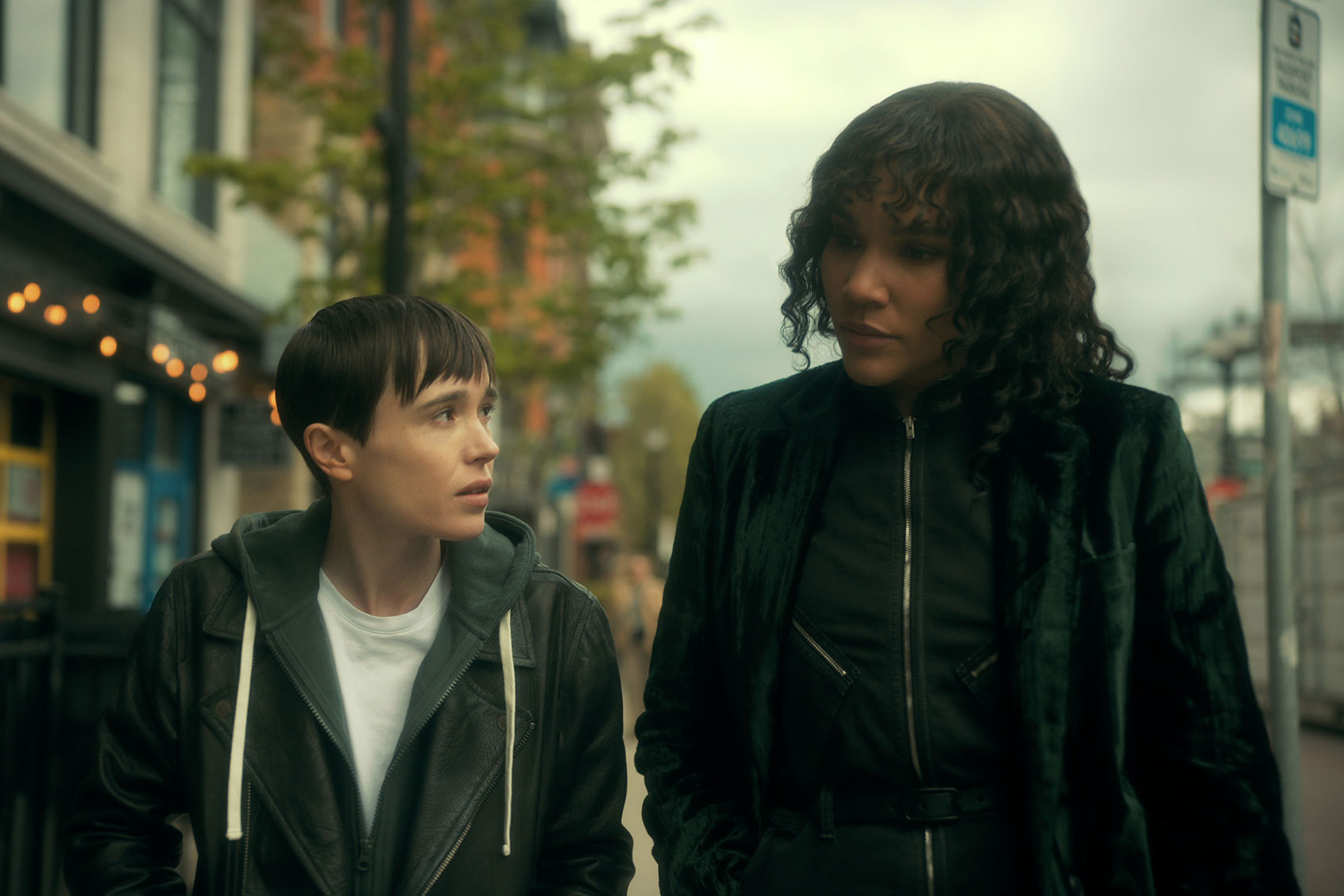 For the curious folks who wondered how “The Umbrella Academy” would introduce Elliot Page’s Viktor Hargreeves into the storyline, the most important exchange of the new season may be the one initiated by his hot-headed brother Diego (David Castañeda) in the second episode.

Viktor joins Diego and his other brothers Klaus (Robert Sheehan) and Five (Aidan Gallagher) at a meeting and announces a bold move he’s made.

“Who elected you, Vanya?” Diego barks at his sibling, leading Page’s hero to pause for a moment and softly correct him: “It’s Viktor.”

Then comes the line meant to explain to the folks in the audience what that means. “It’s who I’ve always been.”

Multiverses and timeline skips are popular story fuel in 2022 courtesy of films like “Doctor Strange in the Multiverse of Madness” and “Everything Everywhere All at Once,” which places the return of “The Umbrella Academy” in fine thematic company. Each explores forgiveness and the wages of emotional damage, and incorporates those psychological trials into stories fueled in some way by an all-consuming desire to realize one of life’s impossibilities: a do-over.

RELATED: Elliot Page reflects how “extremely f***ed up” it was to be forced to wear a dress for “Juno” press

The third season picks up where the second season finale left off, with Viktor and his siblings, including his other brother Luther (Tom Hopper) and sister Allison (Emmy Raver-Lampman), returning to 2019 after leaping backward to 1963.

Multiverses and timeline skips are popular story fuel in 2022.

Only in this version of 2019, their presumed-dead father, Sir Reginald Hargreeves (Colm Feore) is alive and has adopted another set of extraordinary children instead of The Umbrellas, naming them The Sparrows. (They also discover their seventh sibling Ben (Justin H. Min) is alive in this timeline and raised as a Sparrow instead of with them.)

Adventuring in 1963 changed each of them as well, most significantly Allison and Viktor, who was known by his previous name at that time. Both found their true loves in that past, with Allison falling for Raymond (Yusuf Gatewood) while contending with violent discrimination in Jim Crow America and Viktor discovering a supportive, equitable romance with a woman named Sissy (Marin Ireland) who was trapped in a loveless marriage.

I’ve seen enough TV and endured plenty of mindless interpretations of alternate universes to know how miserably Viktor’s introduction might have been handled by less capable writers. But “Umbrella Academy” showrunner Steve Blackman and his team – including trans writer Thomas Page McBee – weave Viktor’s experience into a plotline that’s already running at full speed without a hitch.

They execute this in ways that seem deceptively simple at first.

Diego, Klaus, and Five are the first of his family to whom Viktor comes out, but in the previous scene, we see him getting a haircut, freeing himself of the curtain that partially defined his old mousiness. Then again, even in his earlier presentation, he was growing in courageousness – such as sitting across from an adversary and speaking to him calmly while making the world quake around him. It’s as if his full power could no longer be contained by the vessel everyone else knew.

Not every work of fiction featuring a transgender performer is necessarily a story about transness. At the same time, I appreciate the ways that genre fiction like “The Umbrella Academy” strives to do through Viktor’s subplot. “The Matrix” films cannot and should not be the foremost metaphorical guides through that journey; plus, Page’s status as one of the most famous transgender people on Earth demands his character step into the fullness of his identity with more significance than a visit to the barber.

Season 3 does this on many levels, first by acknowledging the ways Viktor’s relationship with Sissy, long dead in 2019, begins the process of unlocking who he really is. “You don’t even notice the box that you’re in until someone comes along and lets you out,” Sissy says in the second season.

Boxes become a recurring symbol this season, whether via dialogue, found schematics, or even in the siblings’ new headquarters at an odd hotel called The Obsidian, where sleeping arrangements are split between the boys – Diego, Five, Klaus, and lovable lug Luther – and Allison and Viktor, in his old presentation. 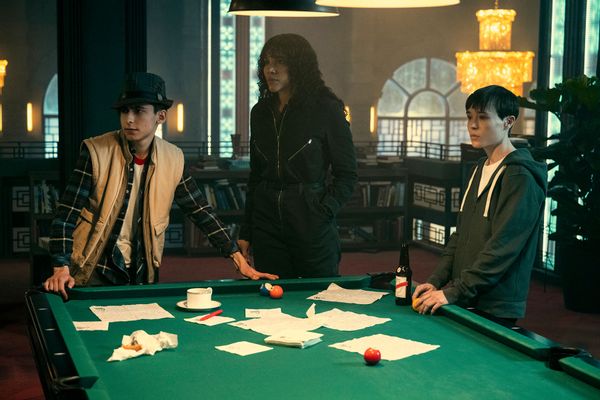 “You’re a good sister,” she says while embracing Viktor, leaving him in their temporary box to embark on a solo trip. Allison meets Viktor when she returns and, upon beholding his true presentation, chastises herself for not realizing it all along.

“You couldn’t have known, because I didn’t fully,” Viktor explains. “Being with Sissy, I don’t know, she opened something in me. Showed me I’d never be free hiding from who I really am. And after losing her, I realized I just can’t live in that box anymore. I won’t.”

None of his family asks him to since, yet again, there’s another apocalypse to avert. Only this one differs from the previous, in that it doesn’t fundamentally spell simple disaster but a possible reset of life and time as everyone previously knew it.

“You don’t even notice the box that you’re in until someone comes along and lets you out.”

But it also requires each of the siblings to be at full strength – and Viktor only discovers his when Sissy’s autistic and mute son Harlan, who has aged into an old man (Callum Keith Rennie) tracks him down. In the past, Viktor had transferred a portion of his power to Harlan while saving his life. Now, in 2019, Harlan helps Viktor to reintegrate it into his body, making him whole. And this fully empowered Viktor wears his skin comfortably and stands up to far more imposing adversaries without much hesitation, which is as far from the kid in the first episode whose father tells them, “I’m afraid there’s just nothing special about you.”

There’s another subplot connected to Viktor’s emergence that might simply have been created for the sake of introducing conflict, which is the schism that surfaces between Allison and Viktor. Before Allison leaves for her trip she trusts in the bond she has with her sibling; in her mind they are, after all, the two only girls on a team of six. But on her trip, she discovers her daughter never came to be in this timeline and returns to a confidante who is a man.

“You’re family,” Allison assures Viktor during her walk. “There’s nothing, nothing that would make me love you less.”

Of course, this is foreshadowing. Intentionally or otherwise – their walk-and-talk marks the start of a conversation about the difficulty some people have letting go of expectations they have of loved ones, some of which are gendered. Before Viktor’s transition, he and Allison had toasted to being sisters among brothers, able to share secrets with each other they couldn’t possibly trust with their doltish or heartless siblings. When Viktor realizes he has to risk his safety to regain his power, it’s Allison who stays with him to keep him safe. Because ideally . . . that’s what sisters do.

What breaks their bond is a secret Viktor holds back – for a noble reason that still isn’t enough to satisfy the person to whom he was once closest. The writers could have written any other character into that situation with Viktor, since the secret impacts all of them, but for Allison, the betrayal is doubled since it robs her of her self-identities as a daughter and a mother. And the way she retaliates is particularly cruel.

Then again, it’s also typical for a band of adopted siblings raised by a father who cared about them only for their abilities instead of accepting them for who they are. We’re reminded of that in the current arc’s climax, where the fate of everything comes down to a matter of trusting oneself and each other. Viktor, at long last, is his whole self. Allison, less so.

This spoils nothing about the last two shock-laden episodes of the season or the fact that the denouement circles back to a conversation Viktor and Allison share during their walk together. To his brothers, Viktor simply reveals his name. But to his sister, he reveals the things that have been weighing on his soul.

“You know, I always hated mirrors,” he says while looking at his reflection in a shop’s window. “I thought everybody always felt so strange in their skin. I guess that’s not true, is it?” In the last scenes of the season that feeling becomes true, only for reasons nobody could have predicted.

One constant is how Viktor sees himself at the end of a throttling journey that has decimated most of humanity. As Viktor looks at that glass, Allison asks him what he sees now.

Season 3 of “The Umbrella Academy” is now streaming on Netflix. Watch a trailer for it below, via YouTube.

GOP splinters over effort to crack down on Big Tech

There’s an unwritten rule in the world of aesthetics: If Kim Kardashian is doing it, people will be interested. Such