Barcelona will listen to offers worth €100 million for midfielder Frenkie de Jong after holding formal talks with Manchester United over a transfer, sources close to the negotiations have told ESPN.

Barca are prepared to let De Jong leave this summer to help balance the books amid an ongoing financial crisis at the club, but sources have told ESPN that does not mean they will allow him to leave for cheap.

They are willing to negotiate the breakdown of the fee, such as how much of the price is upfront and how much is in add-ons, but they want the total package to be around €100m.

Barca had hoped to negotiate a higher fee as Manchester City, Paris Saint-Germain and Bayern Munich have all shown an interest in De Jong in the past — and could return with bids — but they have not yet taken that interest to the next level because of the figures quoted so far.

United, who are also yet to reach Barca’s asking price, have made De Jong their primary midfield target following the departures of Paul Pogba and Nemanja Matic.

The Premier League side have upped their pursuit of the Netherlands international following the appointment of Erik ten Hag, who coached him at Ajax, and have held talks with Barca about a deal.

De Jong, 25, is on international duty, preparing for the Netherlands’ Nations League matches against Poland on Saturday and Wales on Tuesday.

He has reiterated his desire to stay at Barca while with the national team, but United remain hopeful of convincing him to make the switch to Old Trafford even though they will not play in the Champions League next season.

Barca coach Xavi Hernandez has said he would prefer to keep De Jong, who joined the club for an initial €75m in 2019, but conceded the need to bring in revenue to fund an overhaul of the squad could force them to listen to offers.

De Jong has been a regular under Xavi but Barca are well stocked in midfield, with AC Milan‘s Franck Kessie set to join on a free transfer to compete with Sergio Busquets, Pedri, Gavi, Nico Gonzalez and De Jong, if he stays.

Barca are still around €1 billion in debt and will next week ask club members to authorise them to sell a stake in future income from merchandising and television rights to provide an immediate cash fix.

Vice president for finance Eduard Romeu said this week in an interview with Diario Sport that Barca need to raise €500m to “save themselves.” 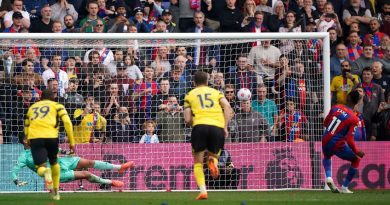 Watford relegated from PL after defeat at Crystal Palace