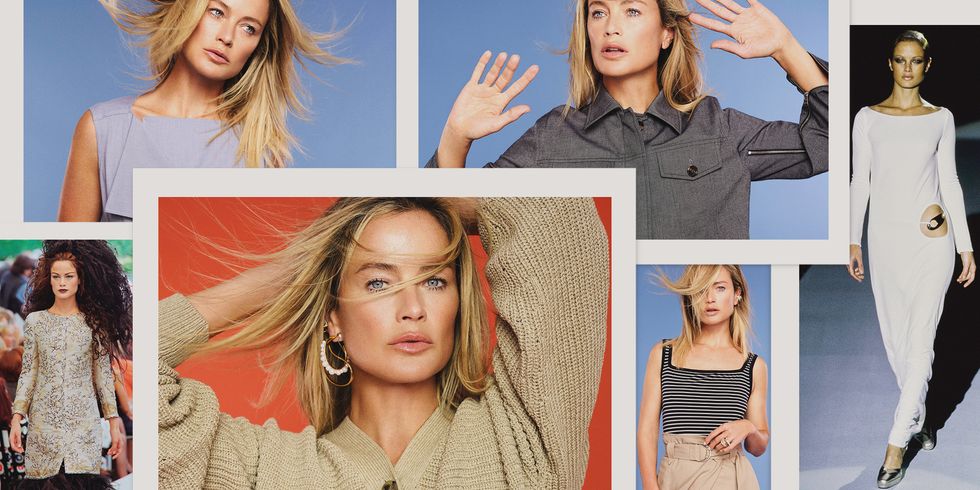 Style Points is a weekly column about how fashion intersects with the wider world.

Before it took her to the runways of Tom Ford-era Gucci and Karl Lagerfeld-era Chanel, Carolyn Murphy’s romance with fashion began with a humble pair of Care Bears jeans. Growing up in small-town Florida, she says, “I wasn’t really exposed [to fashion] outside the local shopping mall.” But she began re-working clothes at a young age, taking those ursine mascots and re-stitching them onto a new pair when she outgrew the first one. “Or I would try to re-create the Polo label with embroidery”⁠—long before she ever set foot on Ralph Lauren’s runway. She also looked to her grandmother, who would hand-sew her family clothes complete with labels that read “Made with love by Nana.”

“It’s because of modeling that I have an understanding of fashion,” she says now.
“Working so closely with designers, doing shows where we’re at these lengthy fittings, but also seeing their tailors at work, especially during couture. It was always right there, and I paid attention. I listened and learned so much,” she says. Still, “I didn’t really intend on getting into the design world myself.”

Murphy wears a dress from her collaboration with ADEAM.

Courtesy of the brand

But lately, she’s been doing just that. After collaborating with the L.A.-based line Mother on an upcycled range last year, Murphy has yet another design foray coming out. And this one is quite personal. She worked with ADEAM designer Hanako Maeda on a collection celebrating the 10-year anniversary of the brand, inspired by Murphy’s early modeling days in Japan. With both projects, “I of course jumped at the chance, especially because they’re more conscientious lines,” she says. The collection will be available on the brand’s website and in a Madison Avenue pop-up, open through July.

Murphy sent Maeda an inspiration board of things she loved, including art and ceramics made by Japanese female artisans. She also drew on the clothes she wore in her early modeling career in Japan. “In the early ’90s, it was kind of Paris or bust,” she explains. “I did try that my senior year of high school and it wasn’t really for me. I just said, ‘Well, if this is what modeling is, I’m not going to walk around in minidresses and go out to clubs all night.’” When she moved to Japan to continue her modeling career, she found the terrain to be “more my speed. It was a great work ethic. I knew what to expect. I was working six days a week, sometimes two or three jobs a day, but that’s where I thrive.”

The relocation was the beginning of a lifelong love affair with the country, its history, and the variety of its natural landscapes. Not to mention its fashion. Murphy, glad to shed her minidresses, carved out a style niche: “pared-down classic pieces, neutral colors. Things that you can depend on and you can always have in your wardrobe.” She favored simple, utilitarian pieces from “no-name stores,” which she has gone on to re-interpret for the ADEAM collection, from foldover shorts to a sleeveless dress inspired by a trench she owned back then.

Murphy in pieces from the ADEAM collaboration.

Courtesy of the designer

With Murphy in L.A. and Maeda in Tokyo, the design process was done remotely. “It was such an eye-opening experience to see the pieces in her wardrobe that stood the test of time,” says Maeda. “Carolyn has worked with so many designers and experienced different trends, so she has a very refined eye for pieces that are timeless.” Maeda adds that the two wanted to pay tribute to the way “people in Japan revere and live in harmony with nature,” using sustainable textiles and yarns for the collection, including recycled cotton cashmere and organic cotton denim. Many of the materials were locally sourced. Says Murphy: “I love that part of it, receiving the swatches and saying, ‘Okay, this is coming from this farm and this family in Japan, it’s been three generations, looming and dyeing.’ Storytelling is such a big part of this collection, which again, makes it more sentimental.”

Murphy, who was recently honored at the Sustainable Style Awards, is quick to note, “I’m definitely not on a soapbox…I am not the sustainability queen. I’m also not the information source when it comes to that. There are a lot of other people out there who are really spearheading that. I just choose to live a very simple, back-to-basics lifestyle.”

She estimates that three-quarters of her wardrobe is vintage. “When I do buy something, it’s something I’m going to have for a while, and it’s not going to be disposable.” Murphy found herself becoming increasingly distressed “having raised a daughter who was shopping a lot of these fast-fashion places where I was just disgusted, watching her and her peers. I was working with some of these brands intimately, [and] I said I wouldn’t work with them until they agreed to do something that was more in the sustainable realm. I think we all have to push each other.”

Speaking of sustainability, Murphy did indeed clock Bella Hadid’s re-wear of the Tom Ford-era Gucci dress she originally wore in the fall 1996 show: “Oh my God, I got so excited. In fact I reposted a photo and then I took it down 10 minutes later because I was, like ‘Wait, what am I doing?’ I get self-conscious about it. But that was my initial reaction. I was so excited. She looked beautiful. And that’s what I said in my post, was Bella looked so beautiful in this dress and how nice it is to see off the runway and on her, 25 years later. She’s actually one of the current models that really seems to not only love fashion, but goes deep.”

That fashion moment brought her back to a heady period of time. “You could feel the excitement at the shows. It was palpable,” she recalls. When she watched House of Gucci, “I was laughing, because I just remember being there,” hearing this young Texan phenom tell her how much, with her blond hair and golden skin, she resembled his mother.

Tom Ford wasn’t the only designer who made an impact on her. “The first time I took a private plane was with Karl Lagerfeld. We had shot the Lagerfeld campaign at his house in Hamburg. I had never seen anything like it. It was like a castle. Then we fly to Paris, and he didn’t want me staying in a hotel. He wanted me to stay with him,” she says, remembering how excited she was to spend the night where Naomi, Christy, and Linda had before her. Their bond continued for decades, with Lagerfeld sending Murphy and her mother thoughtful gifts. (“You could say that you loved a certain perfume, and next thing you were getting it sent to your house.”)

She also remembers closing out a Versace couture show as the bride. “I stumbled on the runway and stormed off crying. [Gianni] sent me flowers to my hotel later, with a note saying, ‘I know our marriage is off to a bad start, and it’s our honeymoon night. Please join me for dinner?’”

The thing she misses most about those days is the absence of social media, which “has added this other layer of self-promotion. I’m the worst when it comes to Instagram. I do try. I have my daughter who gives me pointers. What I miss about it is I always prided myself on having that healthy separation. And I think that was valued at some point, that you weren’t out at every party, hobnobbing with every photographer and editor. Now, there’s nothing sacred. Everything is just so exposed and exploited. I’m hoping that it reels back a little bit.”

She’s nostalgic for a pre-internet world in other ways, too. When working with the likes of Steven Meisel and Pat McGrath, they would “come in with trunks filled with books, or they’d say, ‘Go home and watch this film tonight.’ There was a real education. Now you just click a button, see an image. There’s no real connection. There’s no finding you there.” Murphy had the luxury of getting to develop her style in an analog world, and with this collection, she’s officially sharing the wealth.

Should “food diaries” be assigned in schools? Experts point to potential dangers for youth