The Ike Ekweremadu Campaign Organisation has asked supporters to remain calm, saying it will appeal against the judgement of the Abuja Federal High Court, which dismissed the suit seeking to uphold its list of the Peoples Democratic Party (PDP) three-man ad-hoc delegates in Enugu State.

The organisation, in a statement in reaction to the judgement, titled: “Judgment On The 3-man delegates list to be appealed”, signed by its Director-General, Ogbo Asogwa, described the judgement as shocking.

The supporters of the former Deputy Senate President had at the wake of the Ward Congress of the PDP in Enugu State, held on April 30, 2022, sought an order from the court to uphold its list of three-man ad-hoc delegates.

They argued that their delegates were elected in compliance with the PDP Constitution and Guidelines for the Election of Three-Man Delegates of the party.

But on Tuesday, the court dismissed the suit and held that there was no parallel delegates election in the state.

But reacting to the judgement, the Ekweremadu Campaign Organisation appealed to its supporters to remain calm, adding that judgement “is just the court of first instance”.

“Our lawyers have been directed to immediately file a Notice of Appeal against the judgment and we will surely pursue the matter to a logical conclusion.

“We trust God and believe that victory will be ours eventually, for no matter how fast falsehood and injustice appear to travel, truth and justice will ultimately overtake both in the fullness of time,” it read.

Why I Don’t Want Endorsements From Obasanjo, Babangida Unlike Some Other Candidates – Sowore, AAC Presidential Candidate 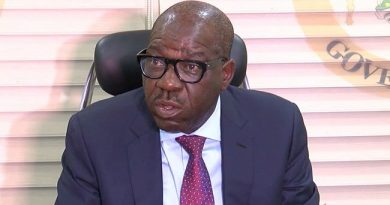