Human rights activist and Senior Advocate of Nigeria, Femi Falana, says former President Goodluck Jonathan cannot seek re-election into the office of the President, according to the constitution.

President Muhammadu Buhari had on June 4, 2018, signed a constitutional amendment that stops a Vice President who completes the term of a President from contesting for the office of the President more than one more time.

The law also stops a deputy governor who completes the term of a governor from seeking a second term in office as a governor.

A President’s term can be cut short by reasons of death, resignation, or death to pave the way for the Vice President to complete the term of the departed President.

Following the death of then-President Umaru Yar’Adua on May 5, 2010, Jonathan as the then Vice President, took a new oath of office to complete Yar’Adua’s term as President.

He was also sworn in for another term on May 29, 2011, after he won the presidential poll of that year.

Falana in a statement on Wednesday night said Jonathan is affected by the constitution amendment.

“It has been confirmed that former President Goodluck Jonathan has decided to join the All Progressives Congress (APC) with a view to contesting the 2023 presidential election.

“However, the former President is disqualified from contesting the said election by virtue of 137 (3) of the Constitution of the Federal Republic of Nigeria, 1999 as amended which provides as follows: A person who was sworn in to complete the term for which another person was elected as President shall not be elected to such office for more than a single term.”

Jonathan’s posters had last week flooded the national secretariat of the APC.

Some youth groups also stormed his office in the Maitama area of Abuja, calling on him to join the presidential race.

The protesters lamented that since he left office, hunger, insecurity, and unemployment, among others had become the order of the day.

The supporters said that both men and women have turned to beggars because of the unfavourable policies of the present administration.

In his response, the former President said he could not say if he would declare or not but advised “his supporters to watch out”. 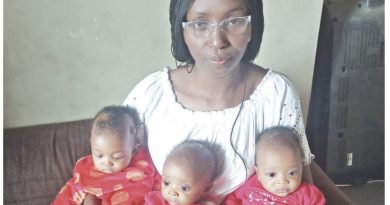