Ahead of the 2023 general election, a group, Sowore Political Action Committee (SPAC) has invited Nigerians to join its team to help sponsor the Presidential campaign of human rights activist, Omoyele Sowore.

Those who want to support Sowore’s presidential ambition financially can now do so by using Paystack.

Paystack is a platform that allows businesses to accept payments via credit card, debit card, money transfer and mobile money on their websites or mobile apps.

Meanwhile, SPAC, in a short public notice issued by Damian Ugwu, explained that its duty as a Political Action Committee is to help in raising money privately to influence elections or legislation, particularly at the federal level.

According to the briefing, the system is commonly used in the United States of America.

SPAC, which described Sowore as a man of conscience and uncommon courage, said each member of the group is required to donate between N50, 000 and N1 million monthly.

As of April 8, a total of N852, 000 had been raised to support Sowore in his bid for the Presidential seat.

The notice reads, “You’re cordially and respectfully invited to join the “SOWORE POLITICAL ACTION COMMITTEE (SPAC) for the Nigerian Presidential run of Omoyele Sowore, a renowned activist, teacher, publisher, and a man of conscience and uncommon courage.

“It is an organization that raises money privately to influence elections or legislation, particularly at the federal level. (Commonly used in the USA).

“If you agree, we will add you to a broadcast list, you’re also to feel free to suggest those who might be willing to join. Every member is expected to donate between N50k -and N1 million between now and the general elections in February 2023.

“Good Morning TEAMSOWORE2023: As we’ve always promised, we hereby notify the house that we have raised N852,000 as of this morning. We hope members will make their donations to this project.

“Below is the Nigerian Account number and our team will release monthly account statements for transparency purposes. 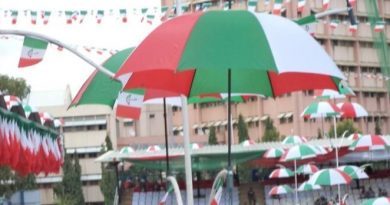 PDP: Edo APC now a joke… they should join other parties for reasonable impact – TheCable