A campaign organisation for the governor of the Central Bank of Nigeria, Godwin Emefiele’s presidential ambition has been registered in London, a report by Peoples Gazette noted.

The organisation, Diaspora for Emefiele Limited was reportedly registered by Martins Abhulimhen, an ally to the CBN governor on March 29, 2022, under approval number 14010119, code 99000 of Standard Industrial Classification (SIC), which accommodates activities of extraterritorial organisations and bodies in Britain.

Though Emefiele had yet to officially declare his intention to contest the presidency, his campaign posters and vehicles had been sighted in some parts of the country.

SaharaReporters had reported how Emefiele’s supporters, mainly youths, spotted white T-Shirts with the inscription MEFFY 2023 at an occasion held in Lagos in February to draft him into the race.

Convener of the group, Wale Fapohunda, had told the gathering that since Emefiele’s appointment as CBN Governor, he had spent his energy building a resilient financial system that can serve the development needs of the economy, ignoring the glaring fact that Nigeria’s economy had dipped to its worst state ever during Emefiele’s tenure as CBN governor.

The rumoured ambition has elicited outrage from the opposition Peoples Democratic Party (PDP), which warned of gross economic sabotage being inflicted on the country and demanded the governor’s immediate resignation. 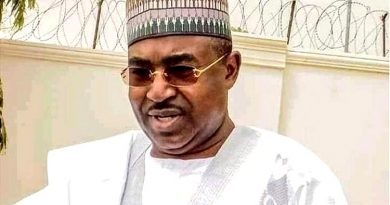 ELLE Read all of The State of Black Beauty here. The large mirror on my bathroom wall has witnessed more