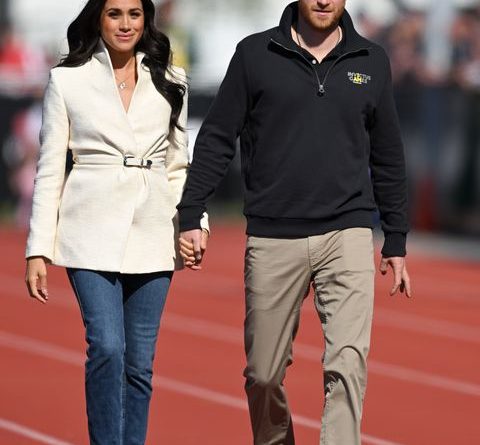 On the second day of the Invictus Games, Meghan Markle and Prince Harry were once again wearing chic and comfortable looks perfect for the day’s sporting events. On Sunday, the Duke and Duchess of Sussex were watching a volleyball match in the Netherlands, after a long night of opening ceremonies the evening before.

Meghan wore a short white trench coat, cinched at the waist with a high collar, over blue jeans and tan heels. Harry wore khakis and a black, quarter-zip pullover featuring the event’s logo. Meghan left her hair down, and wore simple jewelry, including a silver pendant.

After the game, they met with several competitors, who seemed pretty thrilled to meet them. In this photo, they’re being embraced by Lisa Johnston of Team United Kingdom, who is wrapped in her country’s flag.

Harry and Meghan made their first public appearance as a couple at the 2017 Invictus Games, attending a wheelchair tennis match in Toronto. They became engaged in November of that year, or at least officially announced it. The games are a big deal to Harry, who established them so wounded and injured service people and veterans would have an opportunity to compete as athletes. Harry served in the UK army himself, so it’s a matter that’s quite personal.

Previous Invictus Games have been held in London, Orlando, Toronto, and Sydney, and this year’s tournaments were delayed due to COVID-19. They are next planned for 2023 in Düsseldorf, Germany.

The journey to Netherlands for the Duke and Duchess marks the first time the couple have returned to Europe since leaving their posts as working members of the royal family and their move to Montecito, California. They stopped by the UK to visit Queen Elizabeth this week before the games began.

The 8 best beverages to buy at Costco