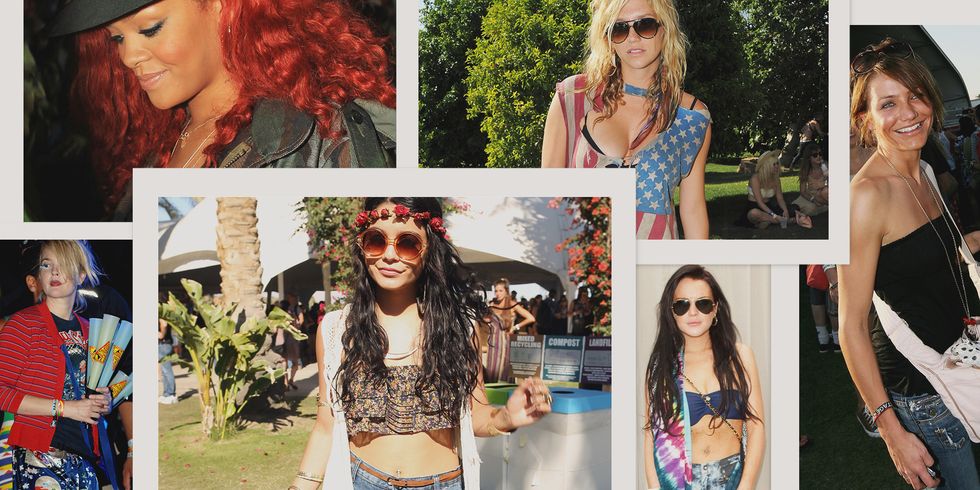 Style Points is a weekly column about how fashion intersects with the wider world.

They flocked to the desert like heat- and EDM-seeking missiles, in micro-cutoffs and flower crowns slowly wilting in the heat, finding an oasis of music, style, and brand activations aplenty. This weekend, when Coachella comes roaring back after a two-year absence, what will its attendees’ style look like? And, though it still adorns the sites of many retailers, is “festival style” even a relevant concept anymore?

The 2000’s and early 2010’s definition of festival style leaned heavily on a ’60’s bohemian aesthetic diluted by fast fashion–epitomized by Vanessa Hudgens in an abbreviated top, flower crown, and Summer of Love sunglasses. (Had the descriptor “cheugy” been around at the time, it might have applied.) Back when a dollar sign bisected her name, Kesha wore a tattered American flag T-shirt as a dress, while Rihanna and Beyoncé favored frayed cutoffs.

Casey Lewis, who writes the youth culture and consumer trends newsletter After School, thinks that now that there’s a new festival generation on deck, we’ll be seeing some changes. “I think it’s going to be essentially Gen Z-ified,” she says of Coachella fashion. She predicts “we’re going to see extremely Euphoria vibes,” as well as Y2K influences, whether those are re-creations from fast-fashion brands like Princess Polly and Shein or the O.G. looks, thrifted on Depop.

When it comes to overlap between the millennial and Gen Z festival aesthetics, she says, “I do think that the one theme that will remain the same is absurd amounts of skin.” Which might include abbreviated hemlines, “with the micro mini skirt being almost memeified” of late. One thing we’ll likely see less of: the problematic use of motifs like Native American headdresses that sullied the earlier days of festival fashion. “Gen Z cares about cultural appropriation. They are ready to raise a flag before anyone. I don’t think we will see cultural appropriation to the extent that millennials were guilty of it,” Lewis says. “These kids spend enough time on social media, on TikTok, and they see there’s just so much [information] about what not to do as a decent human.”

As aspiring Maddys and Cassies head to Indio, the anticipation driven by several uncertain years of semi-isolation could also spur some welcome innovation in the genre. “The excitement and pent-up creativity waiting to explode is tangible,” says Lorna Hall, Director of Fashion Intelligence at WGSN. On TikTok, she says, the pre-Coachella conversation includes videos about planned outfits and trend forecasting for the event. Lewis says we might see an explosion of TikTok Coachella trend coverage, much as we saw sorority rush trends crest on the app last year.

Rihanna at Coachella in 2011, wearing cutoffs, a longtime festival-fashion staple.

“When you think about this younger generation, getting to go to a music festival feels like a rite of passage in many ways, and for two years they were not able to do that,” Lewis points out. “They weren’t able to do so many things that they would’ve otherwise been able to do. So I feel like [for] people, especially these kids that watch Euphoria, it’s like, ‘This is my moment.'”

Hall says she is seeing more personalization and a DIY approach prevailing, in much the same way we’ve seen street style evolve towards being more one-of-a-kind. “The surge in thrifted shopping and styling that we have seen in the last two years has not really been seen at mass festivals before, but it plays a huge part in Gen Z styling now,” she says. “Today’s festival outfitting stance is no longer about nailing a uniform look at a specific event, e.g the flower crowns and denim cutoffs approach to the Coachellas of the past,” but much more focused on individuality.

That said, even individuals are subject to trends. Like Lewis, Hall foresees a plethora of Y2K-era motifs and Euphoria inspiration, “particularly string tie-based scanty tops and dresses that allow plenty of skin to show.” Cutouts, bold color, and wavy, distorted prints also promise to be big. (Thermal imaging prints are trending among dance music aficionados on TikTok.) “At the more indie music level we will see indie sleaze looks remain strong,” along with crochet looks and the ever-present Western aesthetic: cowboy boots aren’t going anywhere.

“I think people are going to be pulling off capital-L Looks,” predicts Lewis. But she speaks for many veterans of past Coachellas when she says, “My main takeaway is: I’m so much happier following this trend moment from home and not being there.”

Controlling bodies and subverting democracy: How Dobbs is an attack on us all

Wait, can you paint over wallpaper?