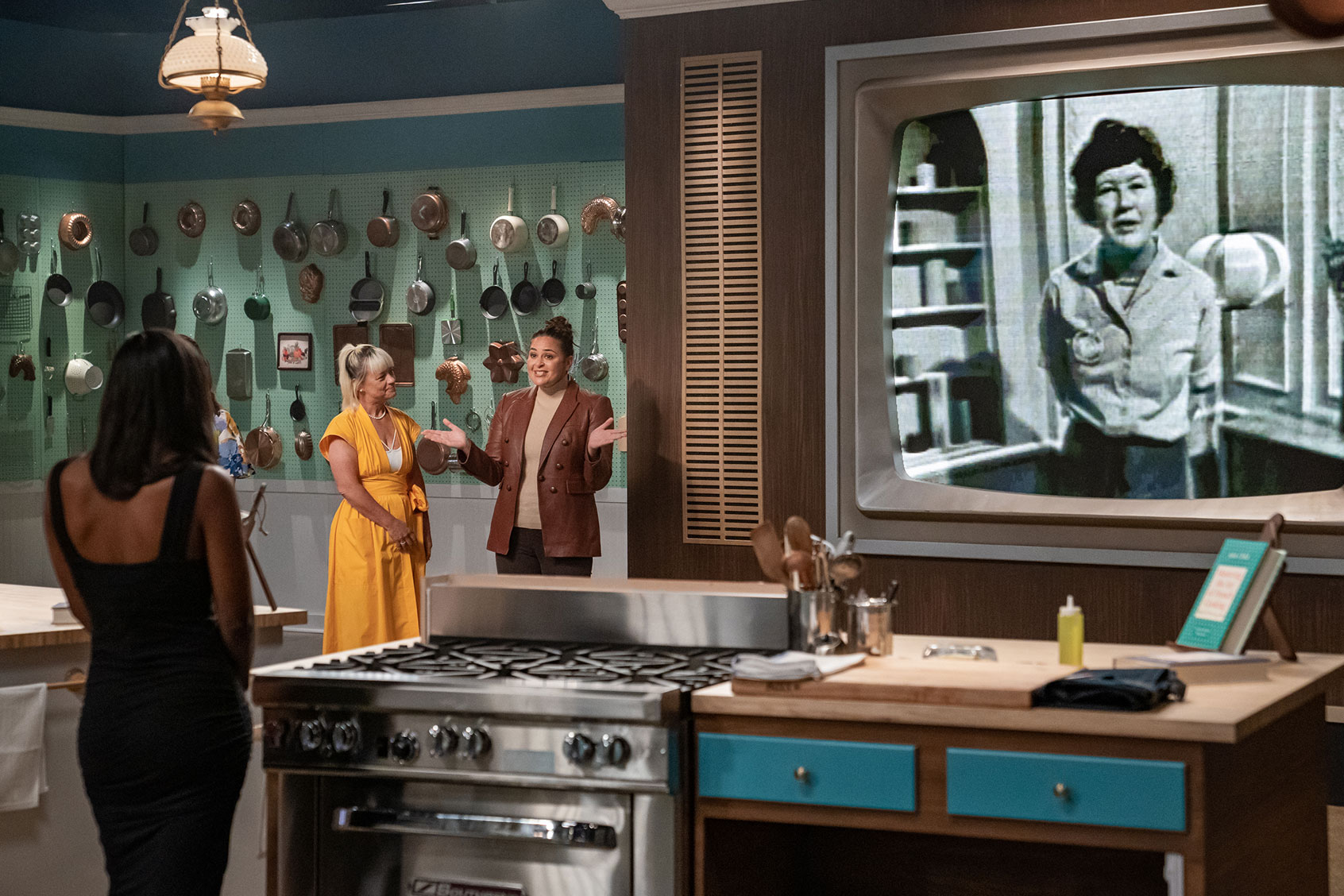 Before Julia Child ever demonstrated her “bean trick” for learning how to make omelets on TV, she wrote about it in “Mastering the Art of French Cooking.”

“A simple-minded but perfect way to master the movement is to practice outdoors with half a cupful of dried beans.”

I have to admit it was a genius gimmick for TV (though filming me trying to do it on Jackson Avenue in the early aughts might have come close).

And so we are led into “Julia on TV” week on “The Julia Child Challenge” with a montage of Julia’s various mistakes and adjustments while filming. But I have a question: Aren’t all the weeks about Julia on TV? Isn’t that the whole point of the competition?

The guest judges are Sherry Yard and Stephanie Boswell, both pastry chefs, so I suspect I can guess a thing or two about the second challenge.

Meanwhile, the first challenge is an omelet aka the first dish Julia ever made on TV. This moment is depicted in the HBO miniseries “Julia,”  which makes for an interesting double-feature with this show. (Sarah Lancashire is terrific!)

The judges discuss how tricky omelets are to master. For one thing, you don’t want any color on it, and the texture inside has to be custardy — not too runny, not too dry. It’s very much a goldilocks situation. Omelets are hard, man!

“Actually, they’re all wearing the same clothes. Did they all churn these out in one day? That sounds exhausting.”

First, something has been bothering me. Why is Jaíne wearing the same (adorable) crawdad dress in every interview? Actually, they’re all wearing the same clothes. Did they all churn these out in one day? That sounds exhausting.

Simple is the name of the game. Dustin adds leeks and Gruyère to his omelet, which he drapes with saffron hollandaise. Sherry twice questions his choice to top his egg omelet with hollandaise. “Egg on egg?”

The omelets are perfectly cooked. Head judge Antonia Lofaso (“Top Chef“) likes his trick of grating the Gruyère on the microplane so it melts seamlessly into the omelet. “To me, that is brilliant cooking.”

Bill turns out a simple omelet with a take on Coquilles St.-Jacques (scallops in wine sauce) to top it, though he seems to be using shrimp instead of scallops. It sounds great, but something is wrong. The sauce tastes weirdly sweet, and he can’t figure out why.

“The mystery is solved . . . He definitely accidentally grabbed the sweet vermouth instead of the dry.”

The mystery is solved by Antonia during the judging process. Bill definitely accidentally grabbed the sweet vermouth instead of the dry. (This is why you don’t keep sweet vermouth in the house.) He’s doctored it up, however, and Stephanie actually likes the sweet! His omelets are also perfect.

Jaíne accompanies her simple omelet with blue cheese, salad and prosciutto. Antonia thinks the blue cheese is a little overwhelming, while Stephanie thinks it was just slightly overdone.

The second challenge is French desserts. To see what dessert they’ll be drawing inspiration from, the challengers each pick a remote, which makes me roll my eyes . . . but wait! Wait, this is kind of cute! Each remote has a number on it that corresponds to an episode of “The French Chef.”

Britt clicks and gets Apple Charlotte. She does a fist pump. Apparently, apples are her favorite fruit to bake with . . . which OK! Sure!

Jaíne gets chocolate cake. I have the feeling she has this one in the bag. 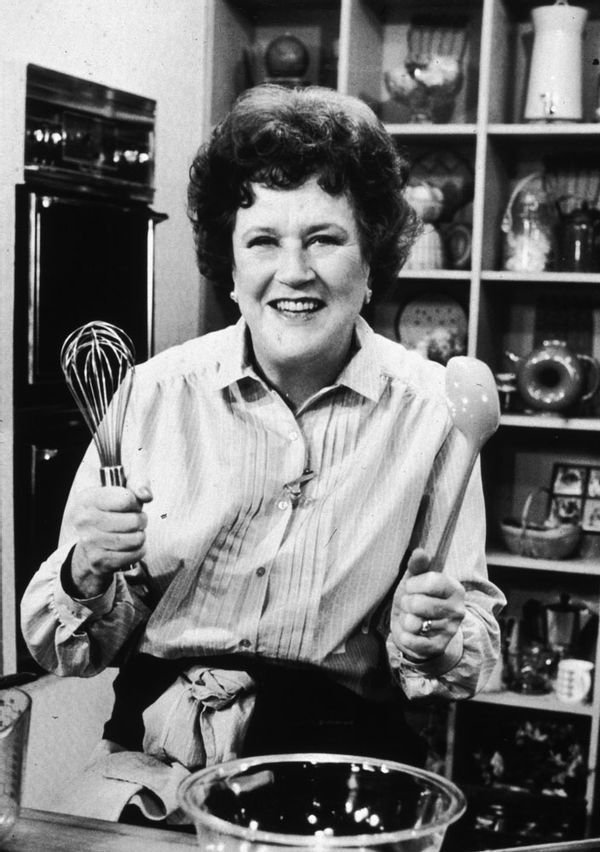 American chef Julia Child stands in front of a countertop, holding a whisk and a ladle by a mixing bowl, possibly on the set of her TV series, “The French Chef.” (New York Times Co./Getty Images)

Bill gets a meringue cake thingy that makes me break out in a cold sweat simply from looking at it. And, indeed, he seems to be dreading this task. “Not only have I never made a meringue cake, I’ve never even tasted one, so I have no reference for this.”

Jaíne makes (among many other things) something called briadeiro, a Brazilian bite-sized fudge candy, to top her chocolate coffee trifle. It looks magnificent coming out to the table. Everyone deems it a great success, though Sherry starts her critique with “it’s shockingly un-sweet” and “the oxymoron of desserts.” It remains unclear for several seconds if these are compliments.

Bill brings out a meringue tartlet with passion fruit curd and a blueberry compote, which looks both adorable and correct despite his worry. As usual with Bill, everything comes off well in the end.

Britt has brioche pudding roundlets (whatever those are). I had my doubts about her ability to make a bread pudding in the time allotted — and it turns out I was right. Soaking the bread longer would have improved the texture. There are also issues with the cook on her apples. Uh oh, Britt! Her flavors are generally good, but time keeps biting her in the ass.

Dustin makes a strawberry tart napoleon. They look lovely — even after Stephanie warned him about his pastry being overdone. Everyone is coming (gently!) down on him for not having enough patisserie cream. It’s a rare stumble for our Dustin.

“Despite my nitpicks about the silly stretches this show makes to create weekly themes, it’s a great use of the Julia Child footage.”

In the end, it’s down to three — and next week’s finale. Bill comes in first, with Jaíne in second. Personally, I would have switched those two rankings — but I’m not mad about it. Britt is, unsurprisingly, out.

Despite my nitpicks about the silly stretches this show makes to create weekly themes, it’s a great use of the Julia Child footage available from the archives. Is it treacly? Sure! Contrived? Yeah. But, by now, I actually believe these amateur cooks have come to love Julia — if they didn’t already.

“The Julia Child Challenge” airs Mondays at 9pm EST/8pm CST on The Food Network; it is also available to stream on discovery+.

Worried about the “unprecedented” sriracha shortage? It’s almost too easy to make your own

Johnny Flynn on making the crime musical “The Score,” in which characters perform songs he wrote

Why haven’t we been storing canned food like this all along?