There is uncertainty in the Lagos State chapter of the All Progressives Congress (APC) over the second term bid of Governor Babajide Sanwo-Olu of Lagos State, as his political godfather, Bola Tinubu, appears to be considering “other options” for the 2023 governorship race.

Findings by Daily Trust revealed that contrary to reports that Sanwo-Olu had been endorsed by the Governor’s Advisory Council (GAC), the highest decision making organ of the APC, the governor is still awaiting its nod.

This is why the governor has not made his intention known to seek a second term, it was learnt, amidst fears in some quarters that he might be denied.

SaharaReporters had on March 19 reported that there was anxiety in Sanwo-Olu’s camp as Tinubu, also National Leader of the All Progressives Congress, appears not to be interested in his (Sanwo-Olu’s) second term bid.

SaharaReporters had learnt that Sanwo-Olu and his camp are presently worried about Tinubu’s indifference and much more after the state government is “heavily funding” Tinubu’s 2023 presidential ambition.

“Tinubu is yet to endorse Jide Sanwo-Olu as governorship candidate. This is causing panic. The governor is worried. He is telling people that despite funding Tinubu’s candidacy, he’s yet to hear from him.

“N1.7billion monthly is siphoned through the Office of the Speaker (of the State House of Assembly) alone to fund Tinubu’s campaign. The EFCC has transferred all the officers handling the Speaker’s case,” a top source had said.

Meanwhile, on Monday, Daily Trust learnt that the GAC is yet to meet on the second term of Sanwo-Olu and until it takes a final decision on the matter, the fate of Sanwo-Olu is unclear.

There has been widespread speculation that Sanwo-Olu might not get a second term ticket paving way for the opposition Peoples Democratic Party (PDP) to offer its ticket to him.

The APC immediately kicked and rejected what it called a Greek gift, saying the platform that offered him the ticket in 2019 is still very much available.

The speculation followed a report alleging that another member of the ruling oligarchy in the state might have been anointed.

But findings indicated that there is uncertainty in Lagos over the fate of Sanwo-Olu.

“I can tell you this is what is responsible for the lull in the party. Aspirants have been coming out for other positions but not the governorship. Aspirants are reading the lips of the GAC before indicating interest, especially in the governorship. Definitely, people will still come out to contest the position. It is not automatic,” the source said.

A prominent GAC member who spoke on Monday confirmed that they are yet to meet on the issue of the second term for Sanwo-Olu.

“I am surprised to read a report that GAC has endorsed Sanwo-Olu for a second term. There is absolutely nothing like that. GAC has not met for some time now on the issue of the second term,” he said on the condition of anonymity. 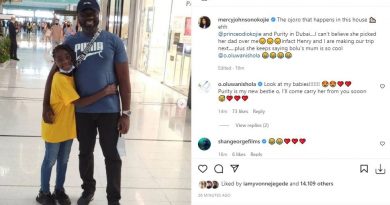 The U.S. truly is an “exceptional nation” — in its devastating impact on the planet