The member representing Ndokwa federal constituency of Delta State in the House of Representatives, Ossai Nicholas Ossai, has been facing criticism for empowering delegates with pesticides and sprayers.

This comes ahead of the Peoples Democratic Party’s (PDP) House of Representatives primaries.

The federal lawmaker, who is seeking reelection had last weekend personally distributed pesticides and 16-litre knapsack sprayers each to empower some constituents believed to be PDP delegates ahead of the forthcoming primaries,

The event, SaharaReporters gathered took place shortly after Ossai declared for reelection, calling for support from constituents in the 2023 general elections.

The empowerment has attracted public criticism from constituents and the general public, some of whom have described the federal lawmaker as “wicked and heartless”.

A former councillor in the area, who spoke on condition of anonymity, condemned the use of pesticides and sprayers as an empowerment project.

He said the federal lawmaker has nothing to offer, adding that in 2023, he will be shown the way out from the National Assembly.

He said, “Apart from amassing wealth and self-centeredness, Ossai has nothing to offer us. He has become so rich overnight with our common resources. Ossai is seeking reelection for his third tenure and has nothing to write home about as far as the constituency is concerned.

“Just watch, he will be shown the way out from the National Assembly come 2023. He can go ahead to bribe delegates, councillors and selected constituents with farm insecticide and sprayers but the people will speak at the appropriate time in 2023.”

A cross-section of constituents who spoke with SaharaReporters scored the federal lawmaker low in his performance at the National Assembly for almost 10 years.

According to them, the empowerment of PDP delegates with farm insecticide and sprayers will not save Ossai. They said in 2023, the people shall speak with one voice to replace him.

SaharaReporters in February reported how a councillor in Sokoto State donated two plastic mats to Sadada community in the Kebbe Local Government Area of the state.

The councillor, whose name could not be verified as of the time of filing the report, also took pictures with the beneficiaries while making the donations.

Such ridiculous donations by Nigerian politicians are not new but the recent ones only show the practice is being taken to new embarrassing heights.

The usual items had included tricycles, motorcycles, and grinding machines, but water sachets and shoe-shining starter kits have also been donated by politicians.

SaharaReporters had reported how donkeys were given out in Kano and cassava stems in Anambra as economic empowerment by government representatives who enjoy all the pecks of office, and in many cases, funds corruptly acquired, all at the expense of taxpayers.

SaharaReporters had reported how an aide to the Benue State governor, Samuel Ortom, once distributed wheelbarrows with the inscription, “Gov Ortom for You,” arguing that the beneficiaries would use the wheelbarrows to run errands and hawk.

Later the wheelbarrow empowerment resurfaced in Taraba State as a member of the House of Representatives, Maigari Bello-Kasimu, representing Jalingo/Yorro/Zing federal constituency, distributed wheelbarrows to empower some members of his constituency.

“All of them used to hire wheelbarrows and push to earn their living, but now they have the opportunity of owning their wheelbarrows,” the spokesperson for the lawmaker, Saidu Na-Anabi, had said during the presentation.

Na-Anabi’s speech probably inspired the late caretaker chairperson of Nsukka Local Government Area in Enugu State, Chinwe Ugwu, to give wheelbarrows to youths in the area as economic empowerment.

“These are poor people who cannot afford to buy wheelbarrows but had to hire for between N200 and N300 per day,” Ugwu had said in response to critics.

While Kano governor was beating his chest for such an “extraordinary” achievement, the late Commissioner for Education in Katsina State, Halimatu Idris, outdid him by handing goats to female students at Government Girls Arabic Secondary School, Dutsinma.

The goats were reportedly given to female students in 20 secondary schools who were expected to return the nanny goats to the state government after a year.

Then came the Commissioner for Education in Borno State, Usman Jaha, who gave shoe-shining kits, baskets, yams and bags of oranges to his constituents in Gwoza as economic empowerment. The shoe-polishing instruments were given to men, while the baskets and fruits were used to empower the women.

As more Nigerians face economic hardship and wallow in poverty, largely occasioned by corruption, politicians further insult the populace with the donation of such ridiculous and bizarre items as so-called economic empowerment or welfare packages. 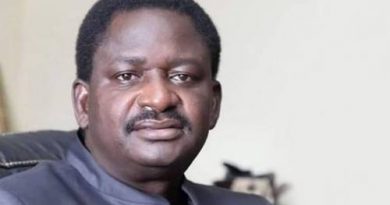