The National Drug Law Enforcement Agency (NDLEA) has seized at least 9.5 million tablets of Tramadol and Exol 5 worth over N5 billion in Lagos and other parts of the country.

The NDLEA Director of Media, and Advocacy, Mr. Femi Babafemi, who disclosed this in a statement on Sunday in Abuja, said the substances were seized at the Murtala Muhammed International Airport, Lagos, the Federal Capital Territory, (FCT) and Edo State.

He said the operation was carried out in collaboration with the Nigerian Customs Service (NCS).

“In Abuja, 228,740 tablets and capsules of Tramadol and Exol 5 were intercepted on Friday, April 1, in the Abaji area of the FCT. The truck conveying the drugs was loaded in Lagos heading to Kano.

“Though the truck driver escaped into the bush during the search of the vehicle, two of his assistants – Usman Abdulmumini (23) and Aminu Ahmad (22).

“ Three-drug joints were also raided at Wire road, Benin City, and Uromi town in Esan Central Local Government Area of Edo where 188 pinches of cocaine and heroin were recovered with five suspects arrested.

“One Harrison Odion, a patent medicine dealer, was arrested with 70 bottles of codeine based cough syrup in another raid in Okada town, Edo State.

As a media platform, we hold leadership accountable and will not trade the right to press freedom and free speech for a piece of cake.

If you like what we do, and are ready to uphold solutions journalism, kindly donate to the Ripples Nigeria cause.

Your support would help to ensure that citizens and institutions continue to have free access to credible and reliable information for societal development. 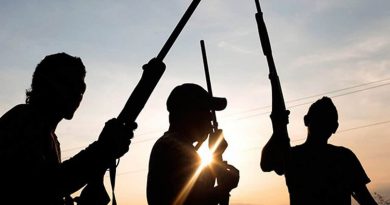 POLITICAL PARTY LOYALTY, ITS COST ON PATRIOTISM AND GOOD GOVERNANCE.

1. Political Party
2. Party Loyalty
3. Patriotism
4. How being loyal to a Political party can kill the spirit of patriotism and Good Governance.

1. POLITICAL PARTY: A Political Party is an organized group of people with a particular purpose or similar ideas and are in the position to coordinates candidates to compete in a particular elections so as to promote their ideology and policy goals.

2. POLITICAL PARTY LOYALTY: This is when one is faithful to a particular and ready to go the direction of the Party.
I will like to classify this into 2 categories.

Party Loyalty as Brand: This means that the loyalist is faithful to the party because it stands as a brand and in most cases is ready to abandon the brand when it's not meeting the needs it was created to meet.
In this case, one can change their mind when the party is going out of track or representing a Candidate with questionable character.

The other one would be what I call

Blind Loyalty: In this case, the party member is blind to the reality on ground and ready to defend the party even when his or her instinct is against the happenings.

Generally, Political Party Loyalty Is Not Patriotic or wise in any Way because it makes one lazy and makes the loyalist give up their most valued ability to think.

Political blind loyalty today in our politics at both the national and state levels is birthed with a high level of greed. Party members are more concerned with what they will gain than what the Nation will benefit. They are partisan.

* Partisan is a firm adherent to a party, faction, cause, or person; especially: one exhibiting blind, prejudiced, and unreasoning allegiance*

3. Patriotism means " the quality of being patriotic; devotion to and vigorous support for one's country.
Patriotism comes with a high level of unquestionable integrity, an in-depth beliefs in one country and the ability to defend one's country over personal needs.

This means that Citizens will always put the country first before themselves.

For example, the "America First" slogan is what brought America to her present state and not Political Party Loyalty.

4. How being loyal to a Political party can kill the spirit of patriotism and Good Governance:

Party loyalty makes members bypass the use of the brain by suspending their judgment in favor of the party's judgment thereby ceding their intellectual autonomy to the party.
Blind political Party loyalty is not a virtue but foolishness.

When you see yourself praising a failure just because he belongs to your party, then your loyalty is blind.

The Political Party leadership was formed by Democracy and when you can no longer talk or suggest what should be done but rather follow what has been said, then you have become unpatriotic and ready to follow same party to destroy your own country.

When it is all about "My Party" it will be difficult for party members to question the leadership of the party or elected Candidate even when they know that they have done wrong. But in the real sense, there is nothing wrong with questioning what a politician does even if it was someone we voted for. No elected official should be given a free pass once he or she is in office.
People know this of course. But the blind loyalty shown in our politics today is insane and has become very frightening.

But we must know that, in times of crisis, patriotism unites us. We put our political differences aside to help our country. This should also be seen in case of underdevelopment or bad governance. we must put our party aside and unite to speak truth to power as patriotic citizens.

I do not believe that good citizenship involves party loyalty. Good citizens are expected to think for themselves.

I will like to close this lecture with a message from HOWARD LAVINE called.

This theory state that, instead of having values and beliefs and policy instincts that determine which party or candidate one will support, the theory of “democratic inversion” suggests that more and more voters have turned over what you might call their values and priorities calculator to their party.

The idea of self-esteem is related to the idea that my group is right. Social psychologists call this ‘positive distinctiveness.’ My group is different and better than other groups. So what’s good for my group benefits me, even if doesn’t benefit me personally.”

For me, this is blindness, or call it foolishness and not loyalty.

1.If my party is supporting it, then it's right can only be a statement of laziness and Politically Blind Loyalist.
--+Comr Ezomkn Ak

2. Party Loyalty is an old concept that can bankrupt Development
---Comr Ezomon Ak

4. When your values, beliefs and policy instincts cannot determine what you say to your elective officers, you become intellectually foolish.
--- Comr Ezomon Ak

5. When your self-esteem is
Determined by your party loyalty and party direction, then, you don't have direction
--- Comr Ezomon Ak

6. Being at peace with yourself is the best freedom. Comr Ehinomen Uagbor

7. Let’s think about us, our community, our economy, our future and speak truth to power. It is to our advantage and growth generally!
--- Princess Ehima Elema

8. Politics It shouldn’t be business as usual else we become like the career politicians with no empathy.
--- Princess Ehima Elema

9. I actually think not being blindly loyal to a political party is quiet difficult for an average Nigerian.It takes great maturity of the mind to know that placing *Nigeria or Edo state first* should be the best thing to do.
---Joanna Ede Oshiokomoh

10. Truth is what it is. Even if you are not going to gain something physical, you will always be at peace with yourself.---Comr Ezomon Ak

11. Patriotism can only strive when we place our national interest over our personal gains and benefits. Comr Iyobosa ... See MoreSee Less

Topic: THE MAN WITH AGBAZILO DEVELOPMENT AS HIS PRIORITY

A great leader per excellent. Prince Odi Okojie deserve and earned it.

Good evening all, Without wasting more time, let us go straight to the first Question.

Question 1: Agbazilo is a very strategic place in the heart of Esan Land and having the best representations in the coming elections will be the best thing that will happen to her. Looking at Antecedence, do you think there is any other representative that is more qualify than Prince Odi Okojie?

Prince Odi Okojie love his people wholeheartedly, he stand for Truth and equality, he's a man that goes extra mile to get the best for his people in unity he stand a man with genuine love

The right man for the job, my vote is for him

With Prince Odi Okojie agbazilo is in safe hands 🙏

Question 2. 2023 Election as we all can see is taking a new shape and a different trend that we are not used to because, many have decided to Vote individual and not party. This is due to the fact that we have individuals from different party that has distinguished themselves in so many ways. Do you think this new trend favour Prince Odi Okojie?

Ezomon Ak Prince Odi Okojie's representation is far beyond Agbazilo, Esan and Edo state. Nigeria is in dare need of quality Representation. In need of leaders with Verse knowledge in all sphere of life. Prince Odi is the now product. A breed of verse knowledge and track record of continues progress in different aspect of life endeavors. Is kind is what Nigeria need at this critical time of our nation history.

Question 3. With the recent happenings in the state were some person have decided to betray their own people, do you think it will be nice to support such persons because of Party affiliations and allow the mandate of a good man to suffer?

Prince Odi Okojie Has been concerned about the Common man in the street, He's the Hope of the common man in Agbazilo, I think at this time we should all ignore party sentiment and embrace someone That mean well for our people. Prince remain the future of our people

Ezomon Ak Prince is the future of ESAN Politics He has the magic stick that command many followers,Odi has what it takes to lead, I've worked with thousand of politicians prince is the best, he's compassionate, he's straight forward, Prince is Kind,this are the 3 Characteristics we want In a leader,For me anywhere prince go I follow

No Man has been shown this kind of Support and Love like Prince Odi Okojie is getting, Agbazilo is about to Experience the Best there is

Awuf ooo, make you find one for me na make I use the items for the marriage

Rosdiana Ciaravolo The temperatures have dropped, which means it’s officially time to shake up your skincare routine. Colder temperatures mean

Are some stars and celebrity cases simply too famous to ensure that justice will be served?