Vice President Yemi Osinbajo has paid a visit to Kaduna State to condole with victims of the train attack.

Terrorists had earlier attacked the Nigerian Railway Corporation train from Abuja to Kaduna on Monday evening and abducted some of the stranded passengers.

Hours after the attack, Osinbajo was received at Kaduna Airport by the State Governor, Nasir El-Rufai.

He is expected to visit victims of the attacks at 44 Nigerian Army Reference hospital and Saint Gerald’s Catholic hospital both in the Kaduna state capital.

SaharaReporters obtained victims’ accounts which confirmed that some other persons were shot dead by the rampaging terrorists who operated for hours due to the absence of the Nigerian military and other security agencies.

It was also gathered that eight passengers have now been confirmed dead as the search-and-rescue mission continues in the area.

SaharaReporters earlier reported that a former Deputy Governor of Zamfara State, Malam Ibrahim Wakkala, was among the Abuja-Kaduna train passengers who was shot by terrorists on Monday evening.

Sources also confirmed to SaharaReporters that out of 15 patients brought to St. Gerald’s Catholic Hospital in Kaduna, two had been confirmed dead, including a lady medical doctor with the hospital, Chinelo Megafu.

SaharaReporters on Monday night also reported that Muhammad Amin Mahmood, an aspirant in the just-concluded National Convention of the All Progressives Congress (APC) for the Northwest Zonal Youth Leadership, was shot during the attack on Monday. 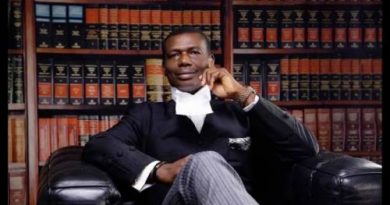 The Conspiracy In Sokoto, By Ebun-Olu Adegboruwa (SAN)