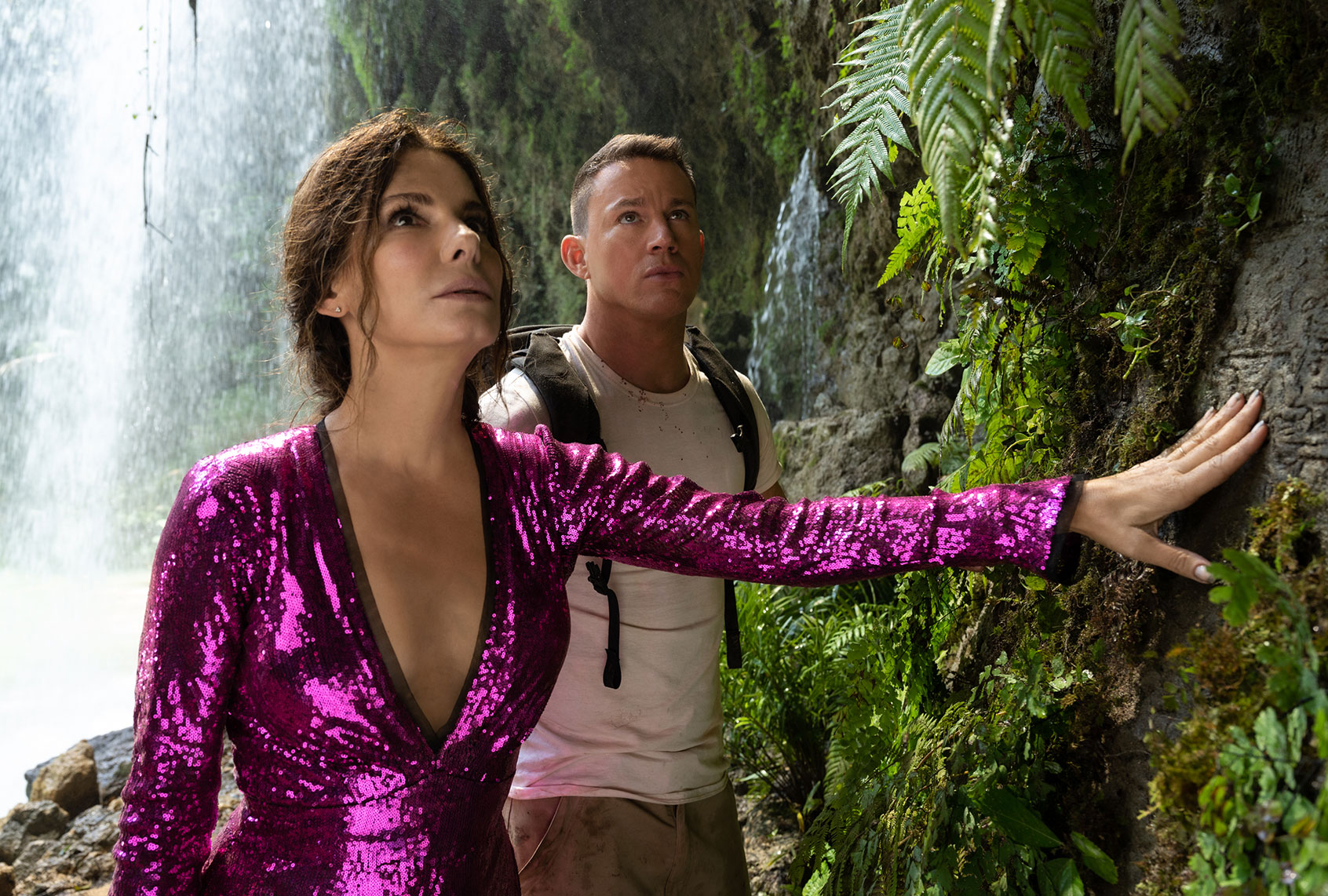 As romance novelist Loretta Sage in “The Lost City,” Sandra Bullock gets to crack wise, do physical comedy (tied to a chair in one scene, getting into a hammock in another) and debate not just the colloquialism of “here” for “catch,” but also read logographics and spout Latin. And she does most of this wearing a body-hugging glittery purple onesie. In other words, in her genial new film, Bullock returns to the rom-com genre that helped make her a star. (This is not to say that she should only stick to comedy; she deserved the awards she received for “The Blind Side” and “Gravity,” even if she tried — and suffered — nobly in “The Unforgivable.”)

Bullock is paired here with Channing Tatum as Alan, a hunky cover model who provides visual inspiration for Loretta’s novel character Dash. Alan is a sweet, dim bulb who wants to be Dash, and Tatum’s entrance at a book event where he performs a “Magic Mike” routine is amusing. But to Loretta, Alan is annoying. While she is still recovering from losing her archaeologist husband and is blocked as a writer, she is even more dispirited that her fans show up to see Alan take his shirt off — or what is worse, to ask Loretta to take Alan’s shirt off. Moreover, her publisher, Beth (Da’Vine Joy Randolph), is unhappy that Loretta plans to kill off Dash and stop writing.

RELATED: Sandra Bullock says she’s still “embarrassed” by “Speed 2,” but is that really her worst film?

But then Loretta gets kidnapped by Abigail Fairfax (Daniel Radcliffe), a very rich man who wants Loretta to decipher the hieroglyphic symbols that should lead to the location of the prized Crown of Fire, a rumored treasure buried deep in the island with the active volcano he bought. Alan and Beth contact Jack Trainer (Brad Pitt), who can extract Loretta, and Alan, like an irritating younger brother, begs to tag along. (He can’t wait in the car because he locked himself out). 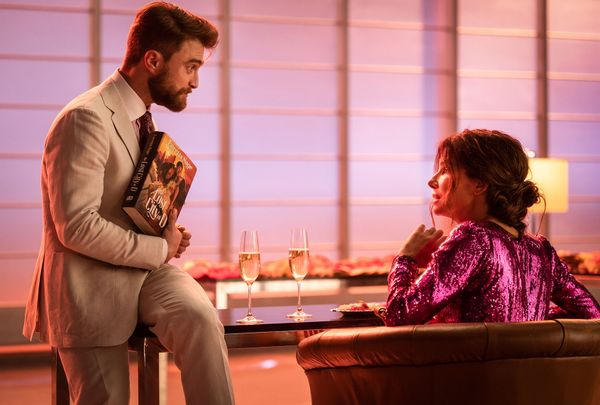 “The Lost City” has great fun with its setup. Bullock performs slapstick comedy while hanging out of a car and deadpans about why the body of water they are wading through is warm. It is all charming old-school humor, and it works. And Pitt is hilarious climbing across a tree to dispatch bad guys with noticeable aplomb. Tatum’s eager-to-please nature is both awkward and endearing, but he really hits his stride when Alan and Loretta find themselves trying to make their way through the jungle without a cell phone or a clue.

Cue the scene where Loretta removes leeches from Alan’s nude caboose, or he helps her scale up a cliffside by putting his head between her legs and pushing as she complains that her skills are “sitting and thinking and eating,” not rock climbing. And there is some witty banter as the novelist soothes her cover model’s eczema and talks in purple prose about the ridges and contours of his body.

But as the action part of “The Lost City” ramps up, the film starts to drag. It is not that Abigail is a weak villain — he is — but give Radcliffe credit for playing him more gleeful than sinister, which is cute. But the film seems to stretch out the action for an unexciting chase scene and fight in and on top of a tank (that has a minibar)! It is fine to paint by numbers in a formulaic film and the leads are squarely in their goofy comfort zones, but the pleasure of the cinematic equivalent of a bag of potato chips is wanting more, and directors Aaron and Adam Nee serve up diminishing returns. 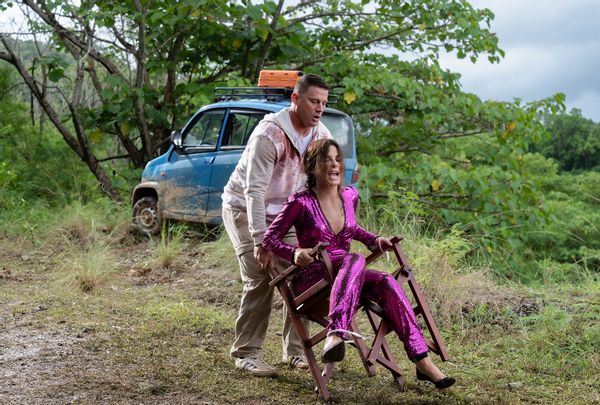 A mediocre subplot has Beth trying to locate Loretta and Alan and experiencing all kinds of frustration. Randolph is terrific, but her encounter with a wacky pilot (Oscar Nuñez) who loves his goat, should be funnier. And while it is nice to see an inclusive supporting cast that including Patti Harrison as Beth’s social media manager, these players are not really given much to do — Radcliffe included — and not enough of it is funny.

“The Lost City” coasts on the charms and sex appeal of its attractive leads, but it is best when Loretta and Alan are dancing, and weakest when they have a get-to-know-you dialogue which includes a groan-inducing line about not judging a book by its cover (model). While it is nice that the Nees’ film is a throwback to everything from “Romancing the Stone” to “Raiders of the Lost Ark,” it rarely, truly enthralls. It is just a pleasant diversion with some funny moments. (Pitt easily gets the most laughs even though he has the fewest scenes.)

Bullock and Tatum are game, and “The Lost City” is a crowd-pleaser, but it never quite delivers the classic screwball comedy it should (or wants to) be.

“The Lost City” is currently in theaters. Watch a trailer for it now, via YouTube. 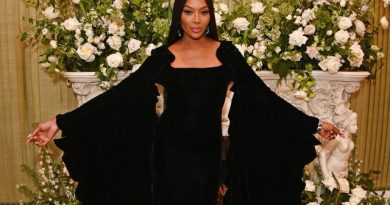