Xavi Hernandez is refusing to rule out a late run for the title and Gerard Pique proclaimed Barcelona are back after they hammered Real Madrid 4-0 in Sunday’s Clasico at the Santiago Bernabeu.

A Pierre-Emerick Aubameyang double and further goals from Ronald Araujo and Ferran Torres ended Barca’s six-game winless run against Madrid, dating back to 2019, and cut the gap on Carlo Ancelotti’s side to 12 points with a game in hand and 10 matches still to play.

Just minutes after full-time, defender Pique posted “We are back” on social media as Barca stretched their unbeaten streak in LaLiga to 13 games.

“Maybe we can say we’re back,” coach Xavi said in his post-game news conference when asked if he agreed with Pique’s message.

– Marcotti: Destruction of Madrid shows how far Barca have come
– Ancelotti on El Clasico thrashing: ‘It was my fault’
– Don’t have ESPN? Get instant access

“This is the path to follow. This is the way we want to play. It was a complete performance. We were much better than Madrid. We played almost as the home team at their ground.

“We could easily have scored five or six. We changed the negative dynamic of losing the last few Clasicos. It’s a day to enjoy, not only as a Barca manager, but also a fan.”

Barca were ninth in LaLiga when Xavi took over in November but have since risen to third. They are now just three points behind Sevilla in second, who they face after the March international break, but hauling in Madrid has proven tougher.

“I don’t know if we can win the title, we can’t rule out anything,” Xavi added when asked if his side can now aspire to win the league this season. “Maybe we’re a bit late, but this is a very big win for us.

“We’ve won tonight — and we also have the better head-to-head record [against Madrid, which decides the title if both teams finish level on points] — but it is going to be very difficult.

“Madrid have only lost three league games. They have to lose three more. We must keep working hard. The first objective is to qualify for the Champions League.”

Midfielder Sergio Busquets added: “If we have just a small chance to make a run for the title, we will fight until the end. It’s very difficult, but in football anything can happen. We are Barca.”

Barca’s return to form under Xavi has been remarkable. They have lost just two of their last 20 games in all competitions, and both of those defeats came after extra-time, while the team has recovered the playing style associated with Barca teams of the past.

In the second half, despite leading by four goals, Xavi regularly appeared exasperated on the touchline on the rare occasions when his players gave away the ball.

“You have to run, you have to help the full-backs, you have to press,” Xavi said. “It was 4-0 but in another game it could be 1-0 and losing the ball could cost us. A game of football lasts 90 minutes.

“I get really angry when we lose the ball. You can lose ball in the final third, but not in your own half. That’s why [I was angry]. If you drop the demands, you don’t get results.”

Aubameyang opened the scoring in the 29th minute after good work from Ousmane Dembele and Araujo headed in the second from a corner two minutes later.

Torres added the third in the 47th minute before turning creator to set up Aubameyang’s second goal, his ninth in 11 games since joining on a free transfer from Arsenal in January, just four minutes later.

“It was a special night,” Aubameyang told reporters. “This isn’t an easy place to come and we have won. I am really happy with my goals. I was desperate to do well [at Barca], as I am doing, and it’s easier when you have a team like this.”

Barca ended the game with 10 shots on target, with Madrid goalkeeper Thibaut Courtois making some fine saves to keep the score down, while Aubameyang missed the chance to complete his hat-trick by sliding the ball wide at the far post.

Xavi’s side now have a two-week break until their next game, when they host Sevilla at Camp Nou in LaLiga on April 3. 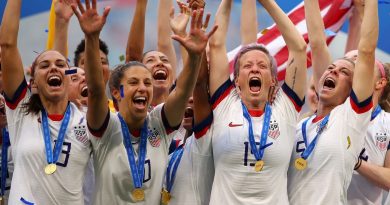