Francis Onyema, a 34-year-old graduate from Delta state, has declared his interest to contest the 2023 governorship election in the state.

Onyema, who hails from Ezionum in the Ukwuani Local Government Area of the state, announced his governorship ambition during a recent briefing held in an empty hall.

The graduate of political science said his decision was based on the “undeserving circumstances” residents of the state have found themselves in the last two decades.

He criticised successive administrations in the state for not addressing the challenges confronting residents holistically.

Onyema also took a swipe at some initiatives of the Ifeanyi Okowa-led administration, including the N17 billion state secretariat built by his government.

“A few years ago, I never considered vying for any political office, not if offered on a platter of gold. But seeing the undeserving circumstances we find ourselves in today, one we must change for good, it becomes incumbent on me to offer my services as governor in order to meet the aspirations of Deltans in 2023 and beyond, if elected,” he said.

“The actions and inactions of those entrusted with the management of our commonwealth over time have left us worse off; pro-poor policies that do not instigate real economic growth have become the fulcrum of successive public policies.

“Today, we’re perplexed by the spate of unemployment in the state. Youth empowerment schemes have become a mirage of job creation. I make bold to state that empowering the youth with Keke Napep, sewing or barbering kits, especially when such empowerment schemes do not guarantee global competitiveness, is tantamount to economic sabotage. Sadly, this is the norm with the leaders we have had in our beloved state for over two decades.

“For more than two decades, we have had leaders who plundered our scarce resources; leaders whose priorities have left us in the dark state of poverty and disarray. For the records, I will not be a governor that gives you streetlights whereas you are homeless or without electricity in your homes. I will not be a governor that beautifies the streets and overhead bridges with flowers whereas what you are craving for is greener pastures.

“I will not be a governor that spends N17 bn on building a State Secretariat whereas the same amount would be enough to revolutionize the real sector of our economy in order to create jobs for you and me. I will only be a governor driven by thoughtfulness and compassion to address the immediate needs of Deltans.”

Onyema said if elected, he would also address the problem of insecurity in the state. 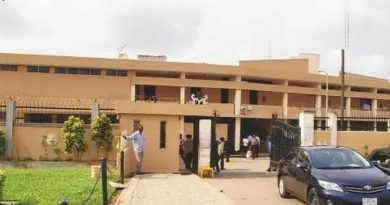