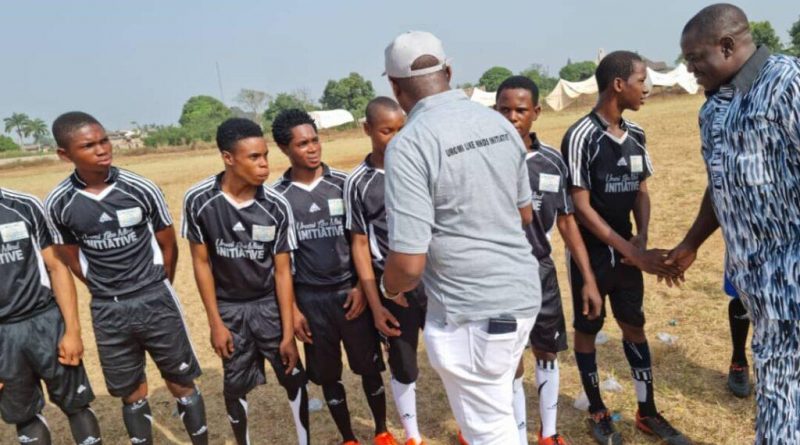 The year 2021 may have come and gone, but what will linger on for a long time to come are the memories of the carnival-like finals of the Uromi Like Minds Secondary School Football Finals and the honoring of deserving school teachers who had distinguished themselves within the last twenty-five years and still counting, held on the 26th of December, 2021.

The first game of the best losers, between Ebhoiyi and Obeidu secondary schools which began at 1.15 pm, in the main bowl of the LGA Council Sports arena, Ebhoiyi defeated Obeidu Secondary School 4-3 in a penalty shootout after the normal time scores were 1 apiece.

The goals were scored by Ikekhwa Dennis and Okoduwa George of Ebhoiyi and Obeidu secondary schools respectively.

The final proper saw a popular private school in Uromi, Buddie Group of schools, pipped the star-studded Agba grammar school to take home the inaugural gold cup against all odds. The game was watched by many sons and daughters of Uromi who went to the commercial town for the yuletide celebration.

A first-half goal scored by Iyoha Friday of Buddie Group of Schools was all that one of the pioneering private schools in Uromi needed to defeat Agba Grammar School to win the inaugural edition of the Uromi Like Minds Initiative Secondary Schools Football Tournament, which saw Azeez Ugbodaga of BGS winning the Tournament`s MVP award.

The top scorers’ award went to Iyoha Godspower of Ebhoiyi secondary school with 4 goals, while Ugbodaga Miracle of BGS was crowned the best goalkeeper of the championship.

The high point of the fiesta was the awards of excellence given to about nine teachers who have served for about twenty-five years. During the award ceremony, the Executive Chairman of the Uromi Like Minds Initiative, Mr Sylvester Abumere Ekpen appreciated the teachers for their selfless services to the students and community at large and promised that the association would make it an annual event in Uromi.

While announcing the cash prizes for winners and other special awards to the participating schools, Ekpen encouraged them to use water they get well with their families and friends and also admonished the young players to continue to improve in their game and academic works as well.

He said: “They say ‘all work and no play makes Jack a dull boy’. We understand that for all-round development of the mind and body, a mix of academic and social activities are required

“The following prizes are available for grabs today:

“Let me quickly mention that all schools so far eliminated from this competition received a participation reward of between N10,000 and N15,000”, the chairman stated.

Mr Sylvester Ekpen appreciated members of the ULMI for their support and donations towards all the projects the organization embarked on successfully in Uromi since 2020 when it was established.

In his words: “Lastly, to the wonderful members of ULMI across to globe. You are the real VIPS. Thank you for your selflessness and determination to make a resounding statement through this body.

“We have recently considered and passed a budget for 2022 that is almost twice the 2021 budget. While that shows commitment on the part of existing members, it is also a clarion call on ALL and SUNDRY, who shares a similar vision with the association, to team up, join hands with ULMI and help give back to this society that formed us all”.