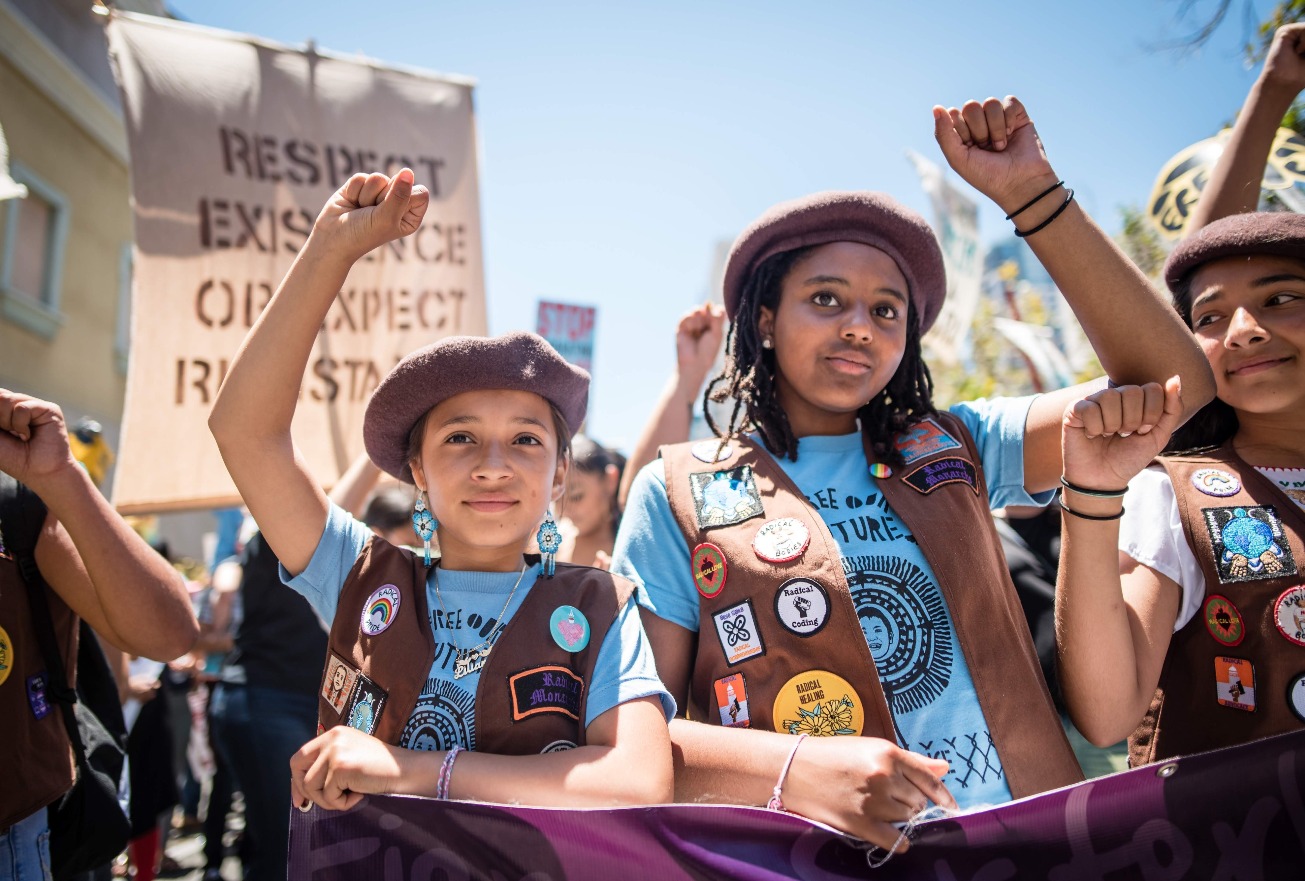 In 2015, a group of young girls wearing matching brown berets and uniforms, decorated with colorful badges, arrived at a Black Lives Matter protest in Oakland, CA. The group, aged from 8 to 10 years old, looked like your typical Girl Scout troop, but instead of selling cookies, they were calling for justice and reform.

“Young people are the ones to inherit this world, so who would be better to lead us on the path to liberation?” asked Martinez. In recent years, young activists — Greta Thunberg, Emma González, Malala Yousafzai, to name a few — have been at the forefront of movements and have demonstrated how influential youth are in advocacy work.

Unlike many other youth activists, who are often around high school age, the Monarchs are much younger, as the program is designed to start at 3rd to 5th grade. Martinez and her best friend-turned-cofounder, Marilyn Hollinquest, wanted to create a space where social and political conversations happened earlier on. This allows young girls of color to develop leadership and critical thinking tools that they can bring with them to high school and beyond.

Our education system offers little to no courses on social justice and advocacy, so the Radical Monarchs fills that void. “Unfortunately, social justice is an option . . . but it should be required,” Hollinquest said in the film, “We need to teach [children] social justice now like we teach them subjects.”

Yet, for the Monarchs, the goal is not simply learning about social issues or identities; Martinez maintains that “the goal is advocacy.” The courses are experiential — Monarchs go to City Council meetings, coordinate community cleanups, and visit the California State Capitol to speak with legislators.

But organizing curriculum and direct action for young minds is not easy. Martinez and Hollinquest carefully build lessons and activities that are effective yet not overwhelming to the Monarchs. One way they accomplish this is “lifting up glimpses of hope,” or highlighting wins in the issues being discussed.

A spotlight on the Monarchs’ radical work

PBS recently aired the POV documentary, “We Are The Radical Monarchs,” that follows the organization as they embark on the Radical Monarch movement. Throughout the film, we see the Monarchs supporting each other during hard times, celebrating one another, and helping each other learn. One of the last scenes in the film documents their trip to the State Capitol where the Monarchs met with women of color legislatures and discussed issues that they learned about.

The documentary also reveals the backlash that the Radical Monarchs have received. Sean Hannity claims the girls are being exploited for talking about racialized police violence. On “Fox & Friends,” commentator Crystal Wright said it would be better for the girls to learn leadership, friendship, sewing, and survival skills rather than “raising little racists.” Though sewing (fortunately) is not part of the Radical Monarch curriculum, friendship and leadership are key tenets in everything they do.

Criticism is not the only challenge the Radical Monarchs face in the film — like many community and non-profit organizations, they struggle with funding. Though they’re flooded with requests to start troops all over the world, it’s almost impossible to meet the demand with their current resources. For over three years, Hollinquest and Martinez worked on the Radical Monarchs “as a labor of love” all the while balancing full-time jobs. The organization received a multi-year NoVo social justice and education grant that allowed Hollinquest and Martinez to finally work on the Radical Monarchs full time. The grant runs out in 2020, and because of COVID, it has not been renewed.

Back in 2015 when filmmaker Linda Goldstein Knowlton saw the Monarchs marching for Black lives, she knew she wanted to document their work. “They’re basically being tapped on the shoulder to start a movement,” she told Salon. The film was a great opportunity for fundraising and support for the Radical Monarchs, but more importantly, Martinez emphasized that “it’s very rare that women of color’s stories are documented.”

“It’s not the most logical idea for a middle aged white woman to come in and tell a story about a community of color,” Knowlton remarked. Therefore, during their initial conversations on the film, they “talk[ed] about race, right off the bat.” Martinez made clear that she and Hollinquest are telling their own stories in the film, while Knowlton is documenting and using her resources as a white woman to uplift their voices.

“One of the most important things that white folks can do is leverage their privilege for people of color,” Martinez stated firmly. Knowlton added, “It’s not enough to be an ally . . . I want to be an accomplice.”

Since the film wrapped, Martinez and Hollinquest were able to hire a staff member. Now a mighty team of three, they have opened up another troop in the Bay Area and plan to open one in Los Angeles in the near future. They have continued to host virtual courses amidst COVID-19.

This year, the Radical Monarchs responded to the killings of George Floyd and Breonna Taylor by attending local rallies and organizing vigils that honor Black women and femmes that have been killed by state-sanctioned violence. Alumni of the program created a video geared towards young people on how to be a good ally to the Black community. Watch the video here.

An organization like the Radical Monarchs is rare. As we look to the future, we need to recognize the power of youth activism and invest in social justice education. Martinez concludes that if there is one thing to take away from the Radical Monarchs’ story, “it’s just how powerful and brilliant girls of color are.”

Stream the film “We Are The Radical Monarchs” for free through Aug. 19.

“I could’ve been a George Floyd yesterday”: Protester’s beating by Louisville police caught on tape

A thief with bravery yesterday stole mats from the Nima Police Station Mosque in Accra. Mosque mats are usually joined