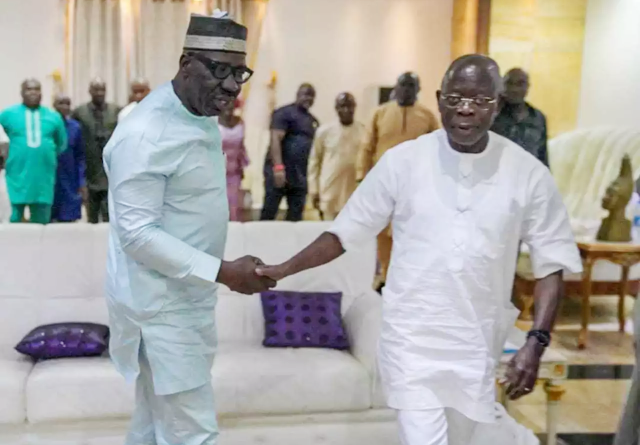 The crisis rocking Edo House of Assembly is not about to end as the 17 lawmakers opposed to Governor Godwin Obaseki vowed to sit next Wednesday.

They have the backing of the Attorney-General of the Federation (AGF), Abubakar Malami, who has asked the Inspector General of Police, IGP, Mohammed Adamu, to provide security for them.

Meanwhile, Malami came under attack yesterday, from the Peoples Democratic Party (PDP) which accused him of meddlesomeness in the Edo House crisis.

The AGF, acting on a petition by their lawyer, had, in a memo dated August 5, 2020, requested the Inspector General of Police to “kindly provide adequate security measures for the inauguration of the assembly members and the subsequent sittings at the Edo State House of Assembly.”

PDP said, yesterday, that there is “nothing in Sections 90, 91, 101 and 104 of the 1999 Constitution (as amended) cited by Malami that empowers him to go to the streets of our nation to assemble some clowns and declare them members-elect of any House of Assembly without any electoral mandate”.

Last week’s crisis in the House was the continuation of the logjam occasioned by the controversial inauguration of the legislature on June 17, 2019, which saw only 10 members being sworn-in by Obaseki.

Those who were not sworn-in were said to have been loyal to the immediate past governor of Edo, Comrade Adams Oshiomhole, with whom Obaseki had become estranged in the events leading to the 2019 general election.

But three lawmakers who had hitherto been on the side of the governor reportedly defected to the Oshiomhole group last week to swell its number to 17 out of the 24- member House.

Okiye said the action of the lawmakers attempting to take over the House was illegal, saying they were misguiding the AGF.

According to him, the AGF “did not have all the facts relevant to the matter, before it issued the advisory and directive to the Police to intervene in the affairs of the Edo State House of Assembly.”

The embattled Speaker, who shared details of pending and concluded litigation having a bearing on the Assembly, said, the Federal High Court sitting in Port Harcourt, with Suit no. FHC/PH/CS/159/19, gave a final judgment on September 19, 2019, and held that the Assembly was properly inaugurated on June 17, 2019, and that the House is sitting and carrying out its functions.”

He added that: “The Court also restrained the Governor of Edo State or any other person from issuing the second proclamation to restart the House.

They filed this suit to challenge the declaration of their seats vacant by the Edo State House of Assembly. The case is still pending in Federal High Court No. 4, Abuja.

“Suit No. B/81/OS/2019: Rt. Hon. Victor Edoror and 2 others vs Hon. Frank Okiye and others. In this suit, the claimants who were members-elect of the Edo State House of Assembly, who refused to take oath of office, challenged the proclamation made by the Governor of Edo State to hold the first sitting of the House on the 17th day of June 2019 and election of officers of the House. This suit is currently pending before Hon. Justice S. A. Omonua.

“From the foregoing, it is clear that all matters relating to the functioning or otherwise of the Edo State House of Assembly and/or its members are subjudice”, the Speaker added.

But Edoror said the issues in court were already being sorted out and could not be a hindrance to his assumption.

It was Hon Yekini Idiaye that went to court and he is here with us and I am the one that sued and I am here and since we have been inaugurated, the arrangement is on to withdraw my case and arrangements are in place too for Hon Yekini to withdraw his case, once that is done, no litigation in court.

But if they so wish that what we have done is not legal in their sight, they should go to court. We have been in court and we have been patient for one year and a half now.”

According to him, they had begun sitting and would sit again on Wednesday.

He said: “Business has started, we are ready for business because the legislative arm of government has suffered a great deal, and there has been no work since the beginning of this session. We have a lot of work to do, a lot of backlogs so we have started.”

However, while addressing newsmen, yesterday, in Abuja, PDP frowned on the directive to provide security for the Edoror group.

Its National Publicity Secretary, Kola Ologbodiyan, said: “Perhaps, the Attorney General should be made aware that the said individuals have been absent for 180 days during which they abandoned their mandate and for which their seats were declared vacant in line with the rules of the legislature and the laws of the federation.”

The party also took a swipe at the National Leader of All Progressives Congress, APC, Asiwaju Bola Tinubu, for likening Governor Obaseki to a dictator.

Tinubu had described Obaseki as a dictator following the controversy that engulfed the House earlier in the week which culminated in the swearing-in of some member-elect outside the council chamber.

Replying the former Lagos State governor, PDP said: “Our campaign notes that Asiwaju’s position also confirms allegations that some people in the APC are bitter with Governor Godwin Obaseki because he (Obaseki) refused to allow the APC cabal to have access to Edo treasury as well as his refusal to foist illegal levies and taxes on the people.

“It is however imperative for leaders like Asiwaju not to allow himself to be dragged into putting personal and group pecuniary and political interests over and above the collective interest and wellbeing of the people of Edo State.”

In a related development, the Oba of Benin, Oba Ewuare II, has said the palace has no preferred candidate, saying he is a father to all.

The monarch said this when the National Caretaker Committee Chairman of the party, Governor Mala Buni, led a delegation to his palace.

“There is nothing as powerful as prayers. As you go about your campaign, go about it peacefully and without bitterness. We remain non-partisan because of the laid down rules of our ancestors. We must be fathers to all.

Speaking during the official commencement of the party’s governorship campaign, Buni said: “We are here to win and not to fight.”

A statement by the Senior Special Assistant to the President on Media and Publicity, Mallam Garba Shehu, said the PDP lacked the moral justification to criticize the President’s action.

The statement reads:”The Peoples Democratic Party which has been struggling to clear its name from alleged deals with the underworld in Dubai and the United States has, to our surprise, found the voice to attack the anti-corruption war of the Muhammadu Buhari administration following the President’s endorsement of Pastor Osagie Ize-Iyamu, the All Progressives Congress, APC’s dashing candidate for the governorship election in Edo State.”

“Forgetting its history, the PDP said in a garrulous statement that “the President ought to have been aware that the candidate is standing trial for corruption,” and then went on a rant against the government’s war against corruption, alleging its failure.”