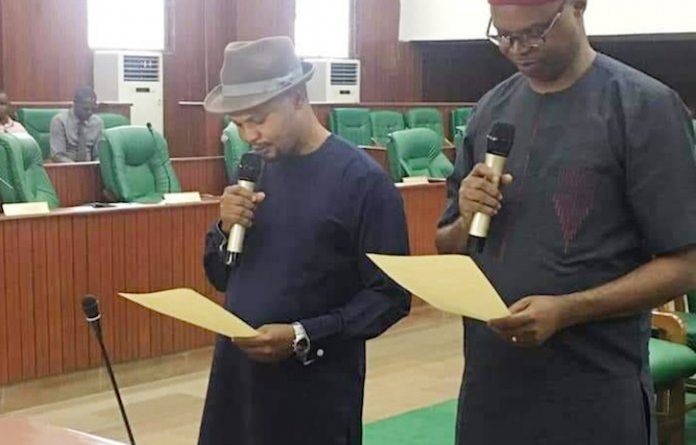 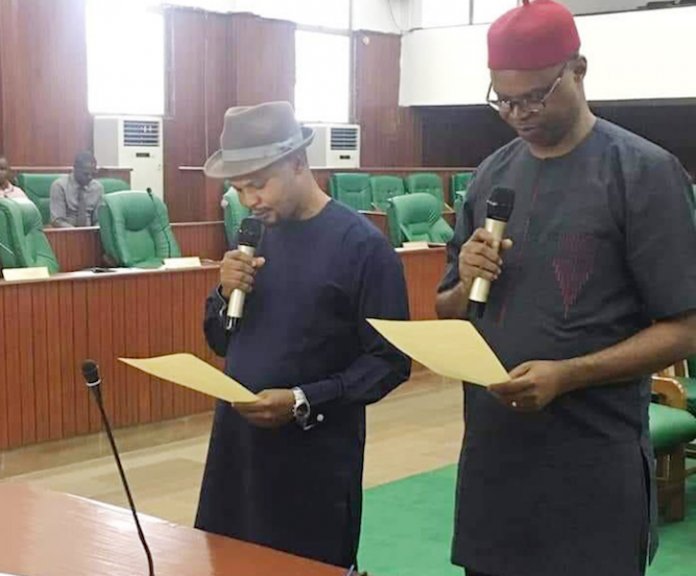 The Speaker of the Edo State House of Assembly, Hon. Frank Okiye, yesterday inaugurated two more members-elect, raising the number of lawmakers in the legislature, which is embroiled in a crisis following the war of attrition between All Progressives Congress (APC) National Chairman, Mr. Adams Oshiomhole, and the Governor, Mr. Godwin Obaseki, to 11.

The face-off between the governor and his predecessor, Oshiomhole, had delayed the inauguration of the state legislature until last Tuesday when Obaseki issued the proclamation and only nine of the 24 members-elect were present.

It was learnt that some APC leaders in the state had camped some 15 members-elect of the state House of Assembly in Abuja, including the two newly sworn in lawmakers.

Ojiezele and Okoduwa took the oath of office after completing due documentation and were formally inaugurated by Okiye.

During the sitting, the speaker said the inauguration was done after the members had completed documentation and to also prove to the world that they were not shielding anyone from accessing the House.

“After the inauguration of the House, the sitting was adjourned till July 17, but exigencies have necessitated the recall of members from their various committee assignments, reason being that it has become very necessary to demonstrate to the world that this House is not intended to shut out anybody.

“Last Friday, the Clerk of the House brought to my knowledge that two members-elect have completed their documentation. I immediately told them to come forward for inauguration, and issued a notice of this sitting where the members were inaugurated,” he later told journalists in Benin.

According to him, the move is to encourage members-elect who are foot-dragging to complete their documentation preparatory to their swearing-in.

“They should know that we were serious when we told them to complete their documentation and come forward to be sworn-in. As a matter of fact, this House has a responsibility to the people. We must hit the ground running. We have constituted our Principal Officers’ Council so that some decisions that need to be referred to the principal officers can now be done and the council can take decisions,” he added.

At the sitting, he said, the House ratified a letter from the Edo State chapter of the APC on the appointment of principal officers.

According to him, upon ratification, the House appointed Hon. Roland Asoro, representing Orhionmwon South Constituency, as House leader.

In “The Last of Us,” Nick Offerman and Murray Bartlett battle loneliness at the end of the world

Everything We Know About the Amy Winehouse Biopic Back to Black