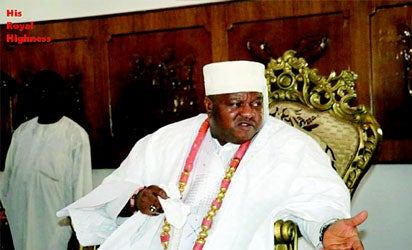 The Governor of Edo State, Mr. Godwin Obaseki, has explained the reasons for the reinstatement of the Ojuromi of Uromi, His Royal Highness, Anselm Aidenojie II, by the state government, who was deposed by the administration of Governor Adams Oshiomhole.

Obaseki disclosed that “Consequent upon his tendering of apology to the Edo State Government and a plea for leniency from well meaning citizens of Edo State, the Executive Council of the state, approved the reversal of his deposition and was reinstated as His Royal Highness Anslem Aidenojie II, the Ojuromi of Uromi.”

The governor said that “the people who pleaded for his reinstatement reported that the Ojuromi of Uromi had been sober and remorseful and we are happy that he has undertaken to eschew acts unbefitting of his royal status.”

Prominent sons and daughters of Edo had pleaded on the Ojuromi’s behalf, and begged for his reinstatement, as his conduct, mien and relations in public and private showed his readiness to work with the state government in manners worthy of the exalted Ojuromi throne.

It is said that the Oba of Benin, Oba Ewuare II also waded into the matter and pleaded for leniency for the Onojie.

News of the reinstatement was greeted with excitement in Uromi and other parts of the state, on Wednesday after the Edo State government announced the decision.

Recall that he was deposed on October 26, 2016 following the approval by the Edo State Executive Council that, amongst other things, the Royal father engaged in acts capable of breaching the peace in Uromi Community in Esan North East Local Government Area, contrary to section 130 and 131 of the Electoral Act 2010 as amended.

Gbenga Daniel: Atiku’s Media Aide — Not Atiku Himself — Was The One Who Listed Buhari’s Corrupt Allies

Watch and add your comment. I've nothing to add, beyond asking why are some Nigerians helping Buhari by remaining in apc? Greed?

The same people defended and campaigned for buhari to be president. If buhari still indicate interest for a third term, the same people will help him achieve that. We saw buhari from the beginning. We knew he cannot give anything because he had never given anything. We saw him as a tribal and religious bigot which he is publicly displaying today, we told them and they called us wailers. By the way, why has the government not release any chibok girls since buhari got his second term? Just wondering!