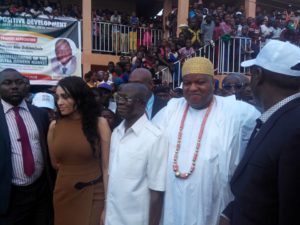 The embattled traditional ruler of Uromi land in Esan North local government area of Edo State has been dethroned by the Edo State government.

The sacked monarch, Mr Anselm Edenojie, who is the Ojuromi of Uromi, was deposed by the state government after he was earlier suspended for one year from the throne.

A letter dated Wednesday, November 9, 2016 titled ‘Deposition from Office as Ojuromi of Uromi: Addendum’ conveyed the message of the state government to him.

In the letter signed by Secretary to the State Government, Prof Julius Ihonvbere, the traditional ruler was told to “please be informed that the initial Exco decision of 26th October 2016 has been further affirmed.

Trouble started for the deposed monarch when he was told to apologise to a woman he allegedly assaulted because she reportedly refused to vote for his preferred party in the last governorship election in the state.

Instead of apologising, it was the woman that publicly begged the monarch on her knees, while the Ojuromi remained seated on the throne and his crown.

During this time, he was still under suspension for seven days.

His action infuriated the state government, which resulted to him getting one year suspension before this lates development.

Curfew Declared As Tension Rises Over Killing Of 10 In Gombe