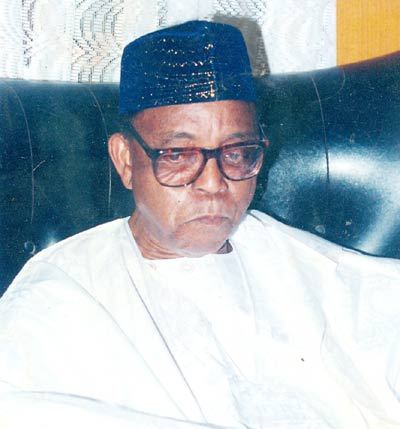 It has come to the knowledge of the immediate and extended family of the late Chief Anthony Eronmosele Enahoro, Adolor of Onewa/Adolor of Uromi, that the Onogie of Uromi proposes to invest  a former Minister of Works, Mr Michael Onolimemen,  with the title of Adolor of Uromi at a ceremony on Easter Monday.

I advise the would-be recipient once more, as I’d previously done in private, that the title of Adolor of Uromi is hereditary and subject to the rule of  primogeniture.

The Enahoro family respectfully and most emphatically appeals to those invited  to the Easter Monday event not to inadvertently give support to the  ceremony.

I continue to urge all who, by text message and email, have pledged their support that it is our intention to counter this initiative with a peaceful resolution. We know also that there are political elements in the issue whose approval  is predicated on their belief that only by erasing the memory of Chief Anthony Enahoro can their own legacy enjoy a lease in Uromi.

It is narrated here, in its full some ingloriousness with reluctance, because until my hand was forced to issue this statement, the Enahoro family strove to keep a lid on an artificially framed crisis deliberately created to pervert the legitimate succession to Tony’s title of Adolor of Uromi.

Tony is no longer with us. It is my duty to lay the facts bare to the people of Uromi; indeed to Nigerians at large, to whose causes he gave himself, his family and even his health at times when it was fragile.

We members of his immediate family may be chided for not reacting immediately when rumours began to circulate that the succession to what we knew to be a hereditary title — a hereditary title that is subject to ages-old rules of primogeniture — was being given to somebody outside the family.  Here a history of the title becomes necessary.

Tony was in his late 20s or early 30s when he became a star in the cabinet of Chief Obafemi  Awolowo’s Action Group Western Region government. Newspapers fondly branded him “Stormy Petrel of the Action Group”. He quickly became one of the leader’s favourites. Politics, being what it is, he was resented by some colleagues who reached into their pockets to play the ethnic card. It was a time of an explosion of honorary chieftaincy title awards to political leaders by traditional rulers seeking favours from newly enthroned political decision makers with patronage galore to dispense.

Tony was plain “Mr Enahoro” for the wrong reason, in an Assembly packed with newly elevated chiefs laden with coral beads in varying degrees of relevance. Snipers, who did not know the system in Tony’s Uromi homeland, among the Esan clan, tended to snub the young Minister at social gatherings. What they did not know was that Tony, who could trace his lineage back to the first Onogie of Uromi in the Eleventh Century AD, was excluded from the chieftaincy class by custom, being an “Omi-Erhanme” (royal aristocrat). His mother was the daughter of Onogie Ogbidi Okojie, the last in modern history of Uromi’s warrior princes. Tony’s father was a great-grandson of Onogie Okolo father and immediate predecessor of Ogbidi.

Tony reported his growing annoyance in Ibadan to his uncle, Prince Uwagbale, the reigning Onogie. It was agreed that an exception to the rule be made for him; hence a suitable chieftaincy title was sought for Omi-Erhanme Tony Enahoro.

Someone came up with “Adolor”. The name best summed up Tony’s service to his people. Close English language translations are “he who sews” as in tailoring; “repairer” as in reconstruction or “redeemer”. There was a hitch, however. Adolor was the name of one of the most effective Obas of Benin and custom forbade anyone to use the name of an Oba living or dead in the kingdom.

Permission of Oba Akenzua, father of the present paramount ruler, was sought and granted to Tony. It was a personal favour by Oba Akenzua whose sympathy toward the opposition NCNC, the AG’s bitter political enemy, was well-known in NCNC-voting Benin City.

Tony may have had a foresight of a future that no one else apparently foresaw at the time. He became Adolor not only of Uromi but also, separately, albeit simultaneously, Adolor of Onewa, his paternal family village in the federated principality of 21 “villages” that make up Uromi, today a local government in its own right. The attempt to foist a candidate from a village other than acknowledge the Adolor of Onewa as Adolor of Uromi was another point to the issue at hand.

It is obvious that the newly installed stool was consciously intended to occupy a highly placed position in the hierarchy.

The incumbent Onogie of Uromi maintains that the Adolor of Uromi title is honorary, which would be extraordinary protocol — that an honorary chief would be promoted third in rank, above  holders of ancient titles with territorial responsibilities at that.

The time came, however, that  somebody  was reportedly found to dislodge Tony’s legitimate heir, my nephew, Kenneth Enahoro. In the sleight-of-hand manner in which the matter was handled, official confirmation was not made until the week before this Easter weekend. It was an ambush. It made the chances of mounting a public outcry incredibly tight.

I had thought it fortunate that a well-meaning intermediary brought me together with  Mr Michael Onolimemen, the Onogie’s choice of a new Adolor of Uromi. The man had served in President Goodluck Jonathan’s administration as Minister  of Works, which speaks volumes.

One of the endearing good fortunes of not meeting certain Nigerians face-to-face is that you can live happily in a peaceful delusion.  Onolimemen sounded on the phone like a man in whose mouth butter would not melt. I have never set eyes on  him, but  he’s a fine talker on telephone!

He said he’d been in the US  completing his doctorate thesis. On the day of his return home,  a convoy of cars waited to escort him home. Instead of heading toward his Ivue-Uromi village, the lead car surprised him by driving straight to the royal palace. Awaiting him was the Onogie attended by his chiefs.

The Onogie  told the former Minister of Works that Uromi was grateful for all the wonders he had performed in the principality. In recognition of the achievements, he would be rewarded with the chieftaincy title of Adolor of Uromi.

On the contrary, when I gave a brief history of how the title came into being, my new friend sounded vexed. He told me of his last encounter with Tony. He’d had a fulfilling day listening to Tony’s wisdoms. He said he would phone the Onogie and make clear he would not be involved in what now suddenly seemed to  him a  move against the memory of the late Chief Enahoro.

Onolimemen is an aspiring politician. He had nursed a thought of governorship of Edo State. Provided he played his cards right when he was in the Ministry of Works, why not?  A chieftaincy title would be an added fillip. And Adolor of Uromi: Tony Enahoro’s title? Brilliant!

I have only recently learned of Onolimemen’s connection with my extended family. His daughter, I’m told, is married to the son of one of our myriad royal family first cousins. Until the sheer accidental offer of the Adolor title to him, Onolimemen was best known in Uromi as a  protégé of Chief Tony Anenih, another of my kinsmen, through my maternal grandmother.

Such are the complexities of Uromi society that what may seem an advantage in one district  could be seriously disadvantageous in another  Onolimemen will need more than  a godfather to appease the restiveness brewing against him in certain quarters in Uromi. That is why I  appeal to the Onogie and members of his Traditional Council of Chiefs who may have committed themselves to this misdirection to find their way out of the hole they’ve dug themselves into.

One person who can put an end to the anomaly that is going  on is  Onolimemen simply by picking his phone and calling the Onogie.

His admirers  can create another title for him in an instant. Uromi  must treat the memory of it’s proudest son  this way.

Our newspaper commentators quite rightly complain of the paucity of role models in Nigeria. Tony Enahoro was a role model – jailed three times in his young days by the British colonial  masters; kept in  detention, sentenced to 15 years years’ imprisonment after  independence for which he had given so much of his young days and more, harassed by one military regime after another, twice forced to flee abroad in self-exile where, on the first occasion, he suffered the humiliation of prison detention in England, but, on a second time, he continued the struggle in NADECO, and we should not forget the role he played in keeping Nigeria together before and during the Civil War. You may call it a colourful life. I say my brother never gave up on Nigeria right up to his death.

It is appropriate that he is immortalised in Benin City,  the capital of  Edo, his  home  state, with the House of Assembly complex named after him; appropriate that one of Abuja’s residential  crescents  named in his honour; and appropriate also that the Lagos State government named a sprawling residential estate in its capital, a city he loved, in his honour. His name  is irrevocably enshrined in British law under the Fugitive Offender’s Act which today benefits fugitives arriving in Britain, who have escaped political persecution in their Commonwealth country.

At his funeral, six years ago, glowing tributes were paid to him not only in “In Memoriam” columns but also in the impressive turn out of leaders at his graveside. Let the voices of those leaders ring out again, this time with hurt and outrage.

Invitation  is out to VIPs to present themselves at the  ceremony planned for Easter Monday in Uromi. If that still goes ahead, those VIPs who turn up cannot escape a charge that they have given moral support to a ceremony that hurts  the memory of Anthony  Enahoro. 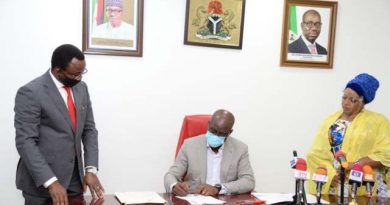 Ondo 2020: I Won’t Say Anything On Akeredolu Yet, Says Tinubu

Asokwa Will Get PM Despite Human Impediments—MCE Assures