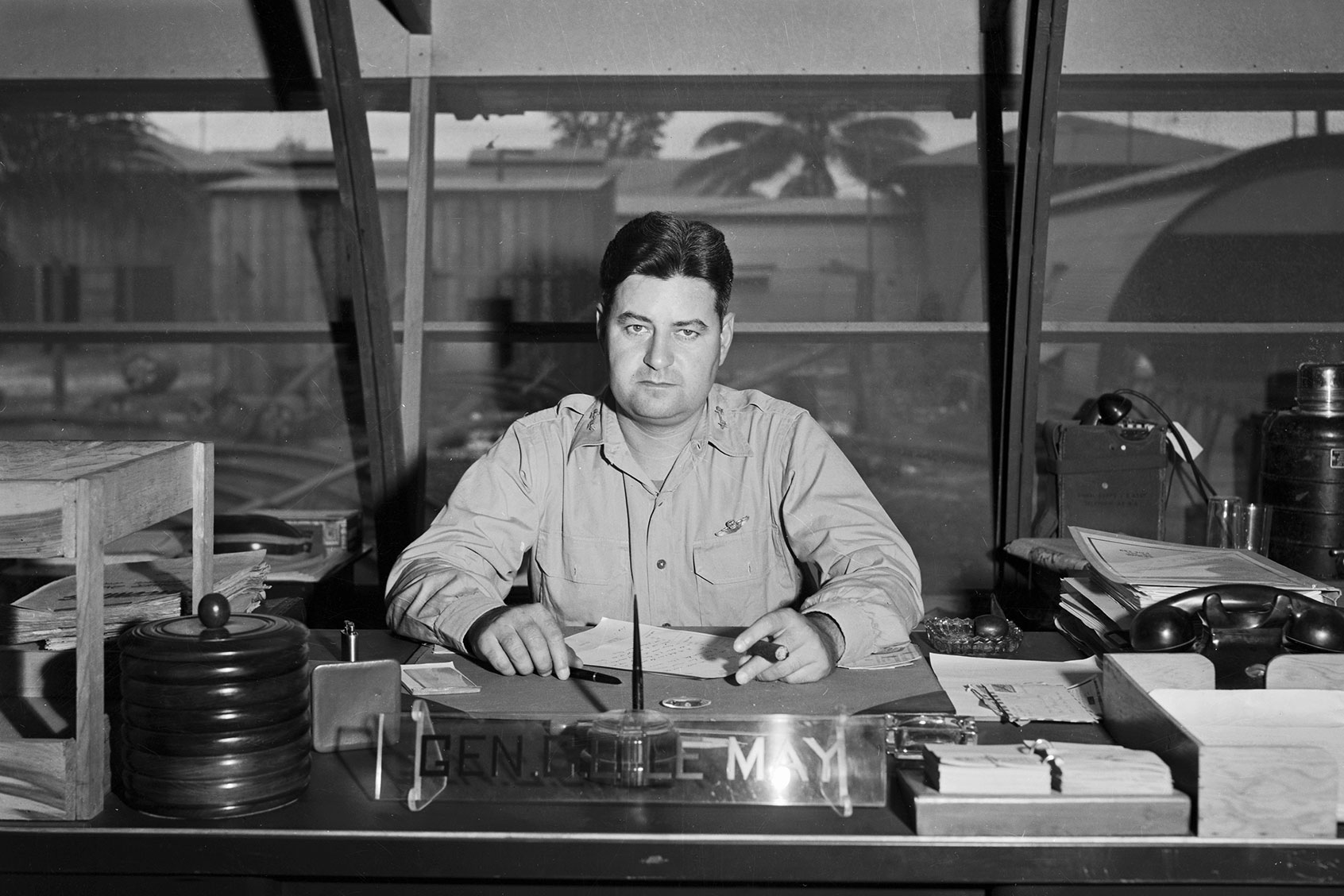 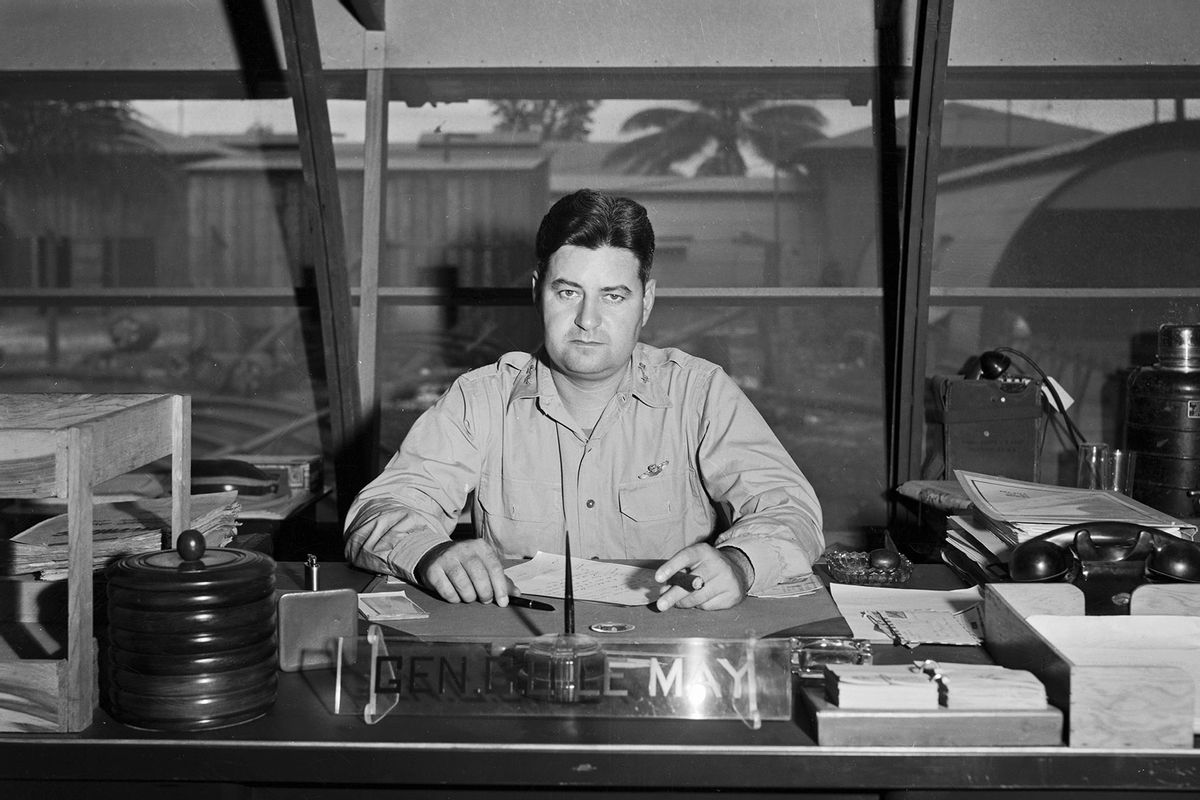 If you’ve seen the classic Stanley Kubrick film “Dr. Strangelove or: How I Learned to Stop Worrying and Love the Bomb,” you’re familiar with Gen. Curtis E. LeMay — sort of. The four-star Air Force general didn’t personally appear in that 1964 movie, but two of its most memorable characters were based on him: The cartoonishly bellicose Gen. Buck Turgidson, played by George C. Scott, who practically salivates at the prospect of dropping bombs on the Soviet Union, and Brig. Gen. Jack D. Ripper, played by Sterling Hayden, a cigar-chomping madman who embraces every far-right conspiracy theory in sight.

Kubrick and the film’s writers created the archetype of the warmongering extremist based on LeMay — and four years later, LeMay unintentionally proved them right by acting exactly like his fictional counterparts. The stakes could hardly have been higher when he did so: LeMay was chosen as vice-presidential running mate for George Wallace, the white supremacist Alabama Democrat whose 1968 third-party campaign nearly threw the presidential election into chaos. For a brief moment, it seemed that a Kubrickian caricature might come disconcertingly close to the Oval Office. Yet one seven-minute press conference wound up pretty well demolishing LeMay, and probably ending any chance Wallace had of winning. One could argue that the general revealed the Achilles’ heel of far-right politics — a tendency to succumb to beliefs that literally threaten the survival of our species and the world.

RELATED: How I learned the power of lies: Fact and falsehood in the age of Trump (and long before)

On paper, LeMay looked like a somewhat reasonable political candidate. Born into working-class poverty in Ohio, he displayed an aptitude for engineering and worked his way to a degree from Ohio State. In October 1929 — the same month that the stock market crash kicked off the Great Depression — LeMay was commissioned as a second lieutenant in the Air Corps Reserve. He served with distinction during World War II, rising through the ranks as he  led the Air Force in Europe, Japan and the China-Burma-India theater. He intuited that there was a future in big bombs of all kinds, and became an avid proponent for their development. While that put him ahead of the curve in strategic terms, he was a traditional officer who was well-liked by his men. He was also a ruthless warrior:  His air raids on Japan led to as many as 900,000 deaths.

That wasn’t controversial at the time, and LeMay’s career thrived in the postwar era. He coordinated the Berlin airlift of 1948, served as commander of the Strategic Air Command (SAC) until 1957, and by 1961 had been appointed as U.S. Air Force chief of staff. That was when LeMay’s love of bombs — he had long argued for creating more nuclear weapons and making it easier to deploy them — finally became too much. During the Cuban missile crisis he pushed for preemptive missile strikes on Soviet facilities that would quite likely have triggered a global nuclear war, and he clashed with both John F. Kennedy and Lyndon B. Johnson over their reluctance to be more aggressive in the Vietnam War. After losing his job in 1965, he co-wrote an autobiography that summed up his philosophy: He believed the U.S. should tell the North Vietnamese that if they did not surrender, “we’re going to bomb them back into the Stone Age.”

George Wallace intersected with LeMay three years later. Wallace had become a national figure after becoming governor of Alabama in 1963 and laying out a clear agenda in his inaugural address: “Segregation now! Segregation tomorrow! Segregation forever!” He immediately became the national champion of opposition to the civil rights movement, standing in front of the University of Alabama’s doors to oppose desegregation and repeatedly threatening to take his white supremacist ideology to the national stage. When he ran for president as a third-party candidate in the 1968 election, he shocked the political world by becoming a serious contender. At one point, Wallace polled in the low 20s, barely below Democratic nominee Hubert Humphrey, although both trailed Republican nominee Richard Nixon, who was in the mid 40s.

Wallace posed a problem largely because of the Electoral College, which has bedeviled American politics both before and since. To be elected president, a candidate must receive a majority of electoral votes. (Then as now, the magic number is 270.) Wallace had Alabama locked down and was likely to win several other Southern states, such as Louisiana, Mississippi, Georgia and South Carolina. If he could swing a couple of other states elsewhere in the nation, neither Nixon nor Humphrey would have won an electoral majority and, under the 12th Amendment, the House of Representatives would decide the election. Wallace hoped to do what John Quincy Adams had done in 1824 after receiving less than 31% of the popular vote: Strike a deal with the House speaker to win such a “contingent election.” If that didn’t work, Wallace believed he could force either Nixon or Humphrey to give him significant power in their future administrations.

Then Wallace picked LeMay as his running mate. One press conference later, their campaign had fallen apart.

“I think there are many times when it would be most efficient to use nuclear weapons,” mused LeMay. But people “throw up their hands in horror” because of “propaganda that’s been fed to them.”

“We seem to have a phobia about nuclear weapons,” LeMay told the stunned group of reporters. After mouthing clichés about how of course he would prefer to avoid war, LeMay said, “I think there are many times when it would be most efficient to use nuclear weapons. However, the public opinion in this country and throughout the world throw up their hands in horror when you mention nuclear weapons, just because of the propaganda that’s been fed to them.” He even challenged the scientific consensus that nuclear radiation was bad for wildlife, insisting that flora and fauna from fish and birds to coconut trees and guava bushes were flourishing in the Bikini atoll.

That, as they say, was the ballgame. Some historians have argued that organized labor’s mobilization and the general power of the Democratic Party machine ultimately helped Humphrey pull votes that might otherwise have gone to Wallace. That may well be true, but the trend in both polls and political momentum was the same. Before that press conference, Wallace was the champion of angry white voters around the country, not entirely unlike another right-wing rabble-rouser who would be even more successful 48 years later. After it was over, he was a bumbling would-be demagogue whose running mate had terrified voters with the prospect of nuclear holocaust.

Wallace and LeMay probably should have learned their lesson from 1968 Republican nominee Barry Goldwater, who was pilloried by Lyndon Johnson over accusations that was willing to risk nuclear war, and who lost in a historic landslide. As mentioned, LeMay had already inspired two different parody characters in a widely acclaimed and popular movie. Maybe the lesson for future political candidates goes like this: Don’t threaten the end of civilization and expect to win. On the other hand, if your opponent advocates policies that might extinguish the human species — whether through nuclear war, climate disaster, ever-worse pandemics or capitalism run amok — you might want to bring that up, and not just once or twice, but all the time.

Read more on the dark corners of American history: