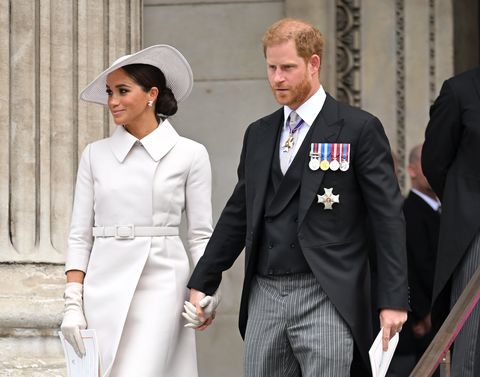 Meghan Markle and Prince Harry spent their U.K. visit largely out of the spotlight, slipping in Wednesday and then leaving Sunday before the Platinum Jubilee ended. But the Duke and Duchess of Sussex deliberately chose to keep a very low profile during their trip, a source who knows the couple tells People. That source said no one should be surprised by that choice; their visit was rooted in their loyalty to the Queen above all.

“They aren’t part of the [working] royal family anymore, and that’s a decision they have taken—but maybe [the public] hasn’t quite accepted that yet,” a source said of public expectation that Meghan and Harry would be out at more events. “Yes, they were low-key. They paid their respects and went home.”

“They were really here to see the Queen, and they did,” the source added.

Meghan Markle and Prince Harry at the national Service of Thanksgiving.

The couple notably did not publicly interact with Kate Middleton, Prince William, Prince Charles, or Camilla, Duchess of Cornwall, despite being at two events with them. At Trooping the Colour on Thursday, Harry and Meghan were photographed watching the parade inside the Major General’s Office with other senior members of the royal family. They were not part of the balcony flypast moment or carriage procession.

During the national service of Thanksgiving on Friday, Meghan and Harry were photographed arriving and leaving at different times than Kate, William, Charles, and Camilla. They were not seated close to the four working royals either.

These decisions helped them avoid photographed reunions—and ensured their relationship with the royal family (and any talk of tension between Harry and William) did not dominate media coverage.

Meghan and Harry released a photo of their daughter Lilibet on her first birthday after they returned home. They celebrated Lili’s first birthday with an “intimate backyard picnic” at Frogmore Cottage on Saturday, June 4, their spokesperson confirmed, with close friends and family invited. Kate and William did not attend as they had a royal engagement in Wales for the Platinum Jubilee. 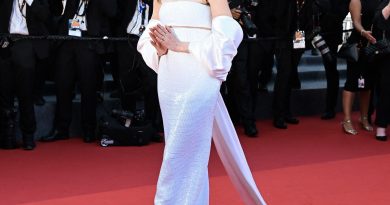 “One of the worst offenders”: Palin spreads more misinformation than any GOP candidate, study shows