The South-East socio-cultural organisation, Ohanaeze Ndigbo, has rejected the candidacy of the Senate President, Ahmad Lawan as the consensus candidate of the ruling All Progressives Congress for the 2023 general elections.

The body alleged that giving Lawan APC presidential ticket would be a disadvantage to the ruling party at the 2023 polls.

The body said, “The announcement of the APC National Chairman Senator Adamu that Senator Ahmad Lawan is the APC consensus candidate for 2023 depicts immaturity and is a game over for the ruling party to retain power at the centre, as this miscalculation will backfire on the ruling party’s chances to win 2023 elections and we call on President Buhari to caution the party’s National Chairman, Sen. Adamu, who appears to be biased and compromised by hawks in the party.

“We salute the courageous stance of APC Northern Governors to reject the APC National Chairman’s choice for consensus; those pushing for the choice of Ahmad Lawan are oblivion to the fact that a political tsunami is sweeping across the country with the resurrection of the third force in Labour Party, Atiku and Lawan will lose the Presidential election against a united front of Nigerians and Southerners behind the third force.

“Senator Ahmad Lawan lacks the personality, and character, and appears clueless to fit into the legacies of President Buhari which only an Igbo can do; as a rubber stamp Senate President, his candidacy will crash out the ruling party from Aso Rock.

“Ndigbo rejects the candidature of Ahmad Lawan, a man who couldn’t find solutions through the legislative process to the insecurity challenges of the Northeast, this man will lead Nigeria into disintegration and collapse of Nigeria’s sovereignty and unity”, to be forewarned is be forearmed,” he added.

But the APC governors have rejected Adamu’s choice of Lawan, insisting that power must shift to the South in 2023. 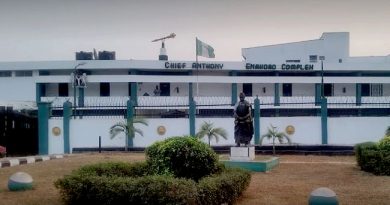