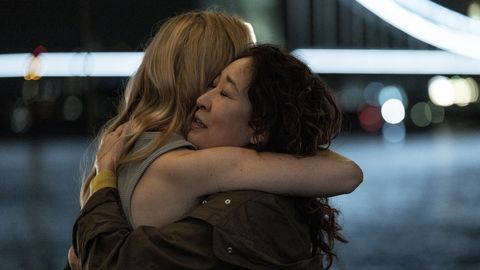 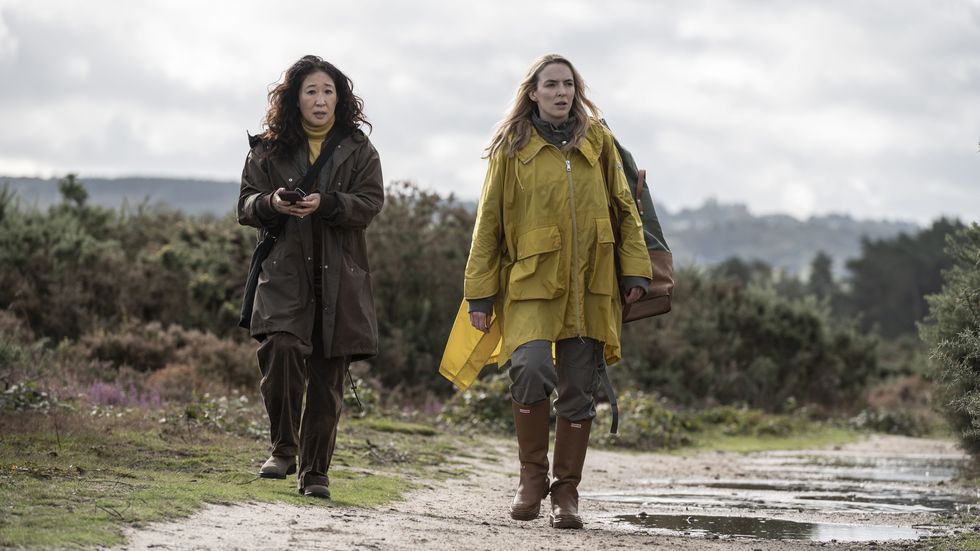 Spoilers for the Killing Eve finale below.

So, now you know: The anti-hero dies at the end. In the series finale of Killing Eve, Villanelle, played with chaotic fervor by Jodie Comer, met her end in the watery depths of the Thames after executing the members of the Twelve onboard the Dixie Queen. But this bittersweet conclusion wasn’t always where the beloved series was heading. In fact, the writers, producers, and actors discussed numerous possibilities for Killing Eve’s final moments, including an ending where Sandra Oh’s Eve and Villanelle jumped off a cliff in the style of Thelma & Louise.

“It was really difficult to find the best ending,” admits season 4’s head writer Laura Neal, speaking to ELLE.com ahead of the finale airing. “The truth is we talked about loads. We were always discussing ‘What’s the truth of the endpoint of these characters journeys?’ If we look at where Eve and Villanelle began and we look at what’s happened to them across the four seasons, what’s the truth of the end point? It would have been easy for it to feel very maudlin, I think, or to go completely the other direction and make it feel too funny. So striking the right balance between the two of them felt really important.”

Eventually, the writers settled on setting the finale on the Thames, right under Tower Bridge, where Eve and Villanelle met in the final episode of season 3. The Dixie Queen is a real boat moored nearby and it took about a week of filming to complete the finale sequence, where Villanelle and Eve infiltrate a wedding on the boat in order to find a secret meeting of the Twelve. The production was even able to get Tower Bridge to lift specifically for the scene, which Neal still finds unbelievable. The underwater scenes were shot in a tank, but the parting scene of the show, as Villanelle urges Eve off the boat while shots are fired at them at the behest of Carolyn (Fiona Shaw), was the last thing the Killing Eve team ever filmed.

Villanelle (Comer) and Eve (Oh) embrace in their final moments together.

“What was really surreal was the last shot we did was the last shot of Villanelle ever,” Comer remembers. “So that was weird because once I’d done that, it was done. There was something about finishing on that final shot of her that was actually perfect in a way. But it was weird. It was really weird! What was great was Sandra and I were together for the whole of that last week, so we got to experience that together with the crew.”

For Comer, Villanelle’s death felt tonally and thematically right for the character. After seeing her struggle over the course of season 4, attempting to do what’s right and then falling back in to old (murderous) habits, it was time for Villanelle’s story to come to a rightful end.

“It was inevitable,” Comer confirms. “She’s like a cat with nine lives. What I loved about the moment was that was a really selfless act that she did that caused it. It felt right that in that moment she protected Eve. There was something about that shielding, I think, that signified how much she had changed. She was trying so desperately to change at the beginning and I don’t think she ever realized how much she had, which is so sad. That moment really shows how Eve changed her life.”

For Oh, it may not be the “right” ending, but it was the best possible version of an ending, thematically and emotionally.

“I loved the sequence on the boat where we intercut between Eve on the top deck dancing and full of life and Villanelle below killing the Twelve,” Oh explains. “We see the essence of the characters. And we hold on Villanelle watching Eve dancing and it’s emotional for her. I believe this is a moment of understanding for [Villanelle]. Because in the moment after we see how [Villanelle] has changed. She saves Eve. Villanelle had to die to bring the show to an end point. Honestly at the beginning of 2020 when discussing the finale it was the other way around, but through the pandemic we changed tracks. Villanelle goes onto more ethereal realms. And Eve is left to survive.”

Neal doesn’t see Villanelle’s demise as tragic, either. For her, the character has simply ascended to a new plane of existence—an explanation that may help fans feel less upset about the finale. Villanelle’s body floating away in the Thames was also an opportunity to allow Eve to finally move on from the obsessive, problematic relationship between the pair.

“I think the reason we ended up killing Villanelle was because we wanted to give Eve new life,” Neal explains. “For Eve, the moment where she burst out of the water was always something we had right from the very early iterations of the ending. We were really into Villanelle dying kind of to save Eve. And I think there’s a remnant of that still in the final version. That felt really poignant to us and it spoke to how far Villanelle has come on her journey, that she can do this final act and it’s for someone and it’s kind of a selfless act. So it isn’t so much an ending for her, but a kind of transcendence. In my head, that’s not a death of Villanelle. That’s the elevation of Villanelle to another realm. We talked a lot about like her being too big for this world, like the world not being able to contain Villanelle. We wanted to inject that spirit into that moment, as well.”

The closing image, of Eve emerging from the Thames’s surface, crying out in a combination of pain, anger, grief, and freedom, was essential to getting the finale right. Neal and director Stella Corradi spent a long time in the editing room to ensure the moment had maximum impact. Oh is still questioning how the scene will land, but she does feel it’s right for Eve and for the show.

“The last shot of Eve in the water howling at the world was actually the last shot I filmed,” Oh recalls. “We were under time pressure, we had camera issues and they called the day. It felt ambiguous. I didn’t know if I got it. It was an extremely emotional day. I think one of the special things about the show is—hopefully—how satisfying it is to not get what you want, tied neatly in a bow. It was never neat between the characters, so Eve’s ending leaves us with the question: How will she go on?”

According to the writers and producers, the finale is the definitive ending of Killing Eve. There are no plans for a reboot or spin-off (as of now). Speaking on the show’s set back in October, executive producer Gina Mingacci confirmed, “This is the end. This is the end of the line. I think everybody’s very happy with how it’s going to end, at least on this side.” But that doesn’t mean Eve and Villanelle won’t live on in the minds of the fans.

“I hope that when ‘The End’ comes up [viewers] think that Eve is going to go on and have this amazing life,” Neal says. “She’s escaped. Carolyn thinks she’s dead. She can have the life that she chooses to live now. In my head, she’s going to take everything that Villanelle has given her into this new version of her life. And Villanelle will live on in Eve.”