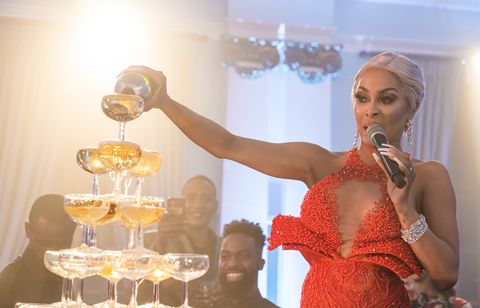 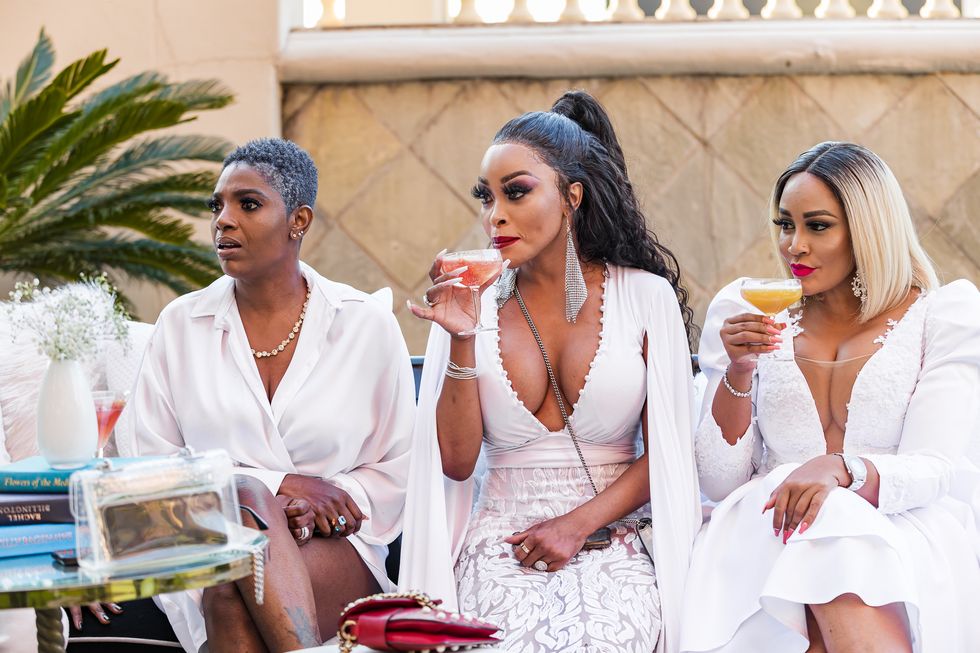 If you were looking for a reality series that evokes luxury and success amongst the African elite, then Young, Famous & African needs to be on your list. The new reality show, now streaming on Netflix,, follows a group of successful African entertainers and entrepreneurs in Johannesburg, South Africa. The series has all the ingredients that make for a juicy reality Netflix binge: a few parts glamour, a sprinkle of mess, and finished with a hefty spoonful of drama.

Viewers who have been yearning for a show to bring the elements of successful series like Bling Empire and Selling Sunset to the African continent will want to meet the eccentrically vibrant cast of Young, Famous & African. Get to know them here.

Some may call her a golddigger, but she would say she’s savvy and knows how to get things done. Khanyi is the self-proclaimed OG of the group who embodies the kind of wealth she looks for in the men she pursues. The proud South African actress, media personality, and businesswoman tackles her golddigger reputation head-on and doesn’t apologize for knowing what she wants and setting the bar high for the men who fancy her. With her younger boyfriend, an alleged fugitive, she isn’t afraid to know how she feels and hooks up her friends – regardless of their marital status.

Diamond is a Tanzanian playboy that brings Hollywood stardom wherever he goes with 13 million followers on social media and even the occasional military detail because of his Rihanna-level fandom. He co-parents two children with his ex-wife Zari Hassan and returns to Johannesburg to be closer to his family despite the tumultuous relationship riddled with infidelity, but that gets a little blurry when he goes for Nadia and Zari shares close encounters with Andile.

Annie is a star looking to expand her empire. The actress and entertainer has already established herself onscreen in Nigeria and came to Johannesburg looking to expand her reach across the continent. Even though she has it all together on the outside, her issues with her estranged husband, Innocent ‘2Baba’ Idibia, become the focal point of her story throughout Young, Famous & African, along with dealing with her daughter’s health issues and sacrificing time to invest in her kids’ careers.

The Nigerian superstar lives larger than life, just like his music persona, but that often causes friction in his marriage with his wife, Annie. The latter is trying to repair their relationship after the struggles with their two children.

Also known as Zari Hassan, the Tanzanian entrepreneur likes to be known for her business savvy – but as we see on the show, she also earns a reputation for the drama that follows her. Throughout the series, Zari is often on the other end of a disagreement with cast members, like Annie and Khanyi. After a public breakup and cheating scandal with her ex-husband and the father of two of her five kids, Zari co-parents with Diamond while also exchanging eyes with Andile.

Naked (real name Quinton Masina) is a big-time DJ who loves life and enjoys it to the fullest. Despite having control of his life, his relationship with 28-year-old Kayleigh Schwark is rocky. Outside of his romance, Naked is also often the voice of harsh reason for friends like Diamond and Andile when it comes to quarrels involving multiple women.

Nadia is a stylish woman who loves fast cars and a good time. The successful first-generation South African-Zimbabwean rapper and entertainer is confident about what she wants, and that’s how she ended up with American rapper Vic Mensa, whose father is from Ghana. (Though she confirmed they broke up in August.) Nadia is close friends with Khanyi and also finds herself receiving sweet gestures from Diamond while he’s in Johannesburg.

The Nigerian superstar stylist (whose real name is Jeremiah Ogbodo) is in town with his best friend Annie Macaulay-Idibia to make some moves in his career and loves a good party. He lives up to his name when it comes to his style and enjoys bringing fun to the group, especially when it comes to Annie while she deals with problems with Innocent.

The quiet, dapper entrepreneur may be excellent and easy on the outside, but he can also find himself predicaments with women. In the series, we often find him talking about scandalous relationships with his two friends, Diamond and Naked. Things get very interesting and serious between him and Zari, with his steady advances on the Tanzanian entrepreneur despite his close friendship with Diamond.

The fitness buff and semiprofessional soccer player is trying to create a new life with her 40-year-old boyfriend, Naked. She often looks to her friends Nadia and Khanyi for advice about their relationship as she tries to reconcile her frustrations.

Gaspar Noé on dementia in “Vortex,” witches in “Lux Æterna” and the “shamanic side to cinema”