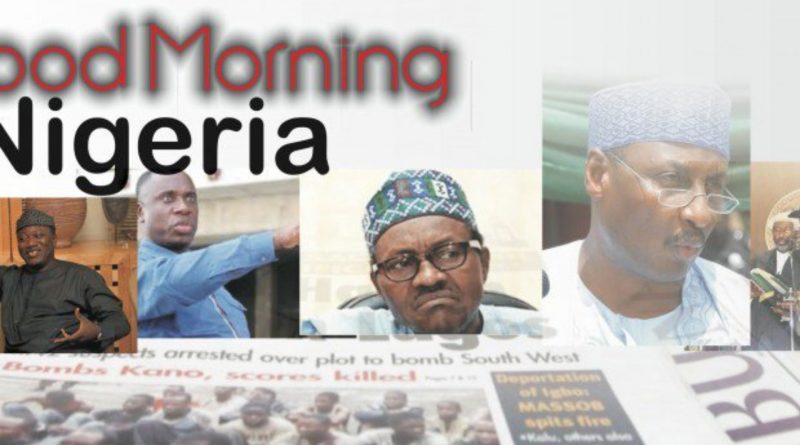 1. The Nigerian Army, yesterday, said the troops of 82 Division have dislodged some camps belonging to IPOB, and its militant wing, the Eastern Security Network, ESN, in Azia, Orsumoghu, Lilu Forest, Mbosi and Uli in Ihiala and Orsu Local Government Areas of Anambra and Imo States. The troops uncovered
decomposing bodies of kidnapped and murdered victims, allegedly dumped in a deep well by members of the IPOB and the ESN.

3. Governor Nasir El-Rufai of Kaduna State has said reports of preliminary investigation linked some serving police and military personnel to bandits. He spoke during the weekly briefing organised by the Presidential Communication Media Team at the Presidential Villa, Abuja.

4. Some Nigerians, who are currently trapped in Ukraine as a result of the crisis with Russia, have ruled out the option of returning to the country. In an interview yesterday, they expressed cynicism about the federal government’s promise to evacuate willing Nigerians from the war-torn country following Russia’s invasion.

5. President Muhammadu Buhari says he is looking forward to becoming a former occupant of the highest office in the country. Buhari said this during a courtesy visit to the palace of the Emir of Lafia, retired Justice Sidi Bage Muhammad I, on Thursday.

6. As tensions continue to rise in Ukraine over the Russian military operation, the Nigerian Embassy in Ukraine has told Nigerians resident in the country to be responsible for their personal security and safety. Many are trapped in the crisis, with global leaders unable to resolve the crisis, despite several threats, sanctions and appeals.

7. A Presidential aspirant on the platform of APC, Bola Tinubu, yesterday, said he is capable and fit to pilot the affairs of the country to greatness if allowed to rule in 2023. Speaking during his visit to the palace of the Ooni of Ife and Owa Obokun of Ijesaland, in Osun State, he said Nigeria is endowed with both human and natural resources, saying the country only needs the right person to harness its potential for greatness.

8. Six persons, including two policemen, have been confirmed killed in what is believed to be a coordinated robbery attack on commercial banks in Uromi, Esan North-West local government area of Edo State. It was gathered that large sums running into millions of naira were carted away by the suspected criminals.

9. A pregnant housewife, Jamila Ardo, has been remanded for allegedly kidnapping herself and collecting a ransom from her lover. Ardo, who hails from Wauru Jabbe, in the Yola South Local Government Area of Adamawa State, allegedly abducted herself and collected the sum of N2m from Mallam Adamu Ahmed of the Federal Capital Territory, Abuja.

10. Kaduna State Governor, Nasir El-Rufai, on Thursday in Abuja, said he was not nursing any ambition in 2023 but would support any candidate who emerged from the zoning arrangement, be it from the South. El-Rufai said this during the weekly ministerial press briefing organised by the Presidential Communications Team at the Presidential Villa, Abuja.

Central Bank Governor Emefiele, Ministers, Other Buhari’s Appointees Contesting For President Were Sacked But Given Deadline To Save Face— Presidency Sources