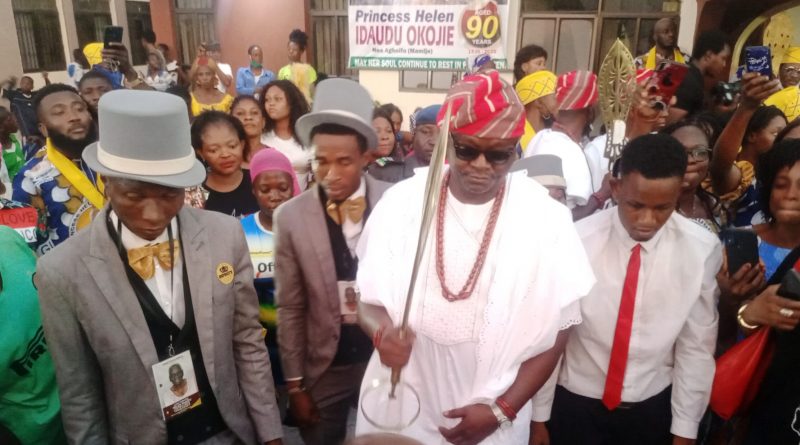 BENIN CITY – IT was a torrent of tributes from friends, family members, associates, and others as 90 years old Matriarch of Okojie family, Princess Helen Idaudu Okojie in Uromi, Esan North-East local government area of Edo state was laid to rest.

She was described as a bulldozer and kind-hearted woman who at a time became a major distributor of Ibru foods.

The ceremony attracted the high and the mighty across the three senatorial districts of the state from the business class, politics, commoners, people from academia, religion, and others.

In his homily, Rev Godwin Onowanse said everything on earth has an appointed time and urged the people to use their time judiciously to the service of God and humanity like Princess Okojie. “It is appointed unto man to die and after that judgment. For everything on earth, there is a season. Our mother that we are celebrating today lived by the grace of God. She lived in Uromi and raised children that are today all over the world, it can only take the grace of God to do this.”

Among her many children is Prince Joe Okojie who is the immediate past Special Adviser on Agriculture to Governor Godwin Obaseki.

He said her mother taught her to always be there for the needy; a virtue he said has guided him in life. “Words are not enough for me to describe my late mother, she was a consequential lady. All I can really say is that she taught me a lesson and the lesson is that we should always endeavour to render help where help is most needed and that has driven my quest to relate and reconnect to the grassroots.

“As you can see, most of the people you are seeing here today are grassroots people and a few of my friends that you will consider as elites but that does not mean that I don’t have a relationship with the elites but it only means that I am happiest when I am with my people at the grassroots.

“At this point it is not just about leaders, it is about the people. Once you have crossed fifty, you are closer to where you are going than where you are coming from so it only behooves on you to do good and if you must err, err on the side of the people.”

Former Foreign Affairs Minister, Chief Tom Ikimi summed up the event when he said “it is good if you have the opportunity to give honour to your mother and an event of this nature is a very successful one.”

Former Minister of Works, Arch. Mike Onolememen described Princess Okojie as a mother who never discriminated between her biological children and others who came her way.

He said “Joe and I were here together, we grew up together, we were playmates and the mother always took care of all of us. She was a wonderful mother that is why we are very happy to be here today to celebrate her. She is indeed a unique woman, she was an extraordinary woman, she was a mother to all of us, she never discriminated and may God bless her soul.”

To the Speaker, Edo State House of Assembly, Hon Marcus Onobun, the children should inculcate the virtues of Princes Okojie on their children so they would be celebrated more.

He said “What we are seeing shows that she had lived well and you can see the children are all happy to celebrate their mum and of-course one of our own, Joe Okojie brought us here and it shows that he is a man of the people and the people are happy with him and they are at home with him, that is why you see that this is more-or-less a carnival and we have come to join him to celebrate his mother.

“The children should also inculcate good virtues in their own children because it is the values she inculcated in her children that has brought about what we are seeing today so they should replicate same to see that by the time God calls them, they will also be celebrated like this and even better.”