I CAME across a Cable News Network, CNN, interview with a man identified as the Ugandan Minister of Internal Affairs. It was anchored by the network’s North American Correspondent, Larry Madowo, who clearly was being threatened.

Madowo, a Kenyan journalist who had also worked for the British Broadcasting Corporation, BBC, had to go into hiding in 2018 when he had a disagreement with the Kenyan government over press freedom. Now on air, a Ugandan minister was making a veiled threat because Madowo asked uncomfortable questions about 177 people detained by the military for their political choices.

Everything about the video seemed okay, including the CNN logo and the fact that the journalist conducting the interview is a serving CNN correspondent. I posted it on a serious WhatsApp platform on August 27, 2021. Four days later, I found out that the ‘interview’ was a prank. Yes there was a CNN interview conducted by Madowo with an Ugandan Minister.

However, it was not its Internal Affairs Minister, but with Foreign Minister, General Jeje Odongo. So, the original interview was doctored and circulated to the world with no indication it was a prank and without any warning or caveat. Lies were deliberately spread against Uganda.

In a sense, we are victims of a world in which reality can be substituted with illusion, and lies passed off as the truth. Falsehood has become a pandemic with Donald Trump when he was American President, as the super spreader. The research results  of the Washington Post of  January 24, 2021, revealed that during his four-year presidency, Trump told a total of 30,573 lies or inaccurate claims.

That means that he told 7,643 lies per annum; 637 monthly or 21 lies for everyday he was in office. Only Trump broke his own record with 503 false claims or lies in a single day; that was on November 2, 2020. But lies can be quite rewarding as 74,216,154 adult Americans rewarded Trump with their votes in the 2020 presidential election.

Also, one of the biggest beneficiaries of lies, is an Italian immigrant in America, Charles Ponzi, who in 1920 tricked thousands of Americans into investing in a phoney postage stamp  scheme with a promise of 50 per cent return on investments every 90 days. Every time a new investor paid, he used the money to off-set the returns of earlier investors.

At a point, Ponzi raked in an average $250, 000 daily or about $3 million by today’s calculations. That year, he was charged with 86 counts of mail fraud. He was such a smooth operator and so good that such schemes were named after him: Ponzi Scheme.

In this age, the truth is no longer reality; like religion, it is what you believe. On  the other hand, what you disbelieve is not the truth or cannot be the truth because the truth depends on who is saying it, to whom and in what circumstances. The truth is like market forces; its price is determined by a perfect system of ‘Willing Buyers’ and ‘Willing Sellers’. Its value is determined at the stock exchange.

The truth, like Western Democracy, is a game of  numbers or the numbers; however you get them or arrive at the numbers is not important. The truth is no match for  falsehood; it is at best a sparring partner. In most cases, the truth  is like the 2021 Arsenal football team: fabled gunners who can neither shoot straight nor defend their position.

On the other hand, the lie is so sweet that it does not need sweeteners. It is also quite easy not just to put on the garb of the truth, but in fact, to assume its identity. Joseph Goebbels,  Nazi Germany’s Minister of Propaganda, was quoted as saying: “If you repeat a lie often enough, it becomes accepted as truth.” This is what psychologists call the “Illusion of truth”. That is why after decades of the United States declaring countries like Iran, Cuba, Venezuela, North Korea and Syria as ‘state sponsors of terrorism’, we have come to believe this as the truth.

Nigeria has been beset by terrorism since 2009. So many leapt for joy when in September 2015, the new government of President Muhammadu Buhari announced it would wipe out Islamic terrorists within three months. When the period expired, we expected the government to tell Nigerians it had been over confident and would need far more time. Yes, the government reported back to Nigerians, however, it was not to ask for more time, but to report that it had “technically defeated” the terrorists.

Today, six years after, with the war against terrorism becoming full blown and government repeating its claims, I am beginning to believe that Nigeria has defeated terrorism. By the way, please, don’t ask me if this  Goebbels quote is true, or one of the endless lies peddled by the allied powers and their propagandists against Adolf Hitler and his party.

In most cases, the truth is not pleasant; it might be better to ignore or marginalise it. Better still, to turn it into an orphan. Like we say in Nigeria: “The truth is bitter.” So it might be better to ignore it, or take it with sweeteners of lies. That is why in many climes, governments can ignore or forgive you for telling lies against them, but will be quite brutal for revealing the truth. This  is why official files are marked “Secret” or “Top Secret.” It is also why the citizen is told: “Keep our secrets, secret.” To act otherwise, is to be labelled a spy which can lead you to prison or even death.

This is why Julian Assange is being made to waste and live out his productive life in British prison. His unforgivable crime is that he uploaded mega tonnes of the truth about American atrocities on the internet. If he were dealing in falsehood, his lies might simply have been exposed and he is told to go, and sin no more.

Unfortunately, many of us who believe in the truth, will not make Heaven. The Holy Book decrees: “You shall know the truth and the truth shall set you free” (John 8:32). But how can we know the truth when we can hardly differentiate truth from falsehood; when the face of the truth is buried in the funeral piles of falsehood waiting for the fires to be lit?

How do we recognise the truth when it has undergone serious battery requiring  many plastic surgeries and face lift? Perhaps the truth is whatever pisses you off. This may be the reason the American journalist and feminist, Gloria Steinem made the famous variant: “The truth will set you free, but first it will piss you off.” 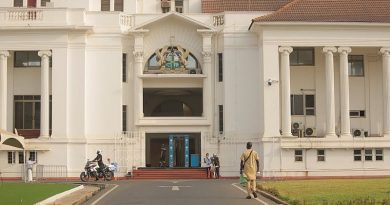 The Asantehene, Otumfuo Osei Tutu II, has called on political parties to deliver all their promises when they win political